This week’s episode of Star Trek Discovery, “Choose to Live”, takes its name from the Qowat Milat, an order of “warrior nuns” from Ni’Var. That’s right, Space Nun Ninjas who tell their potential murder victims “Choose to live” or die by their tan qalanq blade. Discovery fans will remember Captain Burnham’s mother Gabrielle appeared as a member of the Qowat Milat order in S03E07 “Unification III” (though Star Trek: Picard was the first to introduce the Romulan order). Gabrielle Burnham is back, and she’s teaming up with her daughter to hunt down a Qowat Milat sister who has murdered a Starfleet officer over dilithium.

But what about the gravitational anomaly? Well, it’s now called the Dark Matter Anomaly so that we can have a convenient abbreviation, the DMA. One of the two main subplots covers the DMA. Commander Paul Stamets has a new hypothesis: the DMA is a primordial wormhole. The data, however, is missing a signature tachyon presence to prove his hypothesis. So President T’Rina of Ni’Var, takes Stamets and Cleveland “Book” Booker to the Ni’Var Science Academy (which has an uncanny resemblance to the Jedi Council Chamber, a detail others noted on Anthony Rapp’s Twitter feed this week). 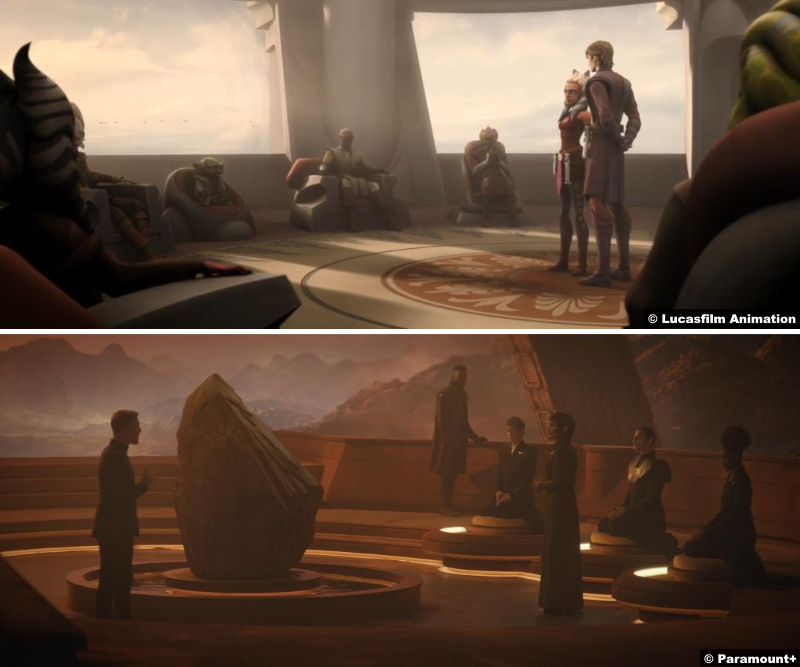 The Science Academy goes into meditation on Stamets’ hypothesis (poor Stamets wasn’t briefed on Ni’Var Science Academy protocols, which I find weird since he was about to take a job at the Vulcan Science Academy in Season 2), and they refute his proposed solution without evidence of tachyons. President T’Rina points out that by using a Vulcan Mind Meld with Book, she would be able to confirm the presence of tachyons by whether or not Kwejian’s atmosphere went a blue tinge (there is none; Stamets was wrong again). This doesn’t sound very scientific, but hey, Vulcan Mind Meld! That T’Rina is so attentive and sensitive to Book in their scenes enhances their connection. Book taking the initiative to find closure—and seeing him not totally lost in grief at the end—is one of the two satisfying emotional peaks of this episode.

The second emotional peak is Gray Tal’s incorporation. When he finally awakens, to be honest, I wasn’t prepared for it to be so emotionally resonant. I was glad to see Guardian Xi make a return to help Gray transition from Adira’s soul remnant into the synthetic body. It made me hope for a “Forget Me Not” (Discovery S03E04) style Trill-Joining-Vision and all the psychological issues Gray has talked about to Adira up to this transition operation… but I guess the showrunners decided it would be better to take baby steps. I appreciate that TV writers delivering a science fictional analogy of gender transition must tread lightly, but if there’s any show on TV that could pull it off, it’s Star Trek: Discovery. A bit of a shame they didn’t give it more consideration, but I have a feeling we’re not done with Gray’s transition just yet.

Those are the two side-plots, but what about space politics? I do love space politics, and here again, we have Federation President Laira Rillak pushing her rebuilding agenda even in the midst of a Qowat Milat assassination over dilithium. She tells Burnham to take the lead, and assure they bring back the criminal only to politely hand the murderer over to Ni’Var to butter them up for rejoining the Federation. Starfleet Admiral Vance and Burnham are her tools—or her orchestral musicians, as Vance puts it in his more favorable analogy—to build her vision of a bigger Federation. (Yeah, I still don’t trust her.)

The main plot is to capture the Space Nun Ninja Murderer, J’Vini. Borrowing Book’s ship and decked out in new sleek Federation security gear, Burnham takes her mom, Tilly, and a Vulcan Qowat Milat sister to a moon. But then Gabrielle makes the second Star Wars reference of the episode with the revelation that “this isn’t a moon, it’s a ship” filled with stasis pods of an unknown alien species, the bug-like Abronians. 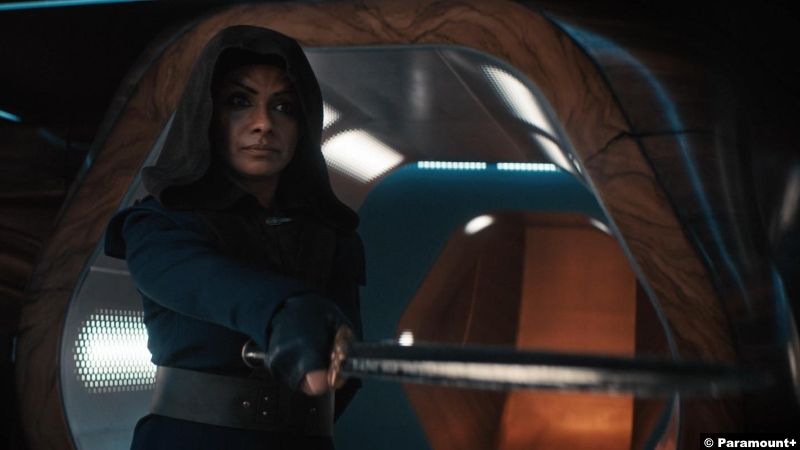 “I didn’t want more blood to spill.” Then talk and don’t murder!

So J’Vini’s murders make up for the fact that she’s trying to save the last of a hibernating alien civilization? In any case, she’s a champion of an entire species and protects them from grave robbers who’d kill the sentients for the valuable latinum in their bodies. The stasis mausoleum has an impressive biopunk Giger-esque vibe. Seeing all the systems come back online is genuine sense-of-wonder science fiction. Starfleet saves the day, not the Qowat Milat.

The whole “Choose to Live” line, sure it’s badass, but I put forth another option to this Qowat Milat: Choose Not to Murder. J’Vini’s excuse to murder is framed as some absolutist Qowat Milat ideology1 given in dialogue spat out so fast between other actions that it feels like it’s supposed to be forgotten. This Qowat Milat reasoning BS is paved over so viewers might not catch that it’s BS. The actor gives a better performance than her writing provides for, in my opinion2, but her noble motivations are veiled only to push conflict and plot. Under closer inspection, it makes little sense in light of what she’s trying to accomplish.

Complaints about the flaws in the antagonist’s motivation aside, I was impressed by this episode’s thematic coherence on being lost. This episode could have felt disjointed, piecemeal, but the theme is omnipresent throughout the three plots—and even in the minor character arc scenes. The emotional impact resolving the finding of the Path, so to speak, brilliantly ties together the three stories.

7/10 – “Choose to Live” is an action episode with emotional character side-stories, and in that regard, it’s a success. Despite the flaws in the catch-the-assassin plot, Gray and Book’s triumphs in their respective stories pick up the slack.

1 I’m reminded of TNG S01E15 (yeah, first season TNG, yikes) “11001001” with the alien Bynars. Their whole sentience is based on binary thought processes, and so they steal the Enterprise-D to save their planet and species. Of course, they’d have willingly helped, but the Bynars could not risk the even <1% chance of total eradication of their species. A whole episode is built around (some gross misogynistic holodeck stuff and) an alien mind that cannot conceive of a calculable risk… and J’Vini is in the same boat as them.

2 In fact, I would be happy to see Ayesha Mansur Gonsalves return to play J’Vini for a redemption arc.