Star Trek Discovery S04E02 Review: Anomaly – What is it?

Throw the political conflict out the window, it’s time to work together and solve this planet-destroying gravity anomaly. Or, uh, not.

The second episode of season four centers on the USS Discovery’s mission to—and into—the anomaly that destroyed Kwejian in the season premiere. From the first episode, viewers can deduce this “gravitational distortion” can travel faster-than-light (FTL) since Book’s homeworld is “light years away” from the Deep Space station that was hit by this thing. The first new info we learn is that this anomaly is five light-years across. That is just—holy hotcakes Batman—just so insanely huge that it’s hard to fathom. The closest star system to ours is the trinary Alpha Centauri system, which is 4.4 light-years away. This anomaly could occupy the same space as the Sol and Alpha Centauri systems. It’s totally bonkers.

Commander Paul Stamets presents this info at the Federation Base to the Starfleet and non-Federation members who have been invited.1 They lay out their hypothesis2, and their mission to collect data to create an advance warning system. T’Rina, the president of Ni’Var (the planet formerly known as Vulcan) is quick to offer the assistance of the Vulcan Ni’Var Science Institute—even though her planet is still not a part of the Federation. She also warns “civil unrest” may be stirred up (a hint at a future episode?). Mr. Saru picks up on this earnest cooperation to make a point for everyone to be a part of a “unified strategy”, which Federation President Rillak eats up and paraphrases for her own political rhetoric. Everyone appears to agree, and that’s all the political drama we get in this episode. 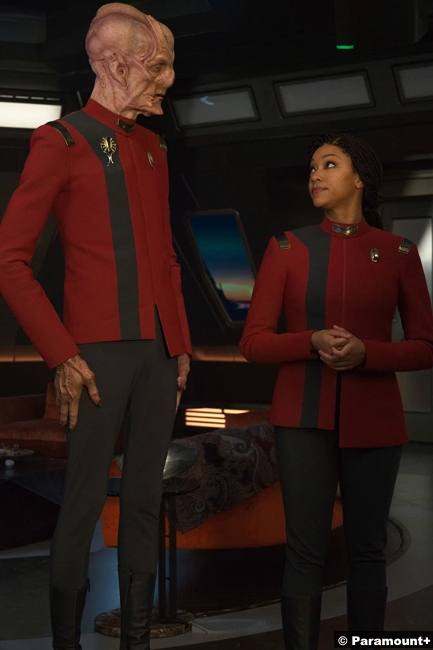 The main action of this episode is Discovery’s mission to the anomaly, and more especially Book’s role in the data gathering. The gravitational thingamabob is shrouded in debris, and only Book’s ship can make the trip. Of course, Captain Burnham doesn’t want her boyfriend out there, yes for personal reasons but also because the man is clearly suffering from trauma. After arguing with Book and consulting with Saru, Burnham decides to send a holo-copy of Stamets with Book and keep Dr. Culber on the bridge to assess Book’s fitness for duty. For all the emotional turmoil involved, I commend the writers for answering (in my opinion, misplaced) fan ire about Burnham’s captaincy that puts her strengths forward.

Burnham’s safety precautions include an energy tether to Book’s ship, to pull him back if need be. This is a transparent analogy to the emotional tether to Burnham that Book refuses earlier in the episode. So when the Discovery’s bridge goes up in spectacular pyrotechnics from gravitational waves, and they need to cut the tether and get some distance, well, it’s not a surprise, to say the least.

And then all their presuppositions about this phenomenon are pulled away, and they basically learn nothing new. The anomaly is not a naturally explicable object, and it can change directions at will. Maybe the trove of data the Book and holo-Stamets gathered will provide more intel in future episodes, but this episode advances the mystery by one step forward and two steps back.

While the mystery and mission itself aren’t the most exciting for Star Trek: Discovery (don’t get me wrong, there is plenty of action), this episode does a lot with this new and fancy 32nd-century technology. Now, a holodeck can be projected in a normal room, as we see in this episode how the Captain’s Ready Room transforms into Ni’Var. Gray Tal has created his synthetic android projection, a technology first used in TNG’s “The Offspring”3, which is explained to still have a high risk of failure. Finally, the main series gives a shout-out to “Calypso”—the Short Trek written by Pultizer-winner Michael Chabon—as we learn the Discovery’s AI has named itself Zora. There’s the aforementioned energy tether, the grav plates give out on the Discovery, the sphere of silence, and possibly the coolest bit: using programmable matter to simulate the grav waves to save Book from the anomaly.

David Ajala’s performance as Book is the core of this episode. He has lost his planet, his brother and his nephew less than half a year after he made amends. One of the strengths of this show from the start has been its treatment of psychological trauma, and David Ajala’s Book has no small amount of to cope with in this episode. In the first half, whether it’s his silent suffering and pushing away others, or this self-destructive newfound determination to set things right, the actor makes it easy to support Book’s actions. When PTSD strikes Book mid-flight with flashbacks of his nephew, his resignation to defeat feels natural even if it’s the last thing the viewer wants for the character. He comes around to understand that even if he isn’t Starfleet, he can accept Burnham and Discovery’s outreaching hand. 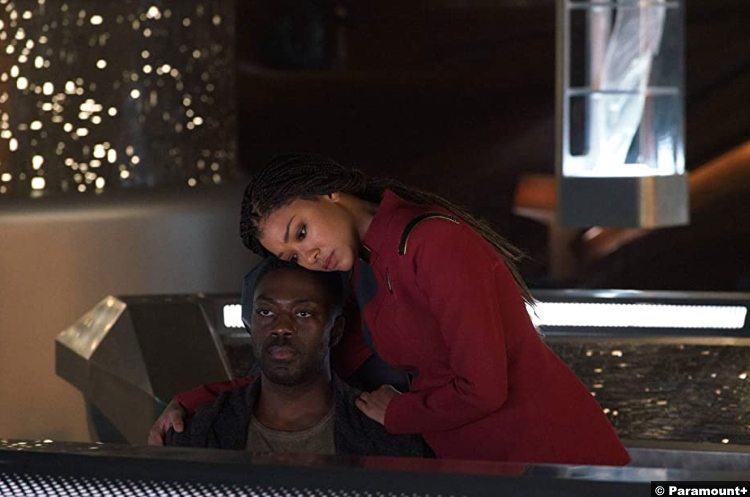 Of course this episode, like most television, lacks tension because we know the main cast members aren’t going to die in the second episode of a new season. But c’mon, it is pretty cool that they turn Book into the Silver Surfer to escape, right?

6/10 – “Anomaly” doesn’t tell viewers much more than they ought to already know about the gravitational distortion “anomaly” from episode one. Its saving grace is a spectacular performance by David Ajala, and how the writers incorporate 32nd century Star Trek tech in new and exciting ways.

1 I love how this meeting has several heads of state, and Book can just waltz in without an escort or any forewarning. Starfleet’s security has been lax since Kirk’s days… That said, it is a moving touch for all these important people to allow pause for a grieving person.

2 Though Stamets and Tilly don’t make any fuss over this thing traveling at FTL speeds, which was scene-breaking for me, considering they hypothesise that it’s a wandering binary black hole system.