As I wrote*, Bess’s uncharacteristic aggression toward Addy confounded me. I know she’s dealing with figuring out her place in the world, as well as the fear that her friends underestimate her. Still, though, it was startling to see her just be mean for the sake of it. I didn’t consider that she had other worries.

Those come to the forefront this week as Nancy and the rest of the Drew Crew finally get their hands on some hope in the form of the soul splitter. Bertram Bobbsey actually has an amazing storage unit, as it turns out, and I hope we get to see more of it. The Crew gets access to it only because it relates to Carson’s client Asher’s case. Carson is able to get an injunction dependent on an ex parte hearing. 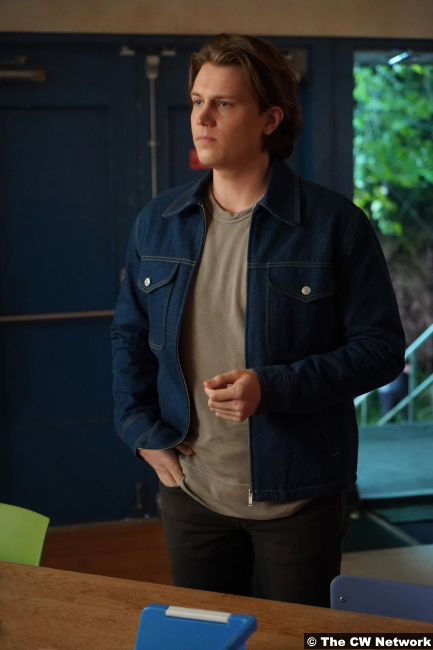 In the meantime, the police basically turn over custody of the unit to Carson. He and Ryan search the unit for the device. However, Ryan knocks over what I can only describe as a potion. It’s a brew that grants people the fearlessness of youth. And both he and Carson get a big whiff of it.

This is mostly hilarious. First, they shed their boring grown-up clothes for cooler gear that hints at the actors’ previous roles. (For instance, Carson dons a letterman’s jacket much like Scott Wolf’s character Bailey wore on Party of Five. Meanwhile, Ryan kits himself out in motocross wear, a sure nod to Riley Smith’s role in the film Motocrossed.)

They also immediately abandon their responsibilities. Ryan returns to his teenage adrenaline junkie self, with the aforementioned motorbike, and doing donuts in a parking lot. Carson, on the other hand, drops by DA Jean Rosario’s (Erica Cerra) house to confess a crush on her. Nancy, however, intercepts him before he can get too far. 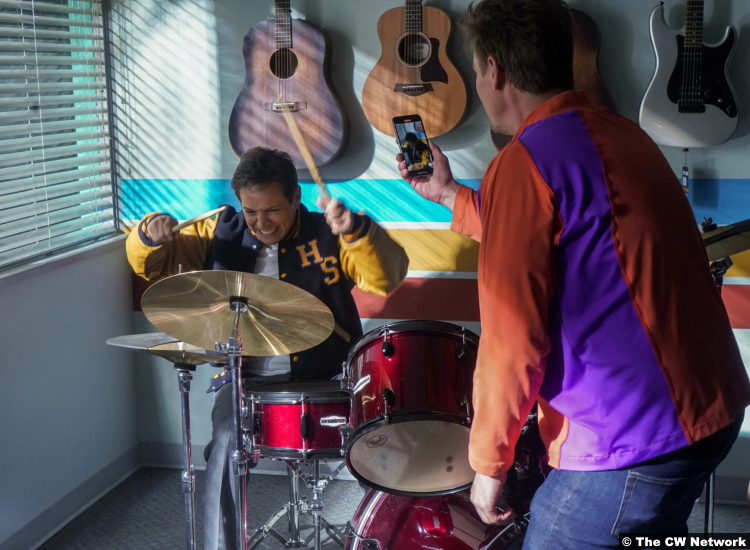 After that, it’s only a matter of retracing their steps, because, of course, they’ve lost the soul splitter. Fortunately, Nancy finds it while leaving Ace to babysit her dads. Somewhere in there, they remember that Carson has that hearing with the judge. He is floundering when Ryan barges in with his teenage confidence and takes over. He insists that they halt the search of the storage unit because there’s Hudson property in there. And I mean, yeah, there probably is. Anyway, it works.

With the soul splitter in hand, Bess can perform the ritual. Sadly, it doesn’t quite complete. They think maybe it’s because the ritual Bess is following is for the original soul splitter, not one of the knockoffs. What they find out, though, is that the device is actually for breaking a soul into pieces, not pulling two intertwined souls apart. There is a method for pulling off the latter move, but Bess will have to destroy the crystal that contains the parasitic soul.

And it’s here we see what has been troubling Bess. It’s the prospect of having to say goodbye to Odette forever. I’m trying to get it, I am, but…at the same time, I’m like, I guess. I know when you’re young, romantic loss can seem like the end of the world. I know–the 10-minute version of “All Too Well” is now my most listened to song for the past month and it just came out last week. Knowing that, though, I’m like, you’ll find other people. Also, this against George’s life? 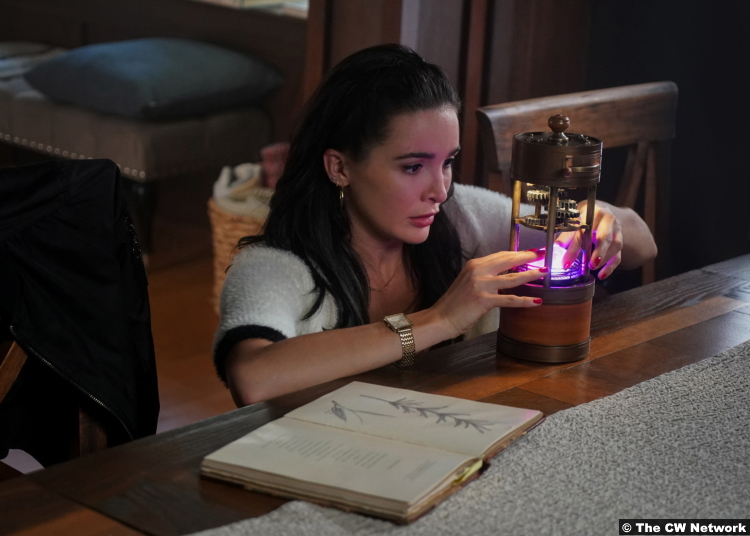 The choice seems obvious. But in case that wasn’t enough, there’s also what Nancy says. I mean, she says a lot of lovely, gutting things about loss, but she also says the bottom line. Odette is already dead. There is no future there, because she’s already past.

With that in mind, Bess makes the only choice she really can. She saves George and her soul. (Also, just thought of this, but it would be nice to let Odette rest.)

So that’s all over. Now George can go on to live a long life with Nick. Except, whoops, he’s missing now.

8/10 – If you look closely, then you’ll see that there actually isn’t a whole lot of plot in this episode. They paper over that, though, with the excellent “teen” dad scenes and Nancy’s talk with Bess. Finally, maybe Nick just ran out of the house and forgot his phone?

*I also wrote in that review that Addy was clearly Indigenous-coded and it turns out I’m right, as I usually am about these things. Anyway, while I’m glad they’re using her character to shine a light on some of the challenges of Native life, just once I’d like to see an Indigenous character who’s thriving. You know, outside of a Native story (like Reservation Dogs). Just a Native being regular on a regular show.