To find out more about what podcaster Laci McAllister (Bethany Brown) knows about the Frozen Hearts Killer, Nancy is making a trade. Laci has an interest in a Horseshoe Bay case from the 1950s. Joe Kelsey is the titular executed man, who confessed to murdering a night watchman. So Nancy is bringing her the police department’s case files.

In other words, she’s stealing them. But this is basically as cold as a case gets, so I don’t think they’ll kick up too much of a fuss over it. Anyway, despite the fact that Nancy already has a case, she absolutely cannot resist a mystery. So of course, she opens the box.

And I will admit, it is an intriguing case. The police didn’t seem to have much evidence against Joe, but he confessed, anyway. An unnamed coworker tried to fight for his defense, but it was in vain. Again, Joe was like, yep, I did it. At this point in the episode, I was getting Joe Hill vibes. 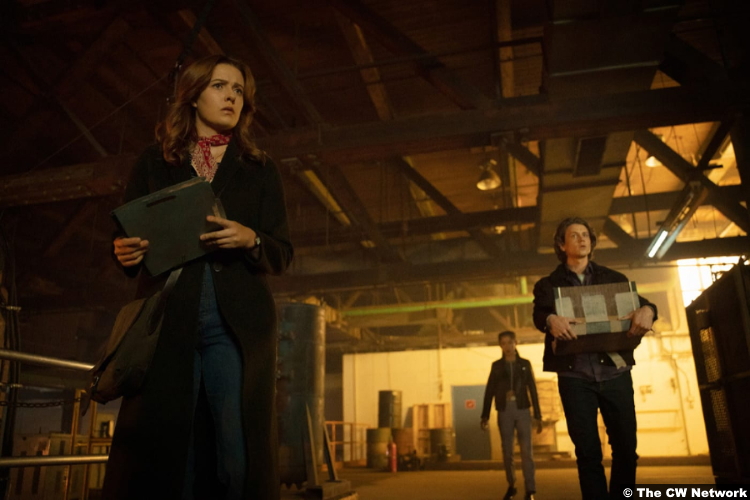 Nancy is examining all this stuff, by the way, while she’s in the car with Ace and George, on their way to the Detective Con. As they’re driving, though, Ace’s car, Florence, starts flipping out. It seems like an electrical issue, so Ace pulls over next to an abandoned factory. Hey, what are the chances that this is the same factory where Joe supposedly committed that murder? I would say they’re pretty good, since his ghost shows up and yells at them in Yiddish.

So Nancy decides to go up to the factory to see if she can get better cell service. George and Ace are like, do we ever get a choice in visiting these creepy murder dens? Nope. Anyway, speaking of creepy, the door immediately closes behind them and Joe’s stuff scatters everywhere.

It seems clear that his ghost is trying to lead them somewhere, tell them something. He even goes to the trouble of recreating the murder, hollering, “Nachtmensch!” Ace translates it as “night man” and the gals are like, we didn’t know you knew Yiddish. Well, I don’t, either, but it’s the same in German.

While he’s going to all this trouble, though, Nancy realizes that he couldn’t be the killer. He has the wrong dominant hand. And sure, he could have used his non-dominant hand, but people don’t generally think to do that. Most criminals are not actually masterminds. 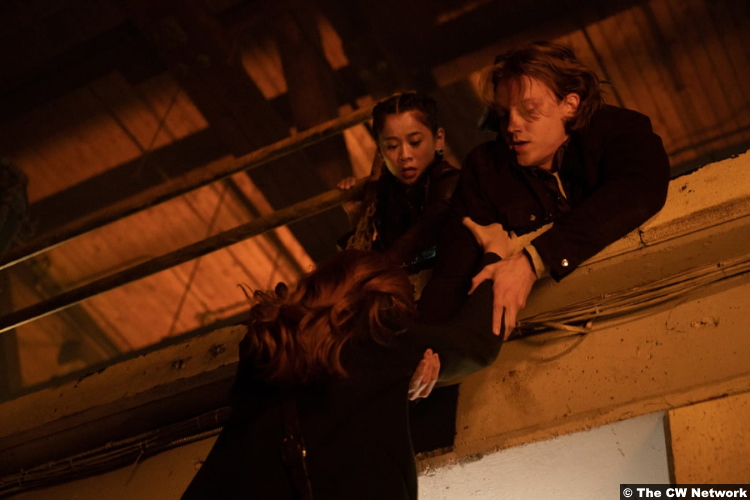 In any case, however, Nancy picks up what Joe is putting down. It doesn’t matter if the facts fit or not. Joe absolutely doesn’t want anyone looking into his case. For some reason, it’s very important that he remain the convicted killer.

He’s going to keep doing poltergeist-y shenanigans, though, if they don’t burn his stuff. So they do, but Ace keeps a matchbook. It’s understandable–he sees his own Holocaust survivor grandpa in Joe, also a survivor. But it’s a very bad idea. Ace, now possessed, spends the bulk of the convention feeling like death and mumbling in Yiddish.

Meanwhile, Nick and Bess have been left behind. Nick’s trying to set up his youth center and Bess is just being rude for no reason. Like, seriously–why is she so aggressive with Addy, the date she ditched? Also, seeing a British person be so nasty to someone who’s clearly coded as Indigenous doesn’t sit right with me. It just all feels very weird, but it’s just set-up for a legit enemies to lovers coffee shop au. I am dying.

Anyway, the rest of the Crew calls them for help from the factory. They’re all out by the time Bess and Nick get going, so they just all meet up at the con. Since Nancy quickly figures out, with help from Laci, that the Frozen Hearts Killer is at the convention, we do need all hands on deck.

It turns out to be pretty easy to catch the guy. Nancy does a panel with Laci, which is just an excuse for Nancy to call the FHK a lily-livered ineffectual ding-dong. I mean, she used other words, but that’s basically the gist. Then Nancy walks into a secluded storeroom to wait for this dummy to follow her in there.

He does, obviously. Again, pretty easy. Suspiciously easy. Maybe that’s why he tells her that she doesn’t understand what’s going on. Aw, man, is he part of The Road Back, too?

Just before they leave, Laci’s grandma catches sight of the matchbook, when Ace drops it. It’s from a motel, which she recognizes, because she’d meet Joe there. That’s where he was during the murder and why he was so adamant about sticking to his story. Their (interracial) relationship was illegal, and Laci’s grandmother would have borne the brunt of any backlash. He was protecting her (also the coworker who tried to fight for him) the whole time.

So she lights the matches and a younger Joe ghost appears–previously, he’d had the appearance he did at execution. But not now. Now he’s free.

8/10 – I didn’t get to mention it, but I love the reveal that George’s sister Ted (Ariah Lee) has been writing fanfic about great detective George Fan (and her sidekick Nancy Drew). It was a fun meta moment during an episode that was pretty meta in itself, as “actual” great detective Nancy attended a mystery convention. The Frozen Hearts Killer case resolution seemed abrupt, as I said, but it’s clear they have bigger plans.