Over the years on Riverdale, there have been a lot of wild moments. There’s also been a lot of humor, intentional or not. However, it’s hard to think of a moment that’s tickled me recently as much as Penelope announcing that Jason’s ghost bans musical numbers. Me too, bro.

Of course, this comes up because Cheryl and Kevin have turned the ministry into a performance space for themselves. Obviously, it was kind of already that sort of thing, but now it has more singing. And as I said last week, no music, please. 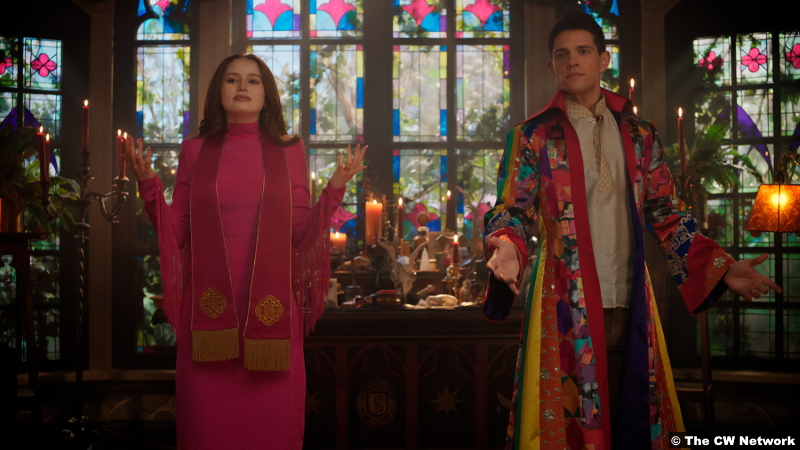 It’s also obvious that Penelope’s gearing up to take back her church, because what good is a made-up religion grift if you lose control of it? So in order to prevent that from happening, Kevin suggests that Cheryl put herself in line for sainthood by performing a trio of miracles. And I gotta say, hate the singing–I cannot emphasize that enough–but I will always lean in to a classic bonkers Riverdale plotline.

Anyway, speaking of classic, that’s how the miracles start out, with a classic water transformation. Instead of wine, though, it’s turned into maple syrup. Yes, keep it coming! Then Cheryl displays stigmata, in keeping with Jason’s “holy wounds.” Uh, wasn’t he shot in the head? It’s been…many minutes since the reveal, but I’m pretty sure that’s what happened.

She’s using simple magic tricks for all this, by the way. For the third miracle, though, she draws on Nana Rose’s expertise with apiaries and sticks her hands in a container of bees. Even when removed from the container, though, the bees cause her no harm. (Note: I’m not sure if this is a direct reference to a particular saint. I’m not of a religion that recognizes saints. Maybe Ambrose, though? Anyway, this reminded me more of the snake-handlers I grew up around than anything else.)

The end result is that Cheryl wrests back control of the “church,” but she also calls herself “queen of the bees,” and thinks that something inside her has “shifted.” It’s never a good sign when Cheryl goes full-Cheryl–that’s how we get her sending pig’s hearts to people or keeping her brother’s decaying corpse in the house. But I’m sure it’ll be fine this time.

In other news, you might have expected me to have spent more time talking about Archie’s plotline, since the episode title is a military (show) reference, after all. But for all that, his storyline was brief, as well as indicative of the cheap approach they’ve taken to The War. They’ve been somewhat unbad at depicting the struggles returning veterans face, so this week’s story is just disheartening. It feels rushed and weightless, because it is. I mean, Archie is in only one of the official promo images for this episode. 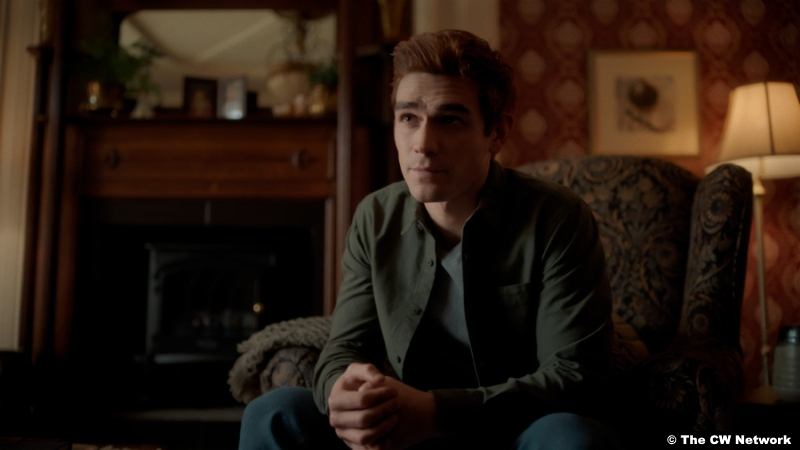 Anyway, Archie finds out that the commander who sent him and his men into danger is now going to retire with full honors. (The mocked-up cover of The Brave and the True, an analogue for the real-life military paper Stars and Stripes, was a particularly great touch.) Archie talks to the family members of his late platoon and gets no clear consensus on what they want him to do. But then he and Jackson testify at a tribunal, which we don’t see, and the general is dishonorably discharged. Okay, great, I guess.

Meanwhile, Jughead, having lost his novel–because Betty just handed it over to whatsherface*–first tries plagiarism, by giving his agent that novel that girl gave him that one time. (You remember.) Then he cops to it, loses his agent, goes off the wagon for a day or so, and gets back on. That’s what you gotta do. The show seems to be angling toward a Bughead recoupling, but I don’t know how that will happen when Betty will not stop trolling the highway for more killers.

In an effort to feel less distressed about that, I will instead concentrate on Veronica’s storyline, which for once, is not completely tedious to me. That’s because we find out that that manbaby she’s unfortunately still married to called the SEC, and not the fun one. (Note for non-Americans: He called the Securities and Exchange Commission, the government agency that, in a nutshell, regulates the stock market. The fun one is the Southeastern Conference, an athletic conference that’s home to several teams, including my favorite, the University of Alabama. Roll tide.) 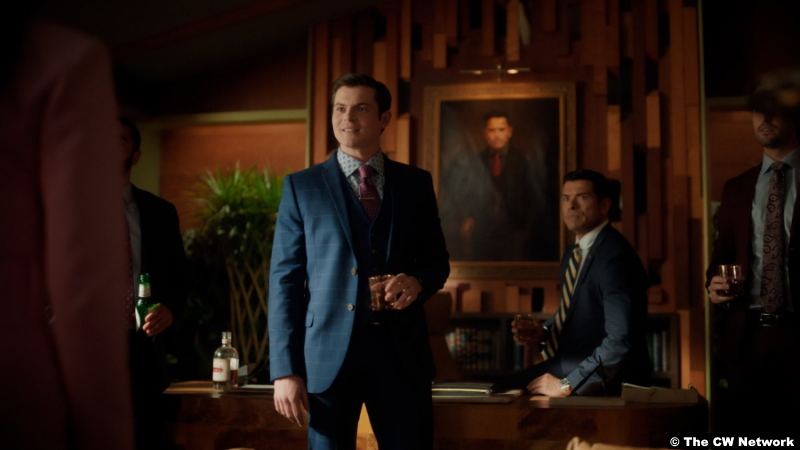 Basically, she has to raise a lot of money quickly to pay off their investors so their accounting looks and is legal. So she steals the palladium from her dad’s safe, has it smelted into replica doubloons, and then auctions it off for $300k. You know, that old story. She’s able to make the investors whole, and then as a treat, she capsizes Chad’s new business. Can we divorce this dork now?

8/10 – As I said, the military storyline was handled poorly, but Cheryl’s new, new descent–ascent?–into a bananas plotline makes up for it. And I’m glad to see Veronica put both Hiram and Chad in their places.

*I’m being told her name is Jessica, but every time they try to tell me this, I just turn my head away like a dog when you try to give it food it doesn’t want.