Riverdale S05E15 Review: Return of the Pussycats – I tolerated the music

Once I realized that we’d be jumping forward way past high school, I have to admit that one of the reasons why it tickled me was the realization that I’d never have to watch another high school musical episode. As I’ve mentioned before, I don’t exactly love those. (Nothing against them; I just wasn’t raised like that. Case in point: We saw the Dear Evan Hansen trailer this week before Shang-Chi and my sister visibly recoiled.)

So of course, this show found a way to sneak in a musical episode. How? Well, the title should be your first clue. But it’s kind of a fuzzy one. After making what seemed like a real effort at first to make Josie and the Pussycats–Melody and Valerie–part of the storyline, they too fell victim to one of Riverdale‘s biggest issues. By that, I mean the sidelining of characters who are not the core four. 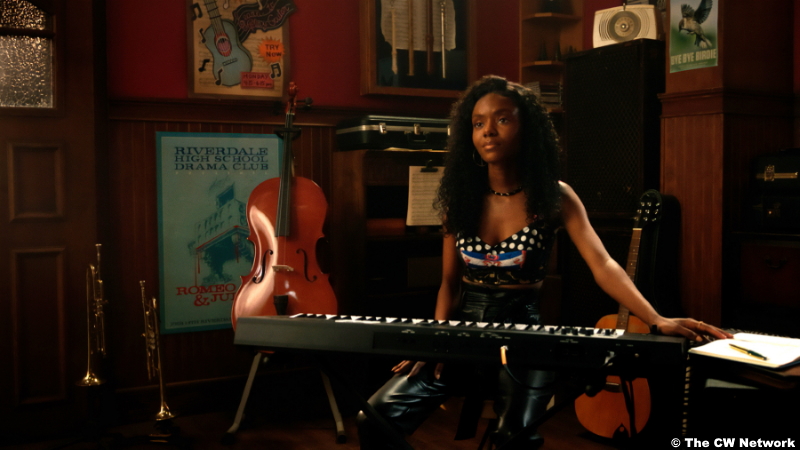 Because of that, I had to remember how/why the Pussycats left. Basically, it was Josie. She decided that she was going to be a big solo star and Melody and Valerie were kind of left in her wake. And that’s pretty much where we find them all, seven years later.

Josie is a huge star, although she’s now the subject of a lot of media speculation. After failing to show at a gig in Berlin, she’s gone off the grid. Meanwhile, Melody and Valerie still live in Riverdale. Actually, they live together as roommates–that’s sweet. Valerie is an artist and aspiring actress, while Melody is a pretty successful YA author.

In fact, Tyler Perry wants to option her hit novel. Melody is kind of torn about it, though. She knows it’s a huge opportunity, but everybody expects that Valerie will star in it. However, Tyler Perry–I’m sorry, I can only address him by his full name–wants a big-name actress. That doesn’t really sound like his MO, but okay.

And that’s what’s going on when Josie turns back up in Riverdale. Everyone’s thrilled to see her, although the Pussycats are still a little standoffish. That’s understandable, especially after how they parted ways.

For her part, Josie has changed quite a bit. She’s way more confident, which is kind of a double-edged sword. It’s good in some respects, because she’s able to call out her former classmates in a meta moment.

They assume that she’ll just fall all over herself to help them save the town, but she’s like, you barely paid attention to me before I was famous (and thus, valuable to their cause). On the other hand, it also makes her kind of prickly in general. I like watching her dismiss Hiram, though.

Gradually, the truth comes out. Josie had been just about to take the stage in Berlin when she found out about her father’s passing. He and his career had been an inspiration for her in so many ways. She’d spent her life watching him play second fiddle to bigger musicians, so that’s why she spent so much effort striving to be the biggest.

At the same time, given his career of playing backup, Valerie and Melody expected Josie to have more respect for them, her backup. They come at her pretty hard, but it’s not unfair. It’s what needed to be said. And once they find out about her dad, they soften. They’re all in on playing with her again, as she’s asked them to.

So she and the Pussycats agree to a one-night-only benefit concert for Riverdale. But that’s not the first time we hear music in this episode. In fact, it’s been happening this whole time. My aversion to musicals just neatly skirted around it. 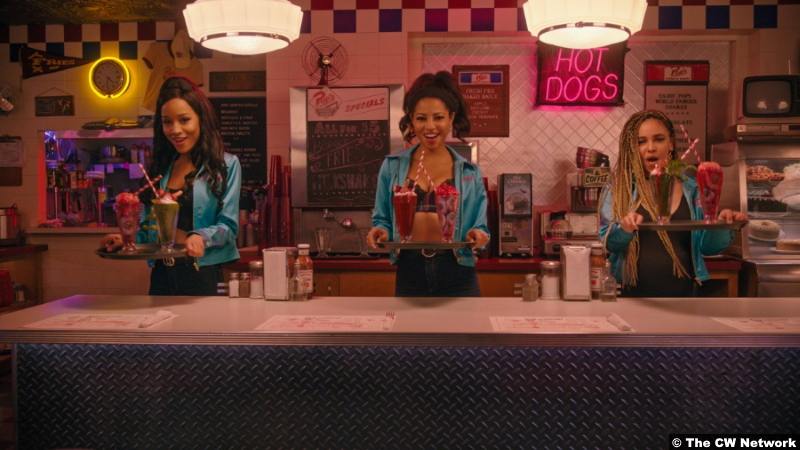 It plays in tandem, in fact, with Veronica’s storyline. Alexandra “Xandra” Cabot (Camille Hyde) has come to town to see about recouping her money, which she’d invested with Chad. (Xandra first appeared on Katy Keene, by the way, which I never saw.) Veronica sees an opportunity, of course, and pitches her on investing in franchising Pop’s.

At first, it’s a rocky proposition. They make me sit through a performance of “Little Shop of Horrors,” I mean. Also, Xandra wants to cut costs by having the franchisees make milkshakes with instant milk. Gross. Ma’am, it’s called Pop’s Chock’lit Shoppe because the milkshakes are the main attraction. It kind of reminds me of Twin Peaks, when Norma’s flagship diner wasn’t doing as well because she used high-quality and costly ingredients for her pies. Hey, that show also had a Chad who sucks. 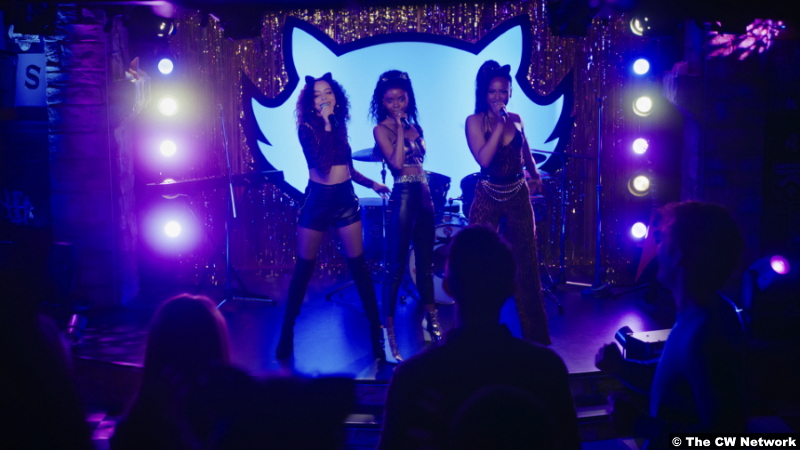 Anyway, it all works out because Xandra is apparently so inspired by the Josie & The Pussycats performance that she decides to go ahead with the deal. As for the band, they’re heading off on tour together and maybe a spin-off–a guy shows up just as they’re leaving to tell Josie he thinks her dad was murdered. I would watch a Pussycats solve mysteries show, by the way.

Speaking of me, I am just thrilled that the singing is over. And that I got to see a casual Dr. Curdle, Jr. make an appearance at the show. Love that weirdo. Oh, and Toni returned! And had her baby! It’s a boy and she named him Anthony.

8/10 – While, again, I tolerated the music, I thought this was a pretty good start to making it up to characters like Josie, Melody, and Valerie, who were used more as set dressing in the “old days” of the series.

Also, if you haven’t seen the Josie and the Pussycats movie, then you really should.