I mean, I guess. That’s basically the only coherent thought I had at the end of the episode–well, that interspersed with “What?” and “Huh?” Also, “Did I miss something?” Not a lot of this episode makes sense to me, or at least, not the conclusions to which it leads. But I’ll just report the facts.

Now last week, if you’ll recall, we ended with a(nother) cliffhanger. Kyle was missing and Maria was passed out on the floor. This week, Kyle is still missing, and Maria is in a coma. That seems like a dramatic result for the relatively mild injury she has, but then they remind us of the whole degenerative brain issue she’s having. Or they remind me–look, I watch a lot of things and I have to juggle a lot of plotlines in my ADHD head. 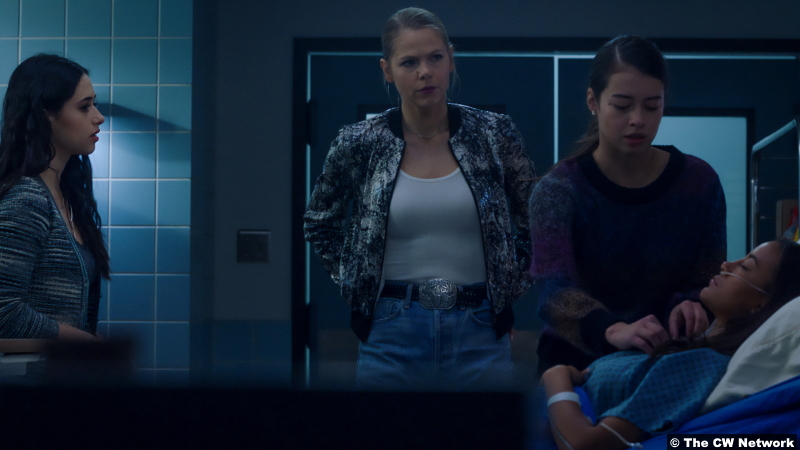 Anyway, Isobel is trying to travel through Maria’s mind to find out what happened, especially if there are any details relevant to Kyle’s whereabouts. Unfortunately, every time she tries, it’s like Maria’s mind throws her out. So the next logical solution, while Isobel keeps trying, is to figure out what Max saw.

Because as it turns out, he saw quite a bit. He says that he saw a flash of light off in the desert, a detail he withholds from his boss, Sheriff Taylor (Gillian Vigman). She was the one who found him when he came to, as he says he was also attacked by an intruder in an alien mask. Further, he had buried Jones’s alien sword outside his house, and it’s now missing. There is a bloody shovel next to the hole, so Liz takes samples of the blood for analysis. 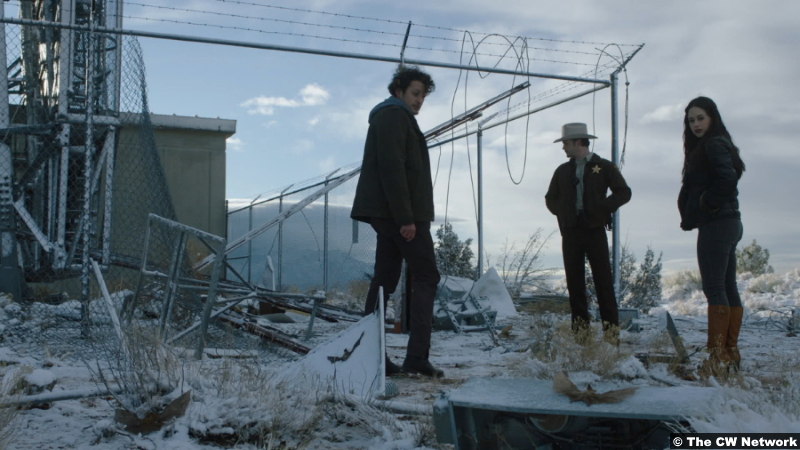 When Michael investigates what could have caused the flash, he finds a radio tower ringed by dead bats and the shattered pieces of Kyle’s father’s radio. It’s a puzzle he can’t solve until Sanders points out that only vampire bats were affected. As they hunt using infrared, which only travels in one direction, Michael can use science magic to figure out where the signal originated. (Please do not ask me to explain further.)

Speaking of, bats also hits the windows at the Deep Sky headquarters. When Director Ramos (David DeSantos) returns from checking it out, he has a bandage on his arm. He tells Alex that it’s just a precautionary rabies vaccine. Uh-huh. That’s where they usually give vaccines–right in the wrist. (As that link explains, like many–most?–vaccines, adults get it in the upper arm.)

This doesn’t seem to make Alex suspicious. However, he does become troubled after Michael asks him for help, explaining what’s going on. And especially after Michael mentions the bloody shovel. Since Liz can’t get an analysis–the hospital machine is slow, then Max blows it up when he tries to help–Alex takes it for analysis at Deep Sky. It shows a familial match to Kyle’s own sample.

A search of Ramos’s office reveals that he has his own old-timey radio. He finds Alex in there, though, and here is where the episode starts to get really confusing to me. Not the part where Alex decides that Ramos is Kyle’s uncle, because, sure. This is a show about aliens–I can buy long-lost relatives. But the part where Alex says that Ramos has ties to terrorists? Say what now? Anyway, Ramos holds Alex at gunpoint for (terrorist?) reasons.

Isobel realizes somehow that Rosa can help her explore Maria’s mind. It’s a little shaky at first, but then they find the memory that Maria tucked away for them. It’s what happened after the alien mask person knocked her down. Contrary to what Max told everyone, Maria was conscious when he found her.

She found Kyle in respiratory distress, so she gave him adrenaline. Then came alien mask or whomever. Kyle turned on the radio, which shot out the door (on its magic carpet ride to the radio tower). Then Kyle disappeared.

The huge gap between this story and what Max said leads Rosa and Isobel to conclude that Max was lying for some reason. At the same time, Liz is also putting together pieces of Max’s strange behavior and comes to the same conclusion. For instance, there’s an alien handprint on Maria’s forehead, but Max says it might have happened when he put a pillow under her head. Uh, how hard did you put her on that pillow?

Once Liz reconvenes with her sister and Isobel, they come to the same conclusion: It isn’t Max. It’s been Jones the whole time. And as he tracks down the two randos who stole his sword, all I can say is, excuse me, what?

7/10 – While this was an entertaining episode, I have no idea how any of it happened. How is it Jones? He was in the pod. Did they somehow mix them up when they were putting one of them in it? Or can Jones just walk out of the pods? These are not rhetorical questions, by the way–someone please explain it to me like I’m five.