If you’ll recall, we ended the last episode with Max finding Kyle, who’s gone and gotten himself impaled. Kyle is conscious enough to protest when Max tries to remove the metal bar, so I’m not sure why Max couldn’t just call the paramedics. Anyway, Kyle is human like me (allegedly), so he’s protesting because removing an impaled object is usually a bad idea. (That’s because a lot of the time, the object is what’s keeping all the blood in.) 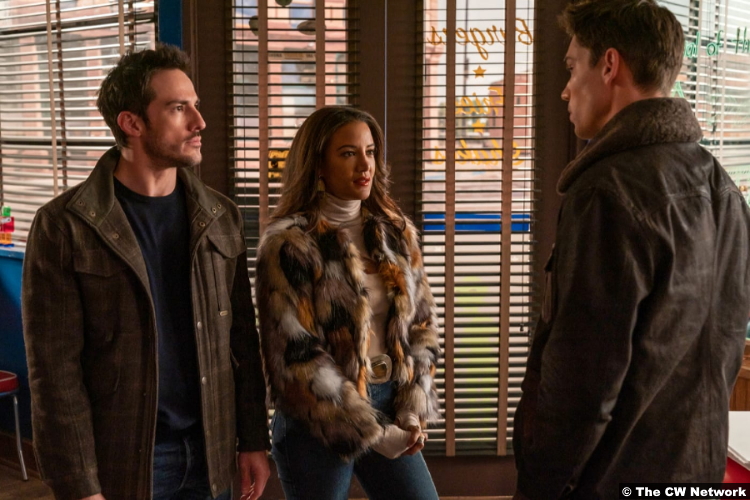 Of course, Max is not a human, so he removes the bar because he’s planning on healing Kyle himself. As we all know, Max is also in late-stage heart failure, so this sounds like a terrible idea. Surprisingly, though, it goes well. He heals Kyle, and there are seemingly no ill effects for Max, either.

Uh, yeah, about that. It appears that healing Liz that one time created a kind of parasitic reaction with her. Yes, it’s very cool when she can feel his emotions. It’s less cool, though, when his body leeches strength from hers. That’s why her handprint lit up, and also why we find her this week, having just had a heart attack.

Heath, who should have really heeded my warnings*, drives her to Roswell at her request. Max, feeling very peppy, tries to heal her, too, but guess what? Now his body’s trying to steal health from Kyle. Maybe Max could just heal a terrible person and then use their renewed vitality to heal Liz and Kyle.

Where on earth would I get an idea like that? Well, let me tell y’all. Remember when the gang of alien mask-wearing guys attacked Maria and no one kicked up a big fuss about it? It turns out that they’re actually a militia. One of them, Zeke, turns up dead on the Lopez’s farm this week. And I mean real dead, like burnt to a crisp.

This threatens to ignite the tensions in the already tense town. There’s a protest going on outside the sheriff’s office and the “alien” militia, the Roswell Regiment, roughs up Arturo. When someone hurls a brick through the sheriff’s office window–convenient–the new sheriff calls in the Regiment. Great. 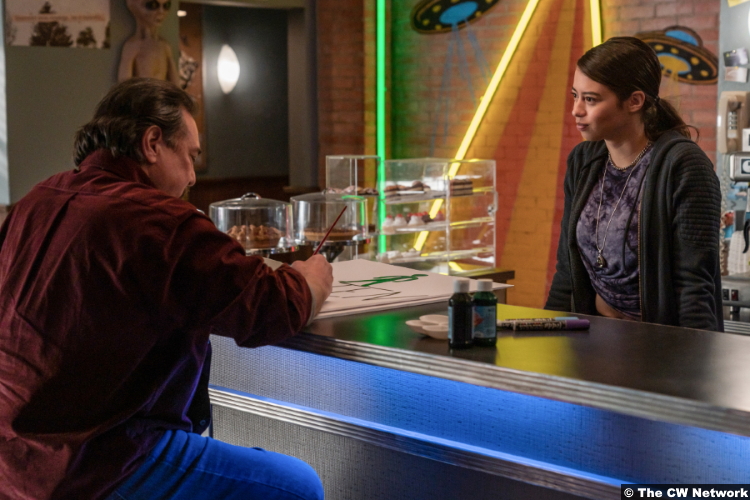 None of our friends believe that the Lopezes had anything to do with Zeke’s death. They also don’t want the Regiment in any position of authority. They manage to take care of both problems with a foolhardy solution. It’s great that they pull it off, but it’s really dangerous.

That’s because it involves Rosa and Maria sneaking around the (Lopez’s?) barn, where the Regiment is meeting. The Regiment discovers them and holds them at gunpoint, which is where Jordan confesses to moving Zeke’s body onto the farm. He didn’t kill him, but he found the body and found it politically convenient to blame it on the Lopezes.

Also convenient? Anatsa (Sibongile Mlambo) catching that confession on a livestream. Just how loud was Jordan? Anyway, it doesn’t matter, because he’s arrested for…tampering with the body, I guess.

Again, he didn’t kill Zeke. Because last week, when I said that Jones’s day out felt like a muted storyline, there was a reason for that. He didn’t just make a doggy friend and commit a HIPAA violation. He also killed Zeke. Apparently, to heal people, Jones has to gather strength by unhealing people really hard. Really raises a lot of questions about his past life on the other planet, huh? 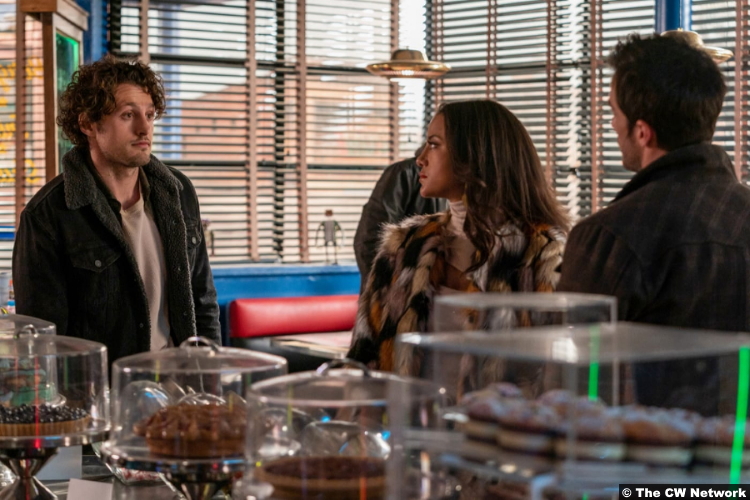 Nevermind, we’re moving on. Having refused Jones’s offer to heal him for what now seems like plot reasons, Max finally acquiesces. I don’t see what the big deal was, because now he doesn’t have a failing heart. Liz and Kyle are fine, and Jones was put safely into a pod. Everything’s great!

Oh, wait–no, it isn’t. As the ash is still falling, Maria realizes that it’s not all over. Kyle could still be murdered. And when she tries to call him, it just goes to voicemail. Maria, always proactive, has him on Find My Friends or the like, and pinpoints his location at Max’s house.

Unfortunately, just after Kyle lets himself into Max’s house, we see a figure in the hallway. An alien mask-wearing figure. And double unfortunately, Max comes home to a frightening scene. There’s clearly been a struggle, and Maria is bloody and (hopefully just) unconscious on the floor. But where is Kyle?

7/10 – While I generally liked this episode, it also felt a lot like last week’s episode, complete with Kyle cliffhanger.

*Two things I didn’t get to mention: Liz hurting Heath, just as I predicted. That sucked. And then a thing that didn’t suck–Michael finally acknowledging to Rosa how short-sighted it was to put her in the driver’s seat the night she died.