REVIEW: Pacific Rim Uprising fails to do its one job

2013’s Pacific Rim was a big budget “giant monsters vs giant robots” movie that had just enough plot to string together the stuff you came to see: giant monsters vs giant robots. It was loud, cheesy, audacious, and above all fun. It pulled in only 100mm in the North American box office, but was one of the first “saved by China” movies as that particular market contributed a third of its 300mm international box office haul. Critics were kind to it, praising its effects, scale, and sense of fun. It looked like a sequel would be greenlit, if only because the potential for turning into an exponentially-growing franchise was obvious. 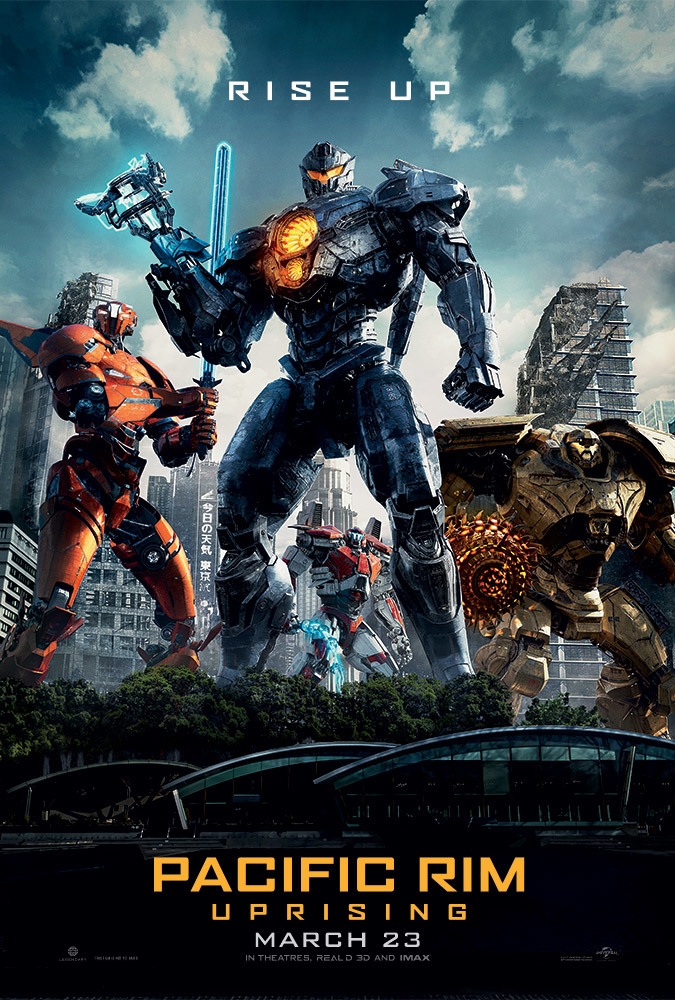 Guillermo del Toro directed the film, his first since 2008’s Hellboy 2. It would be two years before his next film (where many Hollywood directors release one film a year, and sometimes one every nine months)…but it wasn’t Pacific Rim 2. Del Toro is infamous for having a million projects juggling in the air, while also taking a long time to make…anything.

Pacific Rim was his biggest hit to date and despite talking about his big plans for the sequel (saying he wanted to take the “franchise” in a logical but exciting direction), the years rolled on and still…nothing. Soon after Crimson Peak released, it was announced work had begun on Pacific Rim 2 but less than a year later, Del Toro announced he was leaving the film to work on a passion project. That project would become the Best Picture winner of the 2018 Oscars, The Shape of Water, which also scored Del Toro his first Best Director win.

So it’s safe to say he made the right choice.

With him out, the upstart franchise turned to Steven S. DeKnight (famous for TV work such as Smallville, Buffy and season two of Netflix’s DareDevil). He’s making his directorial debut and co-wrote the screenplay. I don’t know if it’s right to say “there’s a lot riding on this” since, after five years, a change in studios, a March release, and a budget even smaller than the first, it doesn’t seem like too many people are counting on this to pay the bills. It just needs to be a solid movie, fun like the first, not over-thinking things and with action set-pieces that wow. 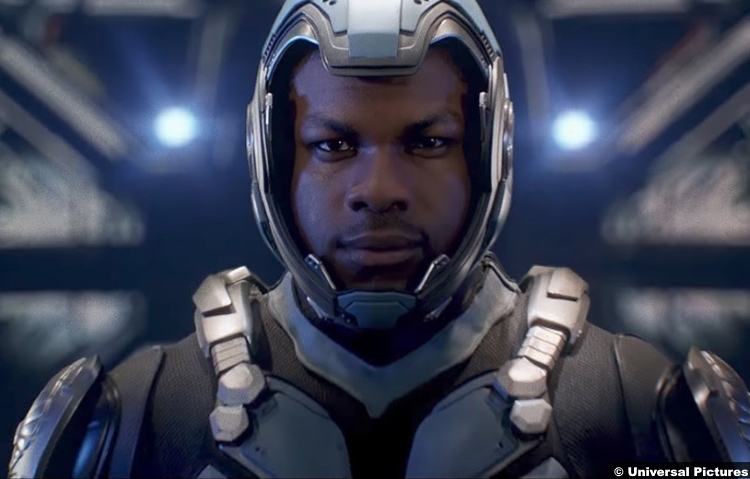 Pacific Rim Uprising looks, sounds and feels like a sketch-show parody of Pacific Rim and most of the blame has to fall on the writer/director, since most of the problem lies with the script and the flow of the action. In movies like this you don’t need a big fancy screenplay. There’s a reason the saying “it doesn’t have to be Shakespeare” exists; not every movie needs to be Citizen Kane, and in a film like this it’s almost preferred. And yet this movie tries really hard to spend a lot of time telling you a bunch of things, and none of it works. You don’t care about any of it, because the acting is so stiff and blunt and obvious, and yet it just. keeps. coming. 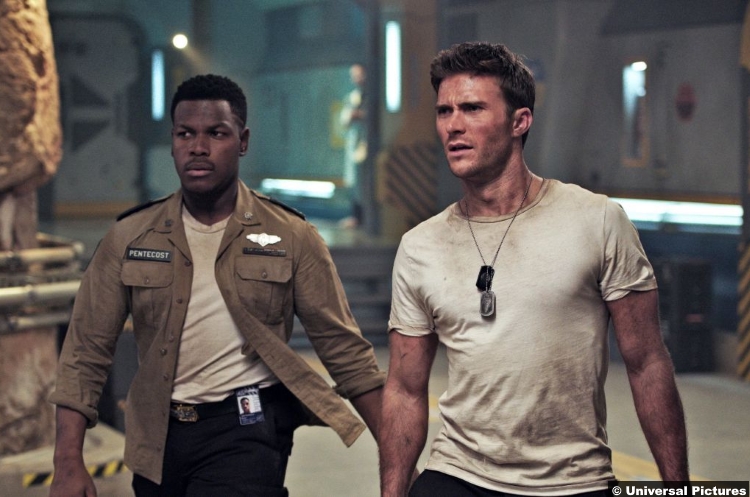 The movie grinds to a halt on numerous occasions just to advance a plot that you wish would just disappear behind the giant monsters and giant robots. It’s also painfully obvious that there was at least an extra hour’s worth of plot that went to the cutting-room floor, as the film has a terrible “choppy” feel to it, rushing from plot point to plot point with connective tissue as flimsy as dental floss.  Why does there need to be a three hour cut of this movie, with two and a half of those hours devoted to people talking? No one bought a ticket to see people talking in this.

So what about when said monsters and robots are engaged in city-wide brawls? 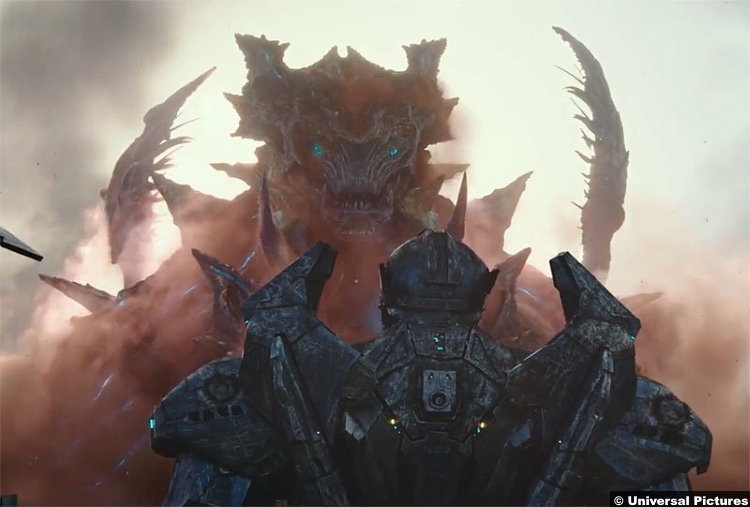 What happens is a camera that half the time is too zoomed-in tight on the big guys that any sense of scale is ruined. They might as well be ants fighting flies. Once you get in so close it doesn’t matter. The other half of the time, the camera is ground-level (which is a good trick to show scale) and focused on the actors looking up past the camera doing bad version of The Spielberg Face. I think the thought-process was: “We need to see the people, their faces, their reactions, so get in close and show it!” Except…who cares about the people? If you want me to care about the people then the screenplay has to make me care about the people. Otherwise leave the people on back-burner and just zoom out so I can see that the monsters and robots are the size of sky-scrapers.

But again: You don’t need the tight and polished screenplay; you don’t need to make me care about the people on any more than a surface level. You just need a serviceable script that gets me from point A (giant monster fight) to point B (even more giant monster fight). But Pacific Rim Uprising tries to have “no cake and not eat it too.” For some reason it wants a bad screenplay that puts a lot of focus on the actors.

That’s not the way these movies are supposed to go.

So no: We don’t Citizen Kane. We need Pacific Rim (the first one): characters developed just enough to make us tolerate the scenes when giant things aren’t fighting other giant things.

Uprising lacks that, and for that reason above all it fails.

4/10 – The downtime is boring, the action is—after the first giant fight—a series of increasingly less-interesting set pieces. And when your movie butters its bread on its action set pieces, that’s a killer.