New from HBO this week is this limited series. I know the title seems cryptic, but if you can believe it, the show is about a woman, Mare (Kate Winslet), who lives in Easttown.

That’s Easttown, Pennsylvania, by the way, and it’s certainly seen better days. But so has Mare. She’s a police detective, but once, as the title of this episode says, she was “Miss Lady Hawk herself,” champion basketball player. Now she just seems tired all the time. She snaps at people a lot. She’s got a lot of stress at home, what with taking care of a teenage daughter, Siobhan (Angourie Rice), and a young grandson, Drew (Izzy King), the son of a son who’s no longer with us. Money is also an issue–Mare carries a phone with a shattered screen, for instance. 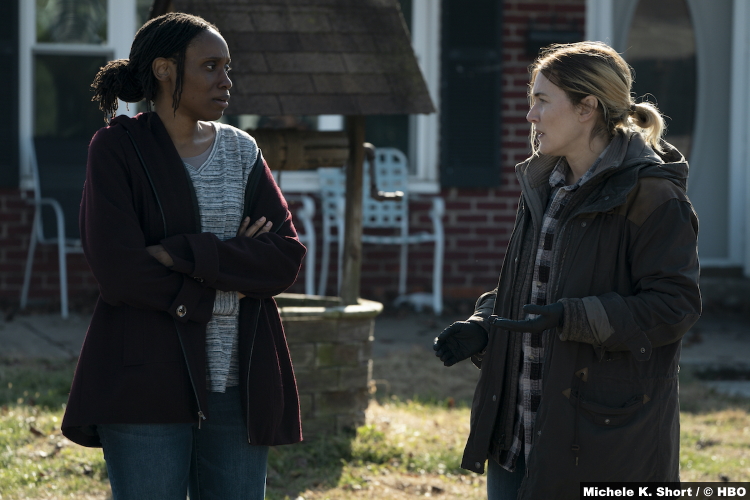 But money is probably an issue for a lot of people in Easttown. That and opioids, as we see in Mare’s first real case of the day. (A neighbor wakes her up earlier to report a peeping Tom, much to Mare’s irritation.) Her former teammate, Beth (Chinasa Ogbuagu), reports a break-in. But they’re not looking for a stranger–it’s Beth’s own brother, Freddie (Dominique Hanlon). And it’s not like he wants to be stealing from his sister–he’s apologetic even as the police are driving him away. He’s just so stuck in his pills.

The town seems so down, so depressed that Mare is obviously curious when she meets a newcomer. Who would come to a place like this and why? Well, Richard (Guy Pearce) would. He’s a professor who once wrote a fairly popular book. Mare meets him at a bar after a ceremony honoring her and her fellow teammates on the 25th anniversary of their victory. Mare tries to brush him off, but he sure is eager to see her again. 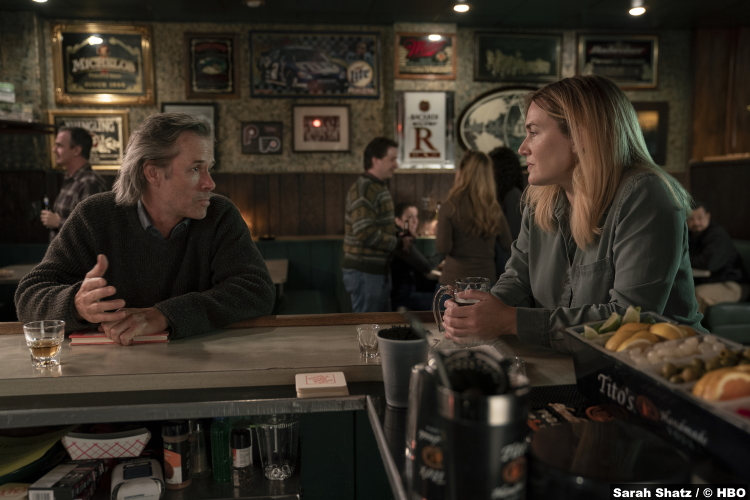 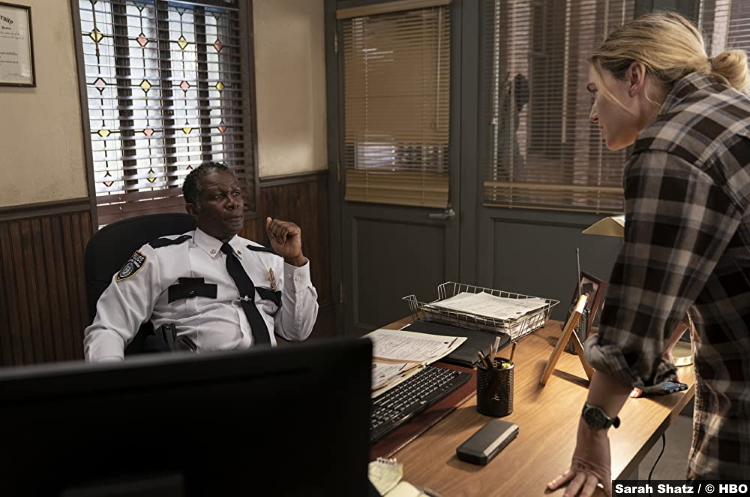 I question that because while Mare doesn’t seem to be a bad person, she can be an abrasive one. The year before, a local young woman went missing. Her mom, Dawn (Enid Graham), another teammate, holds a press conference excoriating the police department (read: Mare) for not making any progress on the case. Mare tries to argue with her boss, Chief Carter (John Douglas Thompson), that the case is unsolvable because the missing girl was into drugs and sex work. She’s probably dead, Mare says. And although she doesn’t say it exactly, the implication is that it’s a waste of time. Still, her boss orders her to start over on the case.

And it would be one thing if Mare just carried her irritation silently. But at the ceremony, when they’re all lined up to come out and be recognized, Mare lays into Dawn for going to the press instead of her. Let me put that another way. Mare starts giving a hard time to a woman who not only has cancer but has a missing daughter that the police don’t seem to give one single fig about. Jeez, Mare. The whole time, Lori (Julianne Nicholson), yet another teammate, is trying to stop her, but it’s like Mare can’t help herself. So how is she going to help anyone else?

I ask that, because at the same time that we’re getting to know Mare and her world, the show is also introducing us to teenage Erin (Cailee Spaeny). Erin had the misfortune to get knocked up by Dylan (Jack Mulhern), a classic jerkoff. Now they share a toddler, who really needs ear surgery that neither of his parents can afford. (Again, money is an issue.)

Dylan is currently in a relationship–or a situationship, at least–with Brianna (Mackenzie Lansing). She is also a classic archetype: the vindictive snake who thinks that Erin, as the ex, should cut off all communication with Dylan. As Erin says herself, though, “He’s the father of my baby, so I kinda like, have to talk to him.” 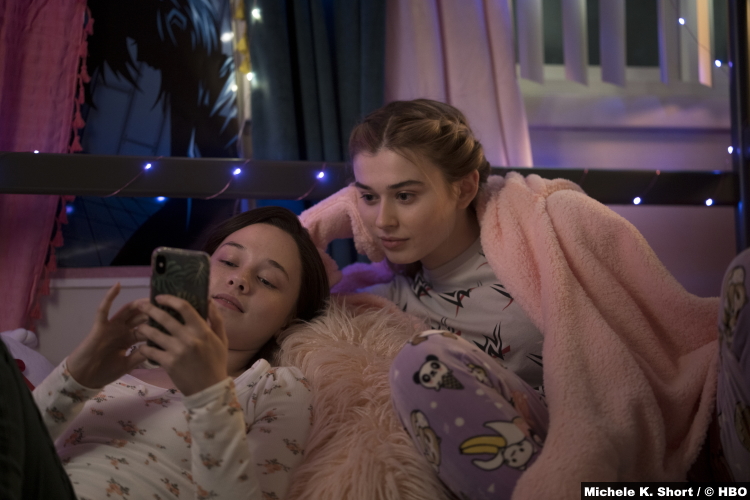 There is a bright spot in Erin’s miserable life, though, beyond her son. She’s been chatting with a cute boy through…some app. Sorry, I say with a heavy Philadelphia accent, but it appears to be a fake app and they haven’t given it a fun name like Law & Order: SVU does with its fake sites, like FaceUnion.

Anyway, Cute Boy has arranged to meet Erin at the local teen hangout, a clearing in the woods. I’m calling him “Cute Boy,” incidentally, because he doesn’t exist. When Erin goes to the meet-up spot, she’s instead confronted by Brianna, Dylan, and a group of their dirtbag friends.

Everything leading up to this was tough for me to watch, as I knew this would be ugly. And it is–Brianna taunts and attacks Erin, who just takes it. It’s Siobhan, actually, who breaks it up. She tries to get Erin to come with her and her friends, but the last we see of Erin is her wandering away from everyone.

Well, that’s the last we see of Erin alive. The next time we see her, we’re seeing her body, lying in the water, eyes unseeing.

8/10 – I don’t love that yet again, a show is going for the drama with dead girls. (You love dead girls, I say to HBO.) And like, Erin’s life is already so sad that it’s almost unbearable watching it end like this–brutal and bleak. Still, though, I wanna know whodunnit, so I guess this pilot was pretty successful overall.