If you are vaguely familiar with the Raymond Burr Perry Mason, as I am, or if you are not familiar at all, then it’s okay. This is not that Perry Mason, the defense attorney who nearly always gets his (innocent) client off through the confession of the real culprit. This is prequel Perry Mason (Matthew Rhys), back in the grimy old days when he was still a private investigator.

Like Penny Dreadful: City of Angels, this is set in interwar Los Angeles, so some themes and details will probably intersect. They already are, actually, but I’ll get to that. 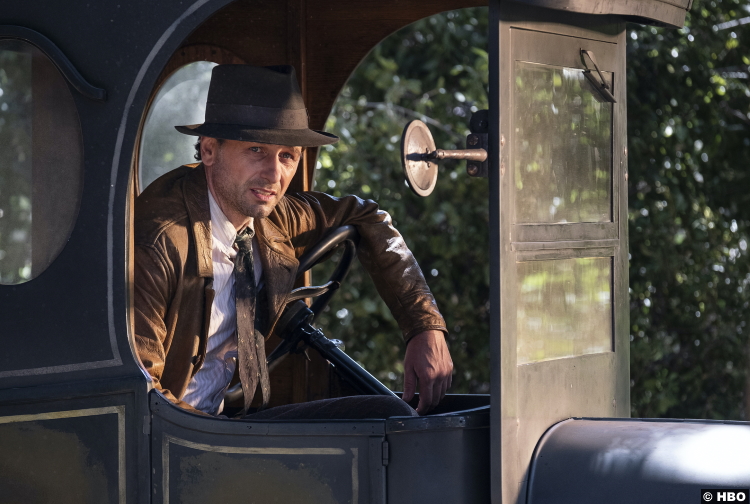 First, though, there’s this Perry Mason. WWI vet Perry Mason, who works as a PI with Pete Strickland (Shea Whigham, HBO show MVP) and frequently does work for attorney E.B. Jonathan (John Lithgow). When he’s not doing investigative work, he lives on a tiny dairy farm–two cows–and has a very…rigorous relationship with Lupe (Veronica Falcón), a pilot.

The first case we see him working isn’t glamorous. The participants are, though. He’s spying on Chubby Carmichael (Bobby Gutierrez), a character clearly based on Fatty Arbuckle. When Perry sneaks into his house, Carmichael is, uh, eating pumpkin pie off a lady’s nethers. That lady, though, isn’t just some two-bit dame. She’s Velma Fuller, apparently a starlet on the rise, so when Perry goes to collect his payment, he tacks on an extra fee for the photos of her. That’s gonna be an issue. 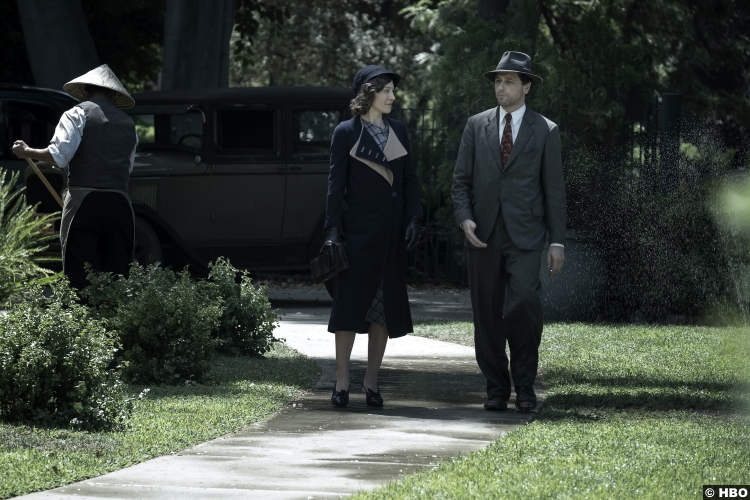 But the big case of the episode that will be the big, big case of the season is the kidnapping of baby Charlie Dodson. His parents, Matthew (Nate Corddry) and Emily (Gayle Rankin), have followed the kidnappers’ instructions to the letter. But when they step onto the funicular, sadly named “Angel’s Flight,” where Charlie was left, all they find is the corpse of their child, his eyes sewn open.

(As Elsa’s foul beast of a child on Penny Dreadful: City of Angels tells a story about a kidnapped girl with a similar twist–the eyes are sewn open–I wondered if this were based on a real case. And it turns out it was. Marion Parker, a 12yo girl, was kidnapped and murdered in 1927. The details are gruesome, so I’ll leave it up to you if you’d like to find out more.) 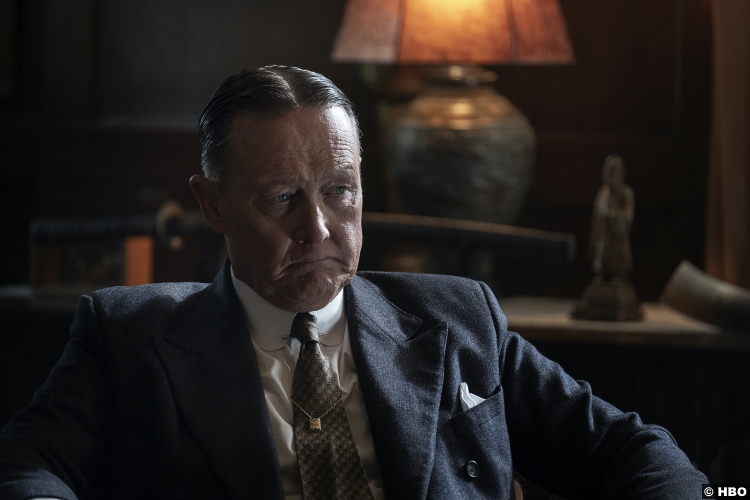 Perry is brought on to this case via E.B. Jonathan, who introduces him to Herman Baggerly (Robert Patrick). Baggerly attends the same church, Radiant Assembly of God, as the Dodsons. He wants an outside actor to investigate the kidnapping and murder because he doesn’t trust the Los Angeles Police Department. This is, after all, the same department that returned the wrong child to mother Christine Collins and then had her institutionalized when she insisted that he was not her son. (By the way, this is the crime that inspired the 2008 movie Changeling. If you’d like to read more on that, the Crime Museum has a good write-up. Be advised, though, that it contains details about crimes against children.)

Perry visits the Dodsons, where Matthew is being interviewed by the LAPD. It’s clear they want to pin this on him. Perry, meanwhile, speaks to Emily. They talk a bit about their respective sons–Perry’s son Teddy lives with his mother–and Emily says she thinks that God is punishing her.

He then starts retracing their steps. Although the LAPD is already getting aggressive with him, he’s able to deliver some solid information to them. Someone saw a car, a Phaeton, speeding away from the scene.

But that’s really all he has at this point. He and Pete think this might be an inside job, as in, whoever did it had to know the Dodsons. But as to whether the Dodsons themselves were involved is still unclear. 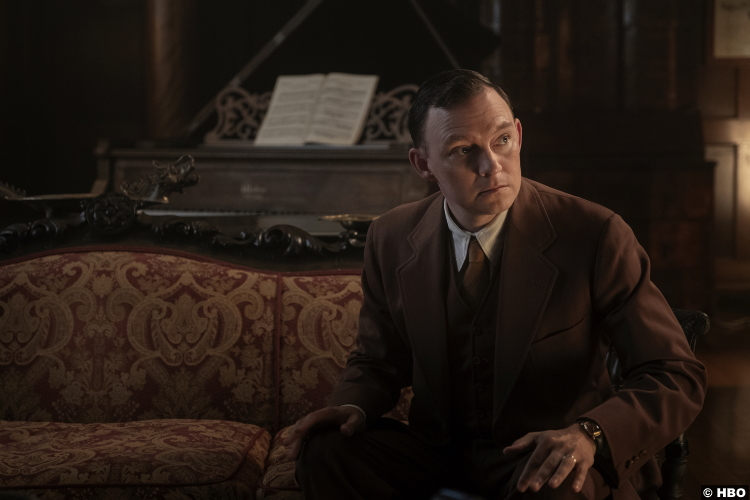 He and Pete then attend the Hammersmith Films New Year’s Eve party. They’re still trying to get that money for the photos of Carmichael and Fuller. Instead, Hammersmith sticks to the original price, $200, but subtracts $199 for the hassle. Then he has his goons rough up Perry.

Back at his sad little farm, Perry goes through the evidence he’s collected so far. In a flash that foreshadows the way he’ll solve his clients’ cases in the future, he’s struck by something. He studies the photo of a ceramic turtle he took in Charlie’s bedroom and muses, as Emily told him, that the boy liked turtles. So do I! What is it you’re seeing, Perry?

Meanwhile, one of the LAPD cops, Holcomb (Eric Lange), turns out to be in on the kidnapping. But since the getaway car has been IDed, he thinks it’s high time to eliminate his co-conspirators. So he does. It’s a hard day in Los Angeles.

8/10 – Although this is not the considerably more conservative Raymond Burr Perry Mason, it’s still an intriguing set-up. And Matthew Rhys is worth the price of admission every time.