The Expanse S05E05 Review: Down and Out – Darkness and light

He’s building it on a river of blood – with your help!

With this sentiment, Naomi sums up her feelings about Marco’s crusade against the Inners, and her heartbreak and devastation that Filip and her old crew are helping Marco.

This is an episode about being stuck, feeling powerless, and being in the dark.  It’s also about the dangers hiding in the light.

We start with Drummer and her crew, all shaken to their core by what Marco has done in the name of the Belt.  They discuss what Marco’s attacks mean – does the entire Belt need to answer for Marco’s terrorism?  Will the Inners increase security and make it harder for the Belt to do business? 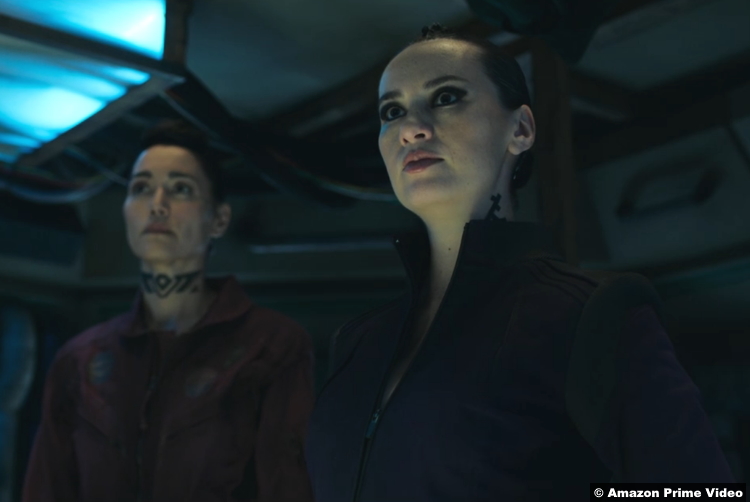 There’s a clear reference to 9/11 here, when one of Drummer’s crew says: “I hear there was dancing in the corridors of Ceres and Pallas.”  That statement calls back to the racist lie that Muslims were dancing in the streets of New Jersey after 9/11, but it’s also just a nod to how disinformation and rumor can spread so much faster than actual facts can in a situation like this.

Meanwhile, Marco has asked all of the Belter factions to meet with him.  Drummer discusses this with her crew, and says they’ll accept.  “No shadows for us,” she says.  What’s she planning?

Amos and Peaches wake up, the prison wrecked to hell around them, and try to gather their senses.  Rona, the prison guard, lets them out of the cell and they try to figure out what happened.  Eventually, they realize that their only way out is to remove panels blocking an escape ladder, but the only way to do that is to free a dangerous and massive prisoner that Amos nicknames Tiny, so that Tiny can rip off the panels as they go up.  This sequence feels sort of rote and uninteresting, even though the characters give it their all, and there’s a little drama, but honestly, it’s just a bunch of people escaping a place, and there’s just not a lot of there there.  And when they do finally reach the top, the show pulls its punches by not zooming out and showing the larger devastation from the falling rock, instead just showing us the destroyed prison.  It’s a fine sequence, but it’s just lacking that kind of tension and punch that the show normally does so well. 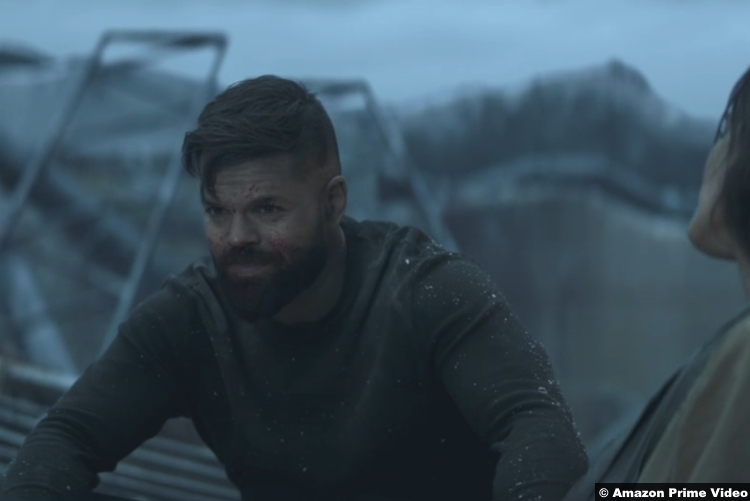 Alex and Bobbie are still tracking the Martian convoy, which is on its way to the Hungaria rocks – a series of asteroids “with a high albedo” meaning they’re very bright, and a great place to hide.  Danger in darkness, and danger in light.

Meanwhile, Naomi is trapped in her own darkness – the darkness of knowing that her son, her old crew are all lost to her, lost to a fanatical cause led by a mass murderer.  Dominique Tipper’s acting is devastating and spectacular as usual, showing all of the heartbreak and anger that she’s feeling.  She tries to sneak up on Marco and kill him with a knife, but Filip intervenes and takes her off the bridge.  He doesn’t see the knife, so he leaves her free.  Naomi catches up with Cyn, who tries to make her understand why he’s following Marco – the usual arguments about the Inners with their boot on the Belters’ neck, and how Marco is building something new.  Naomi’s fury boils over and she spits out, “He’s building it on a river of blood – with your help!”  A brilliant line. 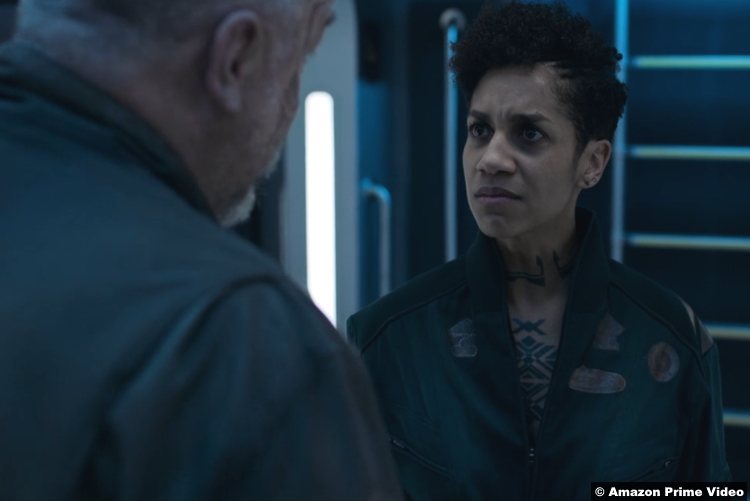 Holden can’t get in contact with anyone, and he sends a desperate message to Naomi trying to get some news that she’s ok.  He’s worried about his family in Montana and the fate of the rest of the crew.  His goal this episode is to get information out of Harley Quinn…sorry, Sakai, who grins and blusters her way through an interrogation.  There’s actually a good moment from Sakai – a tiny hesitation after Holden tells her that they’ve tracked the Belter ship’s flight plan, and the security chief says they’ll just space Sakai when they get back.  Sakai’s bluster falls away for a second, but she quickly gets it back.  It’s a subtle moment, but a good bit of acting. 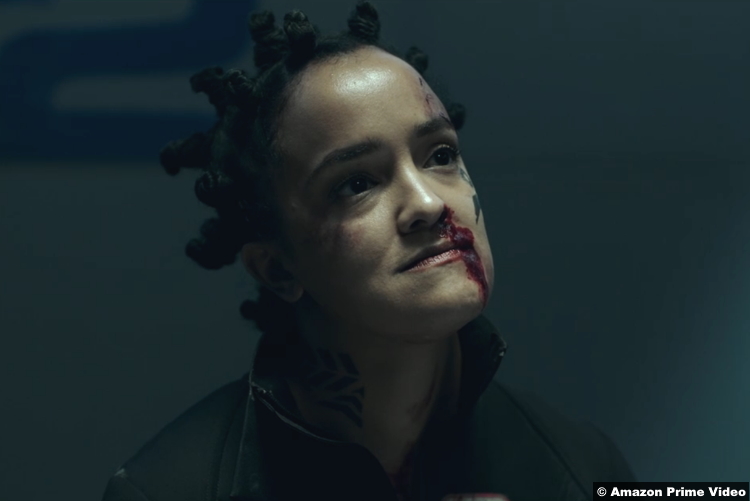 “Time to take the Roci out on a hunt.”  Holden and his security team are going to track down Marco’s ship.  Little do they know…

Later, after helping Cyn do some repairs on the ship, Naomi beans him with a wrench and sends a desperate message to the Roci: The reactor has been sabotaged – don’t start up the ship or it’ll explode!  Naomi is wrestled away from the panel and imprisoned.  Once again, Tipper’s acting is tip top here, anger and rage and desperation and heartbreak all coming to the surface – you really feel it.  Unlike Marco, who still just feels like a Bond villain. 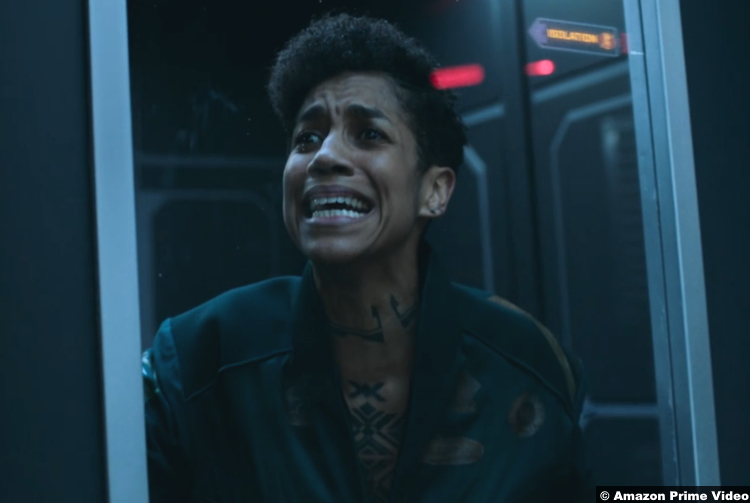 Maybe I missed something, but the revelation about Roci’s sabotaged drive seems to come out of nowhere.  And the fact that Holden sees this message just as he’s spooling up the Roci’s systems, just in time to stop before the ship blows up…it’s all a little sudden and convenient.

The episode ends with Bobbie and Alex being spotted by the Martian convoy just as they’re realizing that the ships themselves are the weapons – Marco is building an armada of Belters on Martian ships!  Alex and Bobbie have to escape a missile speeding toward them, so “here comes the juice.”  Fade to black.

7/10 – So much of this show is just so, so good, that when it misfires, it’s just a little jarring.  If I could give a rating to each character’s arc, I’d give Naomi a 9, Amos and Peaches a 6, Holden an 8, Alex and Bobbie a 9, and Drummer and her crew a 9.  I missed Avasarala this episode also – every episode she’s not in is made lesser by her absence.