In responding to a comment about Libby, I postulated a theory. Regarding what made her the way she is, I said, “I think a special mixture of early childhood trauma, barely an adult trauma, and misfiring neurons in her brain.” And although I was definitely spitballing, I turned out to be closer than I might have thought. 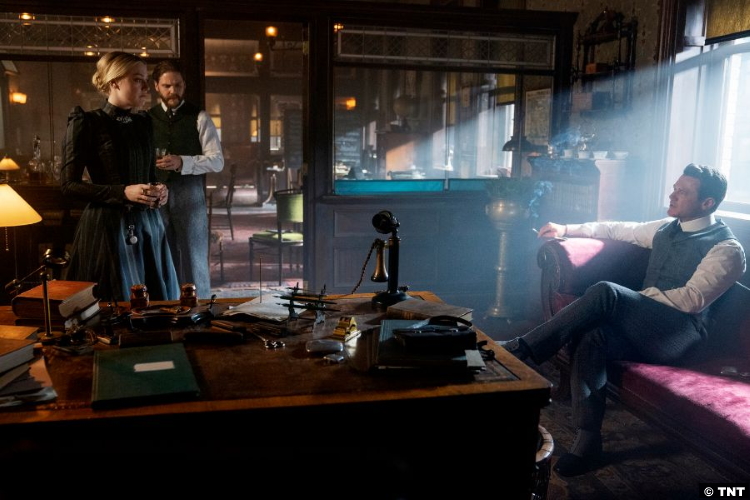 Because this week, the gang goes to Brooklyn, looking for Libby, and finds an incredibly tangled past. Her father did commit suicide–early childhood trauma. Then Libby got pregnant as a young woman and her mother masterminded a series of events that not only got Libby’s baby taken away, but also got Libby locked up in a mental hospital. A 19th-century mental hospital. Barely an adult trauma. As for the misfiring neurons, I think it’s just probable. Lots of people experience trauma both in childhood and as an adult. Not a whole lot then go on to an infant-murdering spree.

But that baby, now the child Clara, is the key. With help from Hearst, Byrnes plants a story about how Clara has been reunited with her grandmother. Then they all lay in wait for Libby to show up. Instead, some random redhead shows up in her stead, clutching a bullet as a warning to them all. Libby may be unwell, but you can’t say she’s not clever.

They search the area, because it’s pretty clear Libby’s nearby. Captain Doyle corners her and as I wrote in my notes, “She’s gonna kill you, dude.” Then I wrote, “Bitsy has plans with Lucius!!!” (Yes, three exclamation points.) Anyway, she kills him.

John is still trying to do the “what are we?” thing with Sara and I’m not sure why. I do believe that she loves him, but as she said last week, he’s engaged. (Oh, just wait.) And I think John went to Sara’s to make some romantic last stand, but instead, they got into it with Libby. Well, that didn’t work out like anyone planned. Also, I’m pretty sure this is where Sara was like, “Oh no, I love John.” At least they finally got Libby into custody. But of course, they still don’t know where the Vanderbilt baby is. 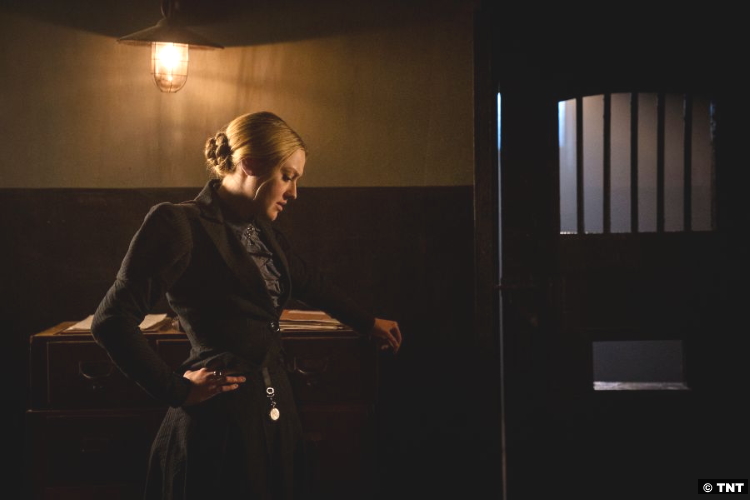 While Laszlo, the titular alienist, is mostly ornamental for these episodes, debating internally what to do about Karen’s leaving for Vienna, Byrnes is interrogating Libby. I’m sorry, I misspelled that–he’s torturing her, having his men submerge her head in water until she breaks. You have no idea what she can take, I noted, just as she bites a chunk out of one of the men.

So they let Sara in to talk to her and it occurs to me, perhaps not for the first time, that they’re basically two sides of the same coin. As such, they make a trade. Sara will bring in Clara to visit Libby, if she tells her where the Vanderbilt baby is. Libby eagerly agrees, only to crumble when Sara just walks away. I have to say, while I love Sara and want her to rule everything, this is one of those times when I’m not sure I back her play.

But anyway, they get the baby back. However, the Dusters take advantage of the light police force at the station to raid it and spring Libby. Sara had told her that Clara was at Laszlo’s institute, so Libby and Goo Goo go steal her, wounding Lucius and murdering Marcus in the process. Farewell, Marcus, I hate how prophetic your dream seems in retrospect. 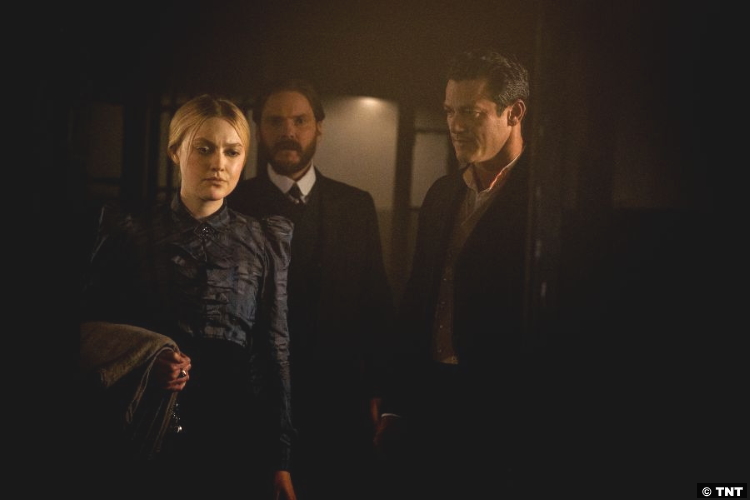 They find them Libby and Goo Goo holed up in Libby’s old manse and not a moment too soon. Clara is a real little girl and it made me intensely anxious the longer she was with Libby, because Libby cannot abide imperfection in her fantasy world. The gang, plus Byrnes and his men as backup, silently descend on the mansion. And when Goo Goo comes to check out the noise, this time Lucius doesn’t hesitate before dropping him.

Sara and Lazslo, meanwhile, manage to talk Libby into giving up Clara and to talk Byrnes and company into taking Libby peacefully. She’s probably heading for a violent end, anyway.

John, on the other hand, is heading for a Violet end. (I will not apologize.) Violet is pregnant, so John’s going to get live out his dream for a family. I don’t know if it would or would have not worked out with Sara, but I think, despite her feelings, she didn’t want it to.

She wants what she has at the end, a detective agency full of ladies, including Byrnes’s own daughter Kitty (Jordanne Jones). There’s a new century, coming after all, and who knows what could happen?

8/10 – While the relentless pace of two episodes every week felt, well, relentless, I thought this was a satisfying ending to the season. I would, of course, love to hear your thoughts. And if you’ve had just about enough of baby murder, I have, too. Join me for probably some supernatural murder next week, instead, as I pack my bags and drive into Lovecraft Country.