Well, well, well. It seems as if Goo Goo Knox had other reasons for being cagey about EH’s identity. As we find out this week, EH–Libby, of course–is his gal. 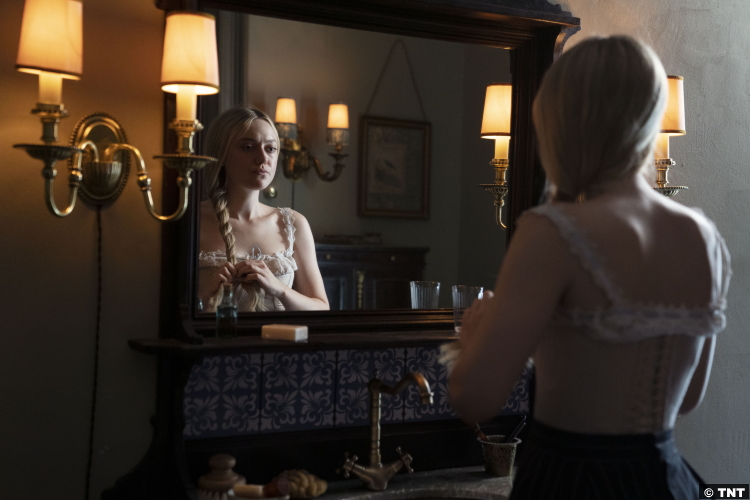 Also, I love and encourage whatever is developing between Lucius and Bitsy. Okay, back to the matron’s apartment. Obviously, they find her body there. So they get the whole gang over there and they decide that John will run an image of Libby in the evening paper.

Around the same time, they find out that Colleen identified a picture of Libby in a book of known associates. That’s how they make the connection between her and Knox. So Sara, of course, wants to go charging back over to the west side to find the Hudson Dusters.

And despite their dust-up–pun partially intended–last week, John doesn’t love this idea. He especially doesn’t love it when they return to Sara’s office and find that someone has clearly been in there. They figure out it was Libby when they see the “note” she left on the chalkboard: a bunch of drawn eyes and the word “Stupid.” That’s unsettling, sure, but she also took Sara’s father’s gun.

After that, John takes Sara to his house and is like, now you just sit right here, little lady, while I take my betrothed out to dinner. I’m not sure who he thinks he’s talking to because surprise, surprise, Sara leaves.

Cyrus gives her info, but he also begs her to leave it alone. She won’t, duh, and especially not when Joanna offers to help. I’m not sure if she regrets that move when it puts her in an alley, watching Goo Goo and Libby go at it. Their particular kink, upon which I shan’t elaborate, also came up on this week’s Perry Mason. I am truly blessed.

Anyway, Sara goes after Libby, while Joanna interrupts John’s dinner to tell him what’s up. And while there is a tense scene between Libby and Sara, it ends in the second-best way it could–with an unharmed Sara holding the also unharmed Linares baby. (The best way would have been if Libby had not escaped.)

And what a banner ending to the evening for Sara. First, Laszlo, who went out on a kind of date with his lady friend, Karen Stratton (Lara Pulver), calls Sara’s work a “tremendous achievement.” I almost had to sit down after hearing that. I was already sitting down, but still. 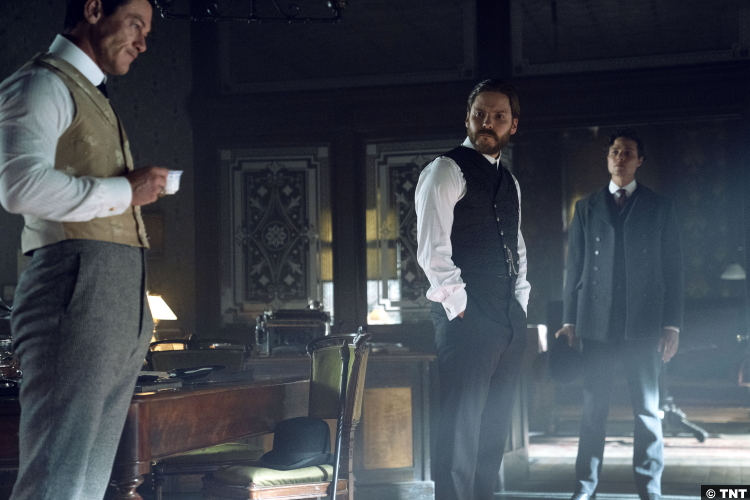 Oh and then she has sex with John. Actually, it’s so tender that if my heart weren’t three sizes too small, I might describe it in more romantic terms, but I just cannot. I will probably reblog a gifset of it on Tumblr, but that is MY time.

Unsurprisingly, though, he’s like, “What are we?” afterwards and she’s like, Well, you’re engaged. At least, I think that’s what was happening–I was watching this scene through my fingers while I made my dog keep her paws over my ears.

Outside, Libby is clearly unraveling. She has enough wherewithal to clean the blood off her hands, but she’s also wailing at the same time about losing her baby. And New York’s always been like this, because people barely pay attention. Unless, you know, someone’s rich.

Or you’re Houdini, whom Laszlo goes to see at the request of one of his students, Paulie (Lucas Bond). Unfortunately, the boy gets a little too into the magic and almost hangs himself trying to imitate the great escape artist. That’s enough for Markoe to make his move, getting Laszlo’s license suspended.

Byrnes and Hearst’s next move does backfire, though. Hearst publishes an expose of that wild woman who found the Linares baby: “UNCONVENTIONAL LADY DETECTIVE RECOVERS SPANISH CHILD.” It’s supposed to embarrass Sara, I think, and I guess push John closer to Violet. Instead, it makes Sara a star.

Sara, though, could not care less, because she’s focused on finding Libby. Once she realizes where Libby must have been keeping the babies–the burned-out boardinghouse–she’s on the trail again. And later, as she and John are realizing that the Vanderbilt crest is on some of Libby’s stolen items, Libby’s stealing the Vanderbilt baby in Central Park. 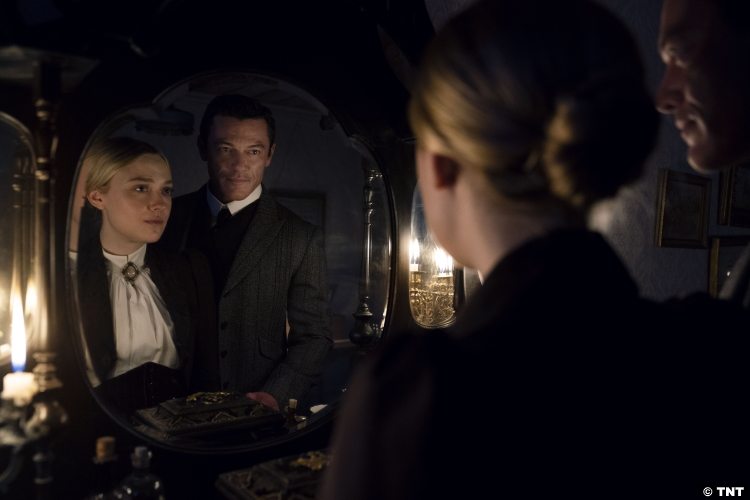 Cornelius Vanderbilt II, aka Anderson Cooper’s great-grandfather, sends a carriage for Sara and boy, does she look like hot stuff, because she’s already got evidence. Take that, Byrnes and Hearst. And they do, because Sara’s in charge now.

By episode’s end, they still don’t have Libby (or the new baby she’s stolen), but they do have a major lead. Remembering Libby’s story about her father’s suicide, Sara shares with the group. Laszlo, whom Vanderbilt has gotten reinstated, suggests that Libby was telling the truth. So John searches the newspaper archives and finds the story, which mentions that the family lived in Brooklyn. So we’re headed out of Manhattan next week.

8/10 – Hot damn, the Vanderbilt mansion is fancy. Anyway, I’m fascinated by the relationship between Libby and Goo Goo and wish we got more insight into it. The show already feels like it’s moving at lightning speed, and these superficial glimpses don’t help.