Hello, hello, and welcome to this season of The Alienist. Despite the slight title change, this is a continuation of season 1. If you didn’t see that season, then you can catch up with my reviews beforehand. But if you just want to dive into this season, here’s a quick introduction. An alienist is what we used to call psychiatrists. Based on the books by Caleb Carr, this show, which takes place in fin de siècle New York City, is about an alienist, Laszlo Kreizler (Daniel Brühl) who solves crimes. Well, he solved one series of crimes with help from Sara Howard (Dakota Fanning), the first woman in the NYPD, reporter John Schuyler Moore (Luke Evans) and the proto-criminalist Isaacson brothers, Lucius (Matthew Shear) and Marcus (Douglas Smith). This season will see them tackle a new case. And if you couldn’t handle the first season with its crimes against children, then you’re definitely going to wanna tap out for season 2, which is about crimes against cradle babies. Either way, I’m getting started. (Note: This covers the first two episodes, as they comprise the premiere.)

First of all, this season takes place in 1897, a year after the last season. And it begins like a fairy tale, with a figure in black lurking around a lying-in home–kind of an obstetric hospital–just as a baby goes missing. The baby’s mother, Martha Napp, sounds the alarm, but it’s pretty useless. It seems like the bad is coming from inside the house. 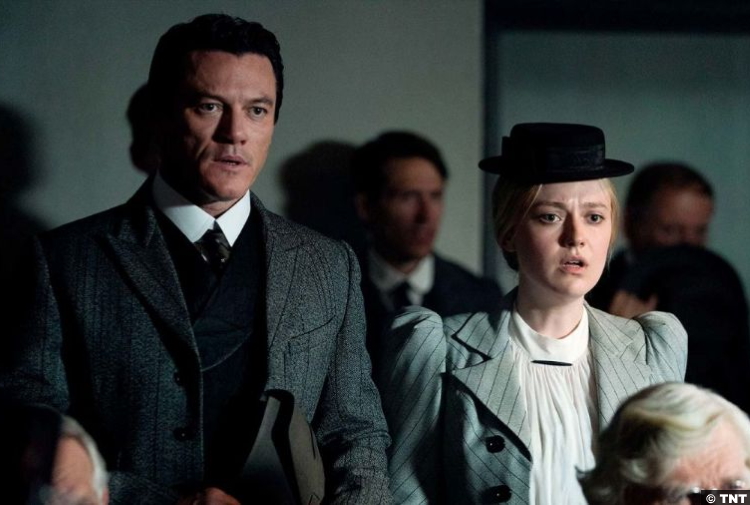 But it’s still sad when she’s later convicted of her baby’s murder and sentenced to death. In the year since the child murders case, the gang has scattered, but they’re all there for the execution.

Sara, at least, speaks up and tries to stop the execution. It would appear as if there were logical objections–after all, they haven’t even found the baby’s body. If she killed her baby in the hospital, then you’d think they would have found it by now.

It’s to no avail, though, and Martha, like the first woman to face the electric chair in real life–Martha M. Place–is electrocuted. The gang goes back to their separate corners. Laszlo is still an alienist, John still works for The New York Times, and the Isaacsons are still analyzing crime scenes for the NYPD. Only Sara has moved on, establishing a detective agency.

However, the old excitement isn’t really there. Her cases tend more toward rich folks who think their servants are robbing them. Laszlo visits and Sara offers him a drink. She has bourbon and also bourbon. What a mood. Oh and good news, Laszlo hasn’t stopped analyzing his friends when he gets agitated.

All of this, by the way,  is taking place against the backdrop of a “delicate political situation” that will eventually boil over into the Spanish-American War. So it’s unfortunate for a multitude of reasons that the next victim is the family of the Spanish Consul-General, Narciso Linares. His wife, Isabella (Bruna Cusí) is taking a bath in a tub I just have to admire. Anyway, when she returns to check on her infant daughter, she finds a grotesquely defaced doll in her place. She doesn’t want to go to the police (because of the politics), so she hires Sara. 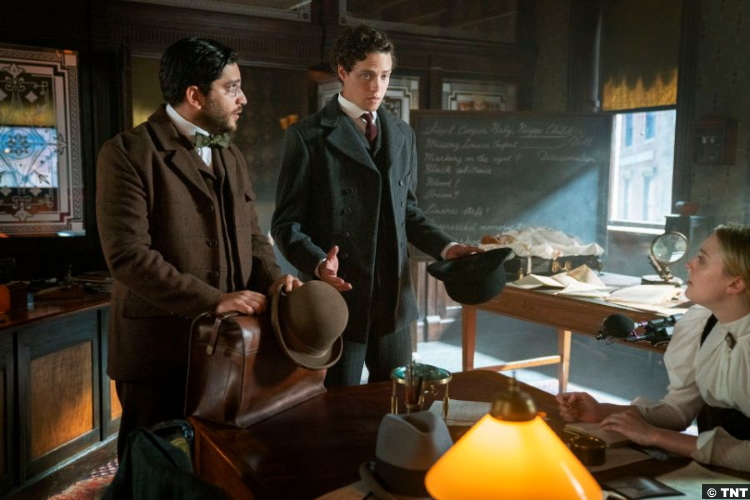 While Sara is examining the doll, a poor little girl is finding a baby’s body in a display of toys at the Siegel-Cooper department store. (That’s where the doll came from, by the way.) After examination, the Isaacsons will determine that the baby was first poisoned, then asphyxiated. When they let Laszlo look at the body, he identifies it as the missing Napp baby.

At the department store, Sara and John find out that someone known only as EH bought 5 dolls in the same style as the one left at the Linares home. There’s an address attached and I have to choke-laugh as John says that “Hudson Street is a preserve of ruffians and hoodlums.” I have a friend who, until last year, lived just off Hudson, so…checks out.

But back in the say, it really was true. It was the stomping grounds of the Hudson Dusters, a gang of, well, ruffians. John and Sara’s trip to the wilds of the West Side not only takes them to visit Cyrus (Robert Wisdom), who now runs his own bar, but it also puts them in the path of the Dusters. Goo Goo Knox, their leader, used to own EH’s former address. (It was a boardinghouse before it burned to the ground.) It’s clear he knows more than he wants to share, but John and Sara can’t convince him to do his civic duty. Maybe it was Sara threatening to shoot him into eunuchism. 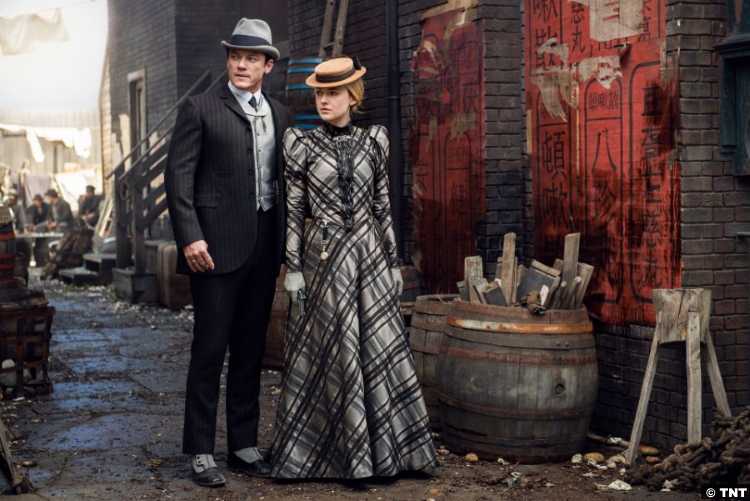 But there are a lot of potential enemies this season. Byrnes (Ted Levine) is still around, stirring up trouble. And Laszlo, for his part, hates Dr. Markoe (Michael McElhatton), the doctor at the lying-in home. Hates him so much, for instance, that he interrupts a lecture to harangue him for his part in Martha’s death. He tells him, “You had a mother executed.” Yeah, well–it’s not the first time. After all, he’s somebody that we Roose to know. (I will not apologize for that.)

And it may not be the last. Because as the episode draws to a close, Markoe is delivering another baby. We’ll just say it died, he tells his right-hand woman, the Matron (Heather Goldenhersh). What on earth is going on in this place?

Oh and speaking of the Spanish-American War, John is now engaged to William Randolph Hearst’s maybe-daughter, Violet (Emily Barber). That should bring only good things.

8/10 – Although I’m not sure why we need two episodes at once every week, I say through tears, this was a heckuva way to start out the season.