One of the things I love the most about Roswell, whether the original or Roswell, New Mexico, is the Crashdown and its cleverly-named menu items. So I was pretty psyched that so much of this episode takes place there.

Poor Liz is just trying to close, but she has visitors all night long, starting with Kyle and Steph. Their relationship is progressing nicely, at least until Kyle spills the beans about knowing about her illness. Liz being so supportive was very cute, though.

Of course, the most important storyline this week is the one we began last week–the revelation that Sanders is Walt. Although hesitant at first to talk, Sanders soon tells Michael and Isobel the rest of the story. Lotta bean-spillin’ this week. 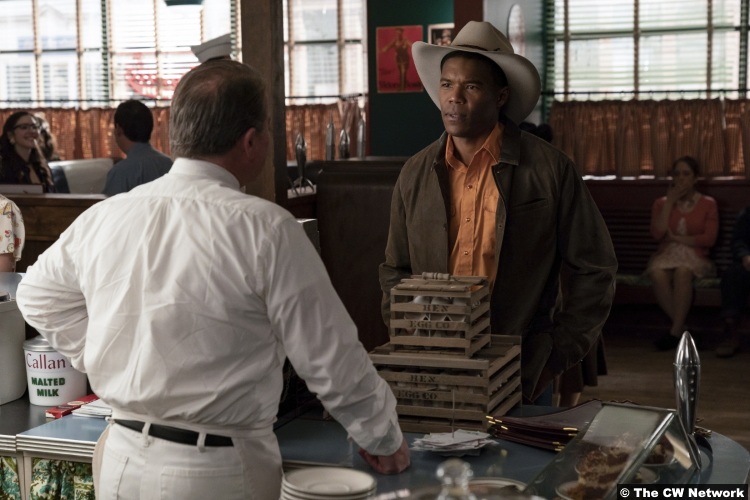 Anyway, he met Roy Bronson at the Atomic Cafe, the grandparent of the Crashdown. Little Walt had a terrible home life, so he started hanging around the Longs’ farm. He was there the night the aliens came. And then, as we saw, they became a kind of family. Until the fair.

Well, the fair went fine. They won the pumpkin-chunking contest as we saw. But someone else saw, too. Harlan Manes (Jason Coviello), Tripp’s brother, saw the photo in the paper. He brought it to Tripp, who was dining at the Atomic Cafe.

They planned their raid right then and there. I thought it was weird that Tripp is practically hollerin’ their plans, especially with Walt standing like, two feet away. But it turns out, there’s a reason behind that. Alex ain’t the only Manes man who fell for an alien. Harlan, meanwhile, is the same kind of Manes man as Jesse, which would make sense, because he’s Jesse’s grandfather. 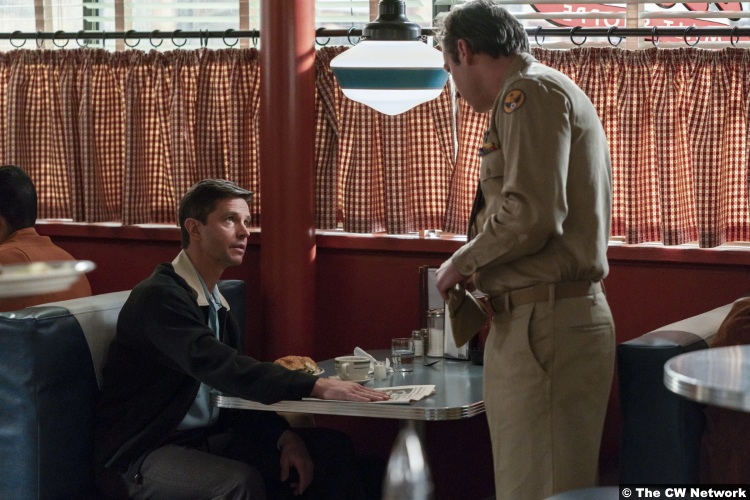 So the raid went on and it was terrible–they shot neighbors who just came to see what the ruckus was. But Walt escaped, albeit after losing an eye. Nora, of course, was taken to Caulfield, and Louise was shot. They left a map to the pods for Walt, so he’d visit the kids from time to time, just keeping watch. And then one day, they were gone.

After that, he still kept watch over Michael. He knew that there was no way they’d let him adopt him, and he probably wouldn’t have been the best parent, anyway, but he took Michael in when he could. It’s repayment for the year and some months that he got to spend with Roy and Nora and Louise. And my heart can’t take this.

Let’s change the subject. Sheriff Valenti picks up Max, who looks really suspicious, lying unconscious in the hotel parking lot where he last saw Charlie. She brings him in and grills him, because all of his behavior recently has been suspicious. It seems that she’s been worried about this for some time. She was the deputy, after all, who took the call about three naked children wandering the desert. It upset her, obviously, so she took an interest.

She reveals that it was Max, not Michael, who acted disturbed at the group home. When Michael stopped him, taking away the crayon Max was using to color the walls, that was the moment when the Evanses walked in. So they adopted Max and Isobel, because Michael looked like a little vandal.

Besides that, he’s got a history with Jenna and a history in general of being a big moody rage baby. So she arrests him. However, Kyle saves him by giving him the perfect solution: Max doesn’t have to tell Sheriff Valenti the whole truth, but he needs to tell her a truth. So he does, showing her his surgical scars as a way to explain where he’s been. He also tells her that Noah was abusive and for good measure, he believes Noah was a serial killer. Basically, he told her everything but aliens. So she lets him go. 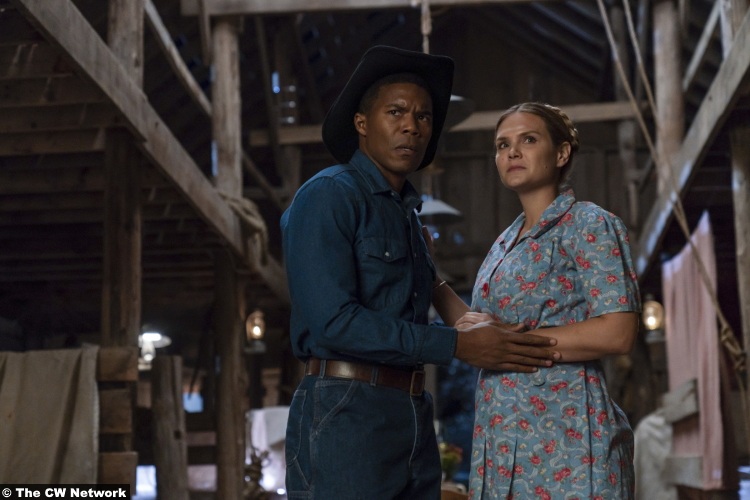 And after Alex helps Michael realize that Tripp was trying to help the aliens, Alex heads to the Crashdown, where Isobel is excitedly marrying ketchup. Good for her. Anyway, something Tripp said about the diner, which he kept going to even after it became the Crashdown–he even gave a young Arturo seed money to buy it–is sticking with Alex. He said he liked a particular booth at the Crashdown because of the light.

Liz points out a booth that’s popular for selfies because of the light and they check it out. It doesn’t take long for them to find a loose brick in the wall, which I’m surprised no one else has noticed, but okay. Inside an envelope is a picture of a much older Louise. “She lived,” I whisper. “She lived,” Isobel says. And on the back, along with that alien symbol Max draws, is a note: “Thank you, Tripp.”

So Max and Isobel’s mom might still be out there somewhere. The aliens clearly age, but I don’t know their lifespans–I’m not a scientist. But speaking of, Liz, calm down. How are you going to explain your universal vaccine? “Uh, it’s not not aliens?”

9/10 – Although Maria’s absence seems weird, especially after last week, overall this was a really great episode. We learned so much more about the ’47 crash and the parent aliens, and I’m excited to see what’s to come. I just hope that if Louise is out there, Jesse doesn’t get to her before her children do.