Earlier this month, WWE put on the most bizarre, lowkey, unique WrestleMania events in history. If the company lasts another fifty years, it’s likely we’ll never see another Mania as we had in 2020. For nearly two months, WWE has been operating without one of the most critical components to any successful pro wrestling venture: The fans. Maligned though we may be, and sometimes rightly so, there has never been a better illustration of just how important it is to have an audience at a pro wrestling match.

In fact, I would argue that, after the talent itself, the fans are the second-most important component to having a successful wrestling venture. It was a hypothesis worth debating during the “peak” of TNA, when the company had talents like Samoa Joe, AJ Styles, and Kurt Angle running around. What was holding them back? It was easy to say “the creative department” but that can’t be all there is to it since, as we’ve observed many times over the years, WWE’s own team is just as often creatively bankrupt. Instead, the reason peak-TNA struggled to expand their meager footprint was because they were filming their show at Universal Studios, in front of tourists with little interest in the product. TNA proved that you need an invested fanbase or your product stinks.

The COVID-19 pandemic has proven that you need a fanbase or your product is dead.

WrestleMania 36, on paper, was a solid show. It had some clunkers and some stinkers, but it also had some matches that (again, on paper) were worthy of the event. Nevertheless, the one thing that held the show back, and the same thing that has held back every Raw, SmackDown, and NXT since the quarantine began, is the weird insistence on continuing, business as usual, with the same sorts of matches, the same commentary, the same camera work (apart from a moving of the hard camera), as if nothing at all had changed.

The result is a product that, on mute, basically looks like a Raw, SmackDown, or NXT, but when you turn the sound on the show feels hollow, cheap, and strange. The fact that WWE pretends as if nothing has changed makes it all the more strange, too; it’s a very The Emperor Has No Clothes situation. The only time the show has had any sort of energy, any sense of being alive, or any kind of moment worth talking about has been when they deliberately and obviously eschewed the same old format and instead embraced the limitations of the present circumstances.

As the old saying goes “necessity is the mother of invention.” 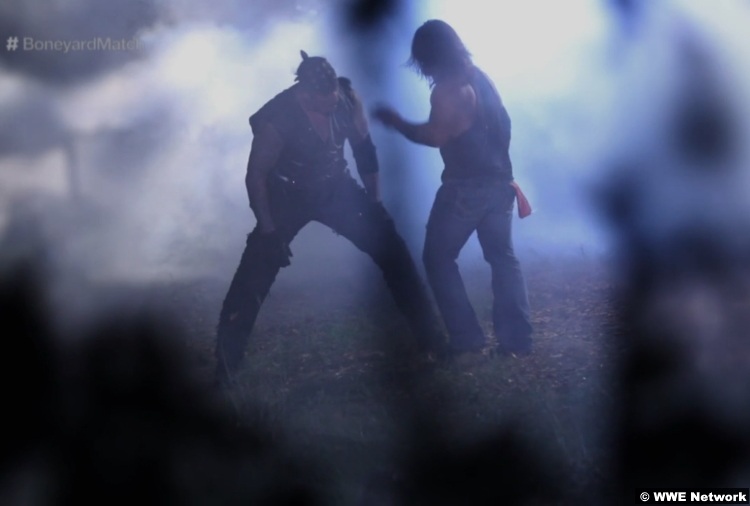 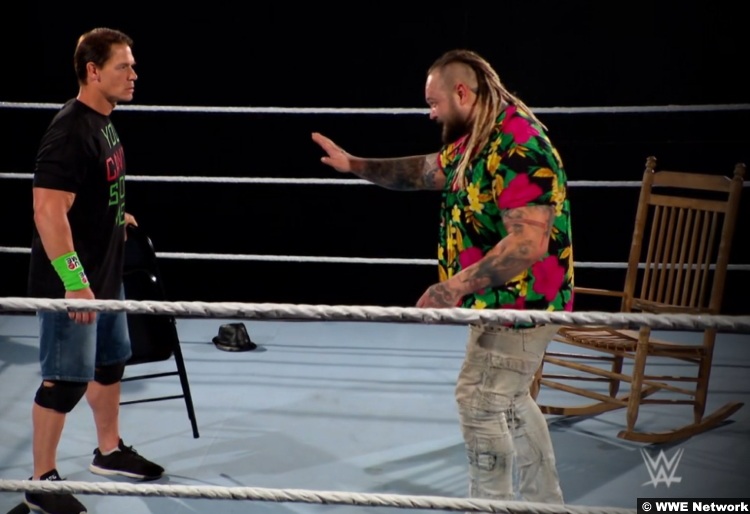 While under quarantine and needing to be creative with two of its most important stars, The Undertaker and John Cena, WWE finally created something that made WrestleMania 36 feel like the showcase of the immortals it’s annually hyped to be.

The background is the fact that Undertaker is 55, with hip surgery, concussions, and over thirty-three years wrestling as a 6’10, near-300 pounder to his name. He’s not the same man he was ten years ago when he put Shawn Michaels into retirement. On the other hand, John Cena is semi-retired and focused now on his movie career. That means wrestling twenty-minute athletic exhibitions is a Hollywood liability issue and, thus, is out of the question. Two years ago both men wrestled a two-minute non-match designed to get both men on the show without asking them to do anything taxing. This year something more creative was needed, something more “sports-entertainmenty.”

Undertaker “wrestled” AJ Styles in a Boneyard Match that was little more than a brawl around what looked like the outside of the bar Pee Wee Herman went to and played Tequila. AJ, Gallows, and Anderson got to bump around, sell their butts off, and make the Undertaker look better than he has since 2010. The match was not a match at all; it was a cinematic “story,” both in the way it was paced and in the way it was edited. Asking the Undertaker to get in the ring and go twenty minutes, even with someone like AJ Styles is simply not feasible. The company could have done a simple squash match that everyone would have forgotten about in a week but instead, they took advantage of the fact that they had no in-house audience to cater to and they did something special. 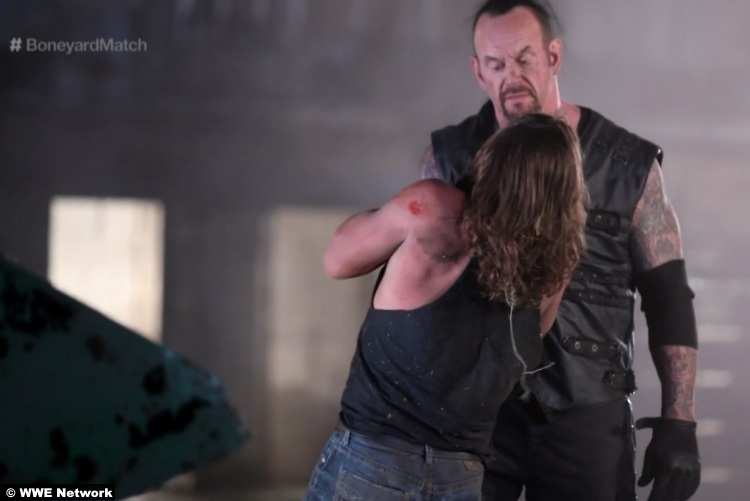 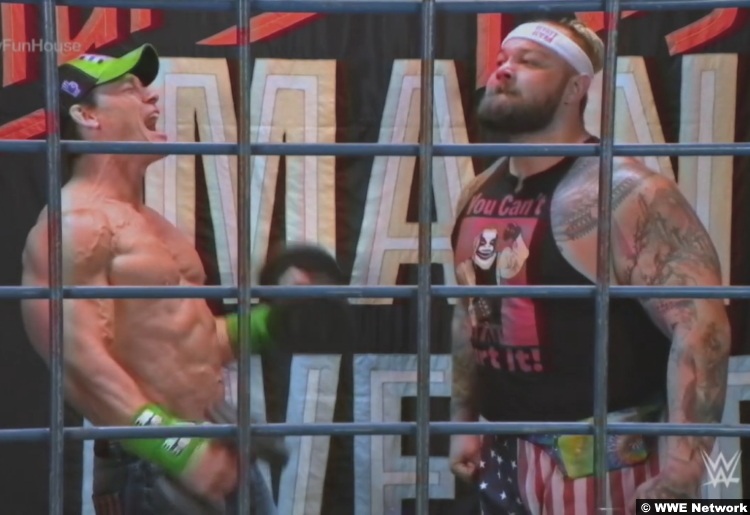 Never before have I watched a pro wrestling “match” that featured no actual wrestling of any kind, lasted nearly fifteen minutes, and yet completely captivated me. This kind of match—the “Firefly Funhouse Match”—didn’t need an audience; it would have been hindered by an audience, or by commentary. It only needed its two stars, the crazy idea at the heart of the “match” and the willingness to go all-out with it.

To boil it down, these “matches” worked for three reasons…

1. They worked specifically because there was no inane commentary walking us through it basically telling us what we were seeing as if we were idiots or blind. AJ Styles provided plenty of monologuing to carry their match, and the Cena/Wyatt match was basically a short film in and of itself.

2. They worked because they told a story, which is always the reason 99% of all wrestling matches work, whether they are athletic exhibitions or weird cinematic things like this. AJ vs Undertaker was about a predator looking to leave his mark by attacking an old, broken vet with a name people respect as a legacy. Undertaker had to summon his old moxie to put the cocky challenger in his place. Cena vs Wyatt was, or at least should be, the final match of John Cena’s career. It was the perfect retrospective of his career, a critical (Lynchian) examination of why John was the perfect poster-child for Vince to push to the moon, what it took to reach that point, and what that means for the man at the heart of that ten-year run at the top. In the end, Wyatt puts Cena away, not simply by pinning him and watching as he rolls out of the ring, head hung low. No, Cena loses and then literally disappears from WWE, having put over the supernatural force that he defeated six years previously at WrestleMania. The match told a story and that made it effective.

3. They worked in a way the normal matches on the show didn’t, specifically Edge vs Orton and the two world title matches because they didn’t try to be “WWE as usual, only without the crowd.” As said, a show without a crowd—even after all these weeks—isn’t getting any less awkward or weird. Wrestling without a crowd is like Star Wars without John Williams…

The result were two WrestleMania matches fans will never forget.