The Andre the Giant Multi-Man Over the Top Memorial Battle Royal Brother Jack Dude with Cheese! (an analysis)

Very often, WrestleMania will feature at least one contest designed to feature all the “leftovers” who, for a variety of reasons, didn’t get a proper match on the main card. Sometimes these blatant “throw away” matches are given a gimmick or a little push to justify its place on the biggest show of the year, but sometimes it’s just tossed out there with little fanfare. 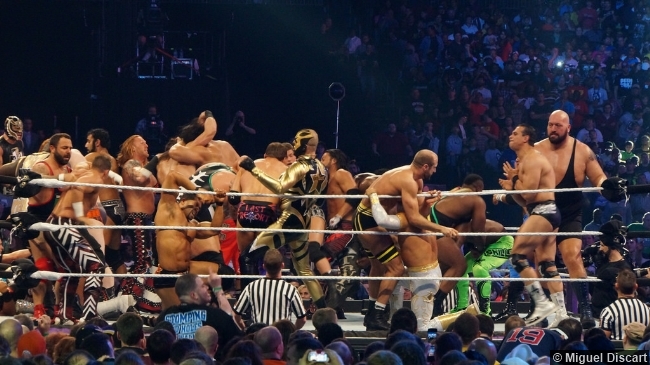 At WrestleMania 2 there was a 20-man battle royal, featuring a mix of WWF Superstars and NFL players. At WrestleMania IV, another 20-man battle royal took place, this one with far less promotion, featuring all the guys not good enough to be in that night’s WWF Championship tournament. Whether intentional or coincidental, Bret Hart was the last man eliminated in both contests. WrestleMania VIII skipped the battle royal and instead featured an eight-man tag match. Without it, poor Repo Man would never have made the card, to say nothing of “wrestling superstar” Virgil.

At least the six-man tag at WrestleMania XII had some real star power to it. That match featured the likes of Vader, Yokozuna, Owen Hart, British Bulldog, Jake Roberts (…and Ahmed Johnson). Another tag match happened a year later, as WrestleMania 13 hosted a four-team elimination match, where the winner would be number one contenders to the Tag Title.

Not to be outdone, WrestleMania XIV combined the old “get everyone on the card” battle royal idea with the more recent “just throw a bunch of tag teams on the card” idea. It brought into the world the first ever fifteen(!)team battle royal, all to–again–determine the number one contenders to the Tag Title. All those bodies and all that mayhem, and the match only lasted eight minutes. That’s the Attitude Era for ya.

Did someone say “Attitude Era” because WrestleMania XV, THE show that covered everything bad about that period of Wrestling history (the way X-Seven highlighted everything good), found a way to one-up XIV’s insanity. It featured a 21-man battle royal where the last surviving pair of men–whoever they were–would be awarded a Tag Title match later that night. After all that convoluted booking, the winners–D’Lo Brown and Test–STILL ended up losing their title match. Vince Russo, everybody.

At least WrestleMania 2000 added some spice to its battle royal. The Hardcore championship was at stake here, only in those days the title was defended 24 hours a day, 7 days a week. The 24/7 idea gave the former “jobber” title a real presence on TV and often was featured in memorable segments. It changed hands countless times during the match, and on a show that was a bit of a letdown, this throwaway battle royal was one of the highlights of the night.

For years the WWF would throw jobbers, nobodies, has-been’s and never-were’s out there in a nothing-match, but by WrestleMania 21, the roster was leaner and loaded with talent. WrestleMania itself also evolved into more of an “entertainment” show than a straight-wrestling event. As such there was less time to showcase a lot of the talent on hand.

Enter: Money in the Bank.

It was a concept so perfect that it’s a wonder it wasn’t thought up earlier. Take the six-eight guys who have nothing to do and throw them into a match. Not just any match, either, but one of the most consistently-entertaining match-types in the WWE arsenal: A ladder match. The prize was also ingenious: A contract guaranteeing the winner a WWE Title shot, good for one year, anyplace, anytime. Guys like Edge, Rob Van Dam and CM Punk each took their MITB wins and elevated themselves from mid-carder to main-eventer. Also Mr. Kennedy and Jack Swagger happened, but let’s move ahead.

For five years the Money in the Bank contest was a highlight of WrestleMania. It was so successful as a match and as a concept that it was spun-off of the big show and given it’s own PPV. THAT PPV has in turn become so popular that it is basically the fourth biggest show of the year.

After Money in the Bank was taken from WrestleMania, the show went back to having boring “superstar-stuffed” nothing-matches. A twenty-three man battle royal for the US title happened on the preshow of WrestleMania 27. A twelve-man tag match was thrown onto the WrestleMania card with the gimmick that the winning team’s brand’s GM (got that) would be the GM of both Raw and Smackdown. It took longer to type that sentence than the amount of seconds fans cared. If you don’t remember, Miz won for his team. A year before that, The Great Khali won the US title in the battle royal. Nobody cared.

WrestleMania has needed a new “money in the bank” kind of match ever since WrestleMania 26 ended. Fans became spoiled at seeing an overlooked midcard superstar get a big moment and that made them excited to see what was in store for him.

Last year’s battle royal was the first to recapture the kind of fan enthusiasm that MITB generated annually at the big dance. It was given a simple trophy to fight for, in honor of one of wrestling’s most beloved figures, a lot of hype from Hulk Hogan himself and good variety of competitors to compete for it. In the end, Cesaro had a huge moment when he hoisted the Big Show up and tossed him seemingly-effortless over the top rop to win. He then got a handshake from the spiritual successor to Andre the Giant, in a move that SHOULD HAVE turned Cesaro into a made man. The fact that the company dropped the ball with him does not take away from what the Andre the Giant Battle Royal win did for him. It solidified him as a guy who deserved to be taken seriously (even if the company did not follow up on it).

This year the contest has a little less hype around it (especially with the announcement it will air on the kick off show!), but that doesn’t mean it’s another in WrestleMania’s long history of throwaway matches. On the contrary, instead of the story being one guy’s quest to win the trophy, this year there are multiple smaller stories all converging on the event.

The match itself has been pushed as a new featured attraction of WrestleMania. It may not have a John Cena working it, but it has star power. And just as important as star power, it has storylines intersecting with it, making it a match where Something Important might happen.

The finish might finally kick off the long-awaited Miz vs Mizdow feud or it might kick off the long-unwanted Kane vs Big Show feud. It might be the place where Goldust finally gets a big WrestleMania moment. If not Goldust, then maybe Curtis Axel can ride his #AxelMania momentum to a big win. A returning superstar could make a splash by becoming a surprise entrant and winning the match; maybe Sheamus or Bo Dallas. Hideo Itami (NXT entrant) could start his main-roster career with a bang. And even though he’s already one half of the tag champions, you wouldn’t find anyone complaining about a Cesaro repeat-victory.

After a long history of forgetful matches with no stakes and little fan interest, WrestleMania could have finally found a great concept to feature on the show every year. It’s never going to become bigger than it is, so don’t expect an “Andre the Giant Battle Royal PPV” anytime soon, but with the right amount of care put into the hype, and–most importantly–a smart finish where the winner actually gets a sustained push off of it, then it has potential to be a great showcase for a wrestler that might be on one of those big one-on-one contests at next year’s WrestleMania.

One thing’s for sure: The Andre the Giant multi-man over the top memorial battle royal brother jack dude with cheese is here to stay.