The idea of the men in black–the guys, not the movie franchise (or the song)–is a curious phenomenon with a longer history than you might think. The first reported incident comes from 1947, an auspicious year in UFO history. But it has nothing to do with Roswell.

A man named Harold Dahl reported that he had been visited by a man in a suit who told him to stop talking about his experience. What experience? I’m glad you asked.

On June 21, Dahl and another man, Fred Crisman, allegedly saw round crafts hovering in the sky over Puget Sound. One appeared to be in distress, as it was dropping metal pieces into the water and onto the men’s boat. 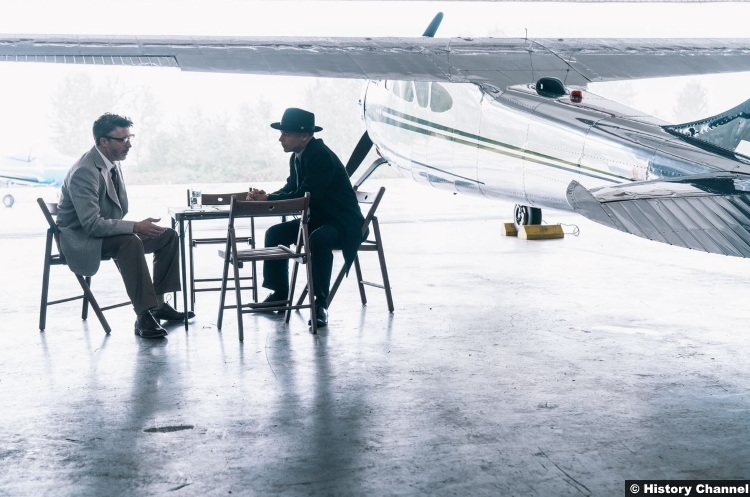 This incident was investigated by both the Air Force and the FBI. The Airmen determined that the metal was, in fact, aluminum. Nevertheless, they collected it for further analysis. However, their B-25 crashed before they even got out of Washington state.

The FBI, on the other hand, concluded their investigation by labeling the incident a hoax. They believed that Crisman and Dahl were trying to garner publicity so that they could sell their story to magazines.

I tell this story because it’s the story that Project Blue Book is (re)telling this week. After the conclusion of last week, the Man in the Hat kidnapped Hynek and brought him to his Men in Black hangout. They’re taking Hynek with him to Puget Sound to interview the witness, who’s been renamed Reed (Bradford Tatum*).

Hynek, though, follows their instructions about as well as he does the generals’. By that, I mean that he encourages that witness to run when he gets the chance. The Men in Black had been taking Reed and Hynek to Reed’s boat, so the fisherman could show them where he thinks the other debris drifted.

Reed, by the way, had claimed that nothing had really happened. He tells them that he made up the story as part of an insurance scam to cover some fire damage on his boat. He gets away from the MiBs, though, so they (and Hynek) go out without him.

Two of them go diving, but only one returns. He’s carrying some glowing rocks. Hynek’s never more fully himself than when he’s coming up with a million different rationalizations for the rocks and whatever literally rocked the boat, by the way. 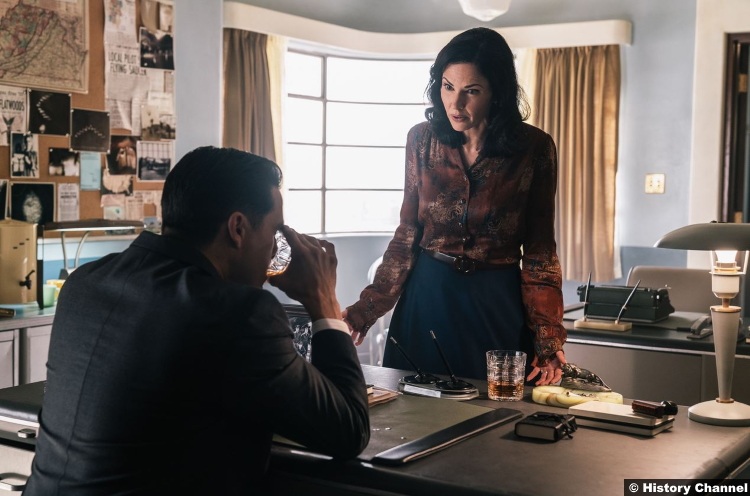 Back home, Mimi, who maybe really should run Project Blue Book, has figured out that something is amiss with her husband. The Man in the Hat had allowed Allen to phone home, and he’d slipped Mimi a coded message. Mimi also manages to narrow down her husband’s location.

So Quinn goes after him, with help from Agent Banks. Banks, as it turns out, has some interesting intel on the Man in the Hat. His name is William, and he was a former test subject (presumably in one of the MK programs). His specialty was remote viewing, or what Papa was having Eleven do in season 1 of Stranger Things. Basically, spying on folks from very afar. William escaped, though, along with the rest of his merry band of MiBs.

Anyway, by the time the men get to Washington, Reed has already contacted the police and reported his attempted abduction. The sheriff and his deputies help Quinn and Banks look for the men. 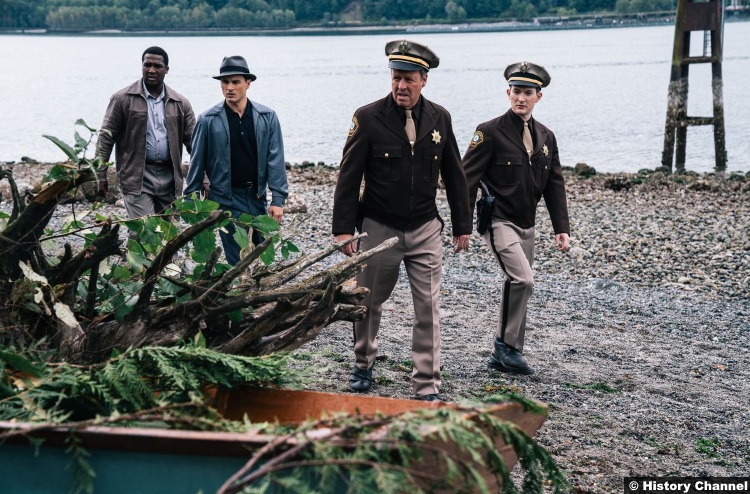 [And on that note: I’d been a little curious to see how or if they would comment on Banks’s race. Granted, not every part of the country was subject to the disgusting Jim Crow laws, but it’s not like it was paradise without them. And while Banks alluded last week to his discomfort at having to walk alone in a rural area, I think this episode really portrayed the atmosphere well. Note how the sheriff brushes off Banks until Quinn announces who they are.]

They find the MiBs and save Hynek, but William gets away. His plane, leaking fuel, later crashes, but there’s no sign of him. And that’s okay for now. Quinn, Hynek, and Banks have a celebratory drink before returning Hynek to his worried wife. And everything’s in clover.

Until it isn’t. The generals have lackeys roll in all of the research material gathered through Projects Sign and Grudge. Project Blue Book is to go through them and essentially prepare a defense. Why? Because the CIA has begun an investigation into Project Blue Book. Well, that’s what you get for making friends with a spy.

8/10 – While this episode was slow to get moving, it picked up once they got to Washington.

* I can’t find the credit for this character, but I think it’s Bradford Tatum.

Note: Most of the time, Aidan Gillen does a great job at masking his real accent. However, although he never dropped his American accent, he kept using the UK pronunciation of Antarctica in this episode. (Hear the difference here.) It was a little jarring.