Doctor Who S12E08 Review: The Haunting of Villa Diodati – Cybermen and Gothic horror

Just when you’re forgetting that Lord Byron and Mary Shelley were best buds, you get this Doctor Who episode! We start at a “dank and frigid” dinner party held by some aristocrats on Lake Geneva, two of whom turn out to be Byron and Mary Shelley. They coax their fellow partygoers into a reading of scary stories, though the classic Mary would go on to write is unavailable. Instead, they read something about Hildegarde the Death Bride that seems to freak out their friends just as much. 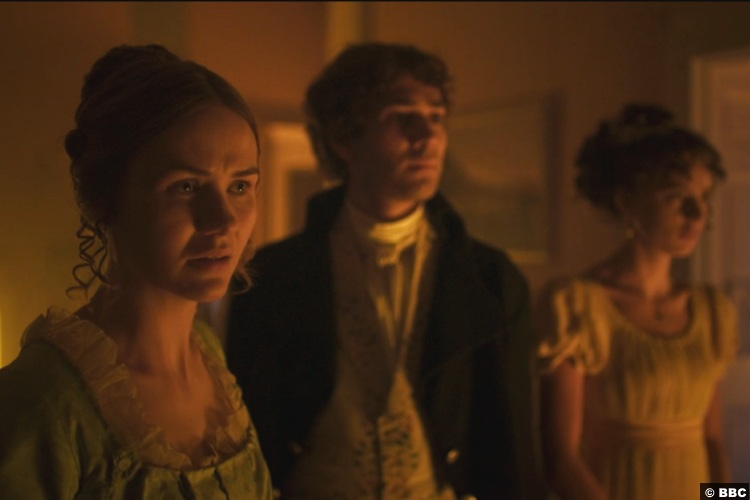 Meanwhile, Doctor Polidori, a guest who seems to have some pretty extreme insomnia, picks a fight with Ryan. But before they can get into it, a spiderlike monster jumps out and attacks Ryan instead. Turns out it’s a skeletal hand, and Byron admits to having a skeleton in his chambers that might just be where it came from. After they investigate a couple of weird curios in Byron’s office that might have caused the haunting, they decide to go off and find Mary’s husband, Percy Bysshe Shelley. However, they find it hard to leave the house because it seems to be re-spawning them inside whenever they get close to an exit. 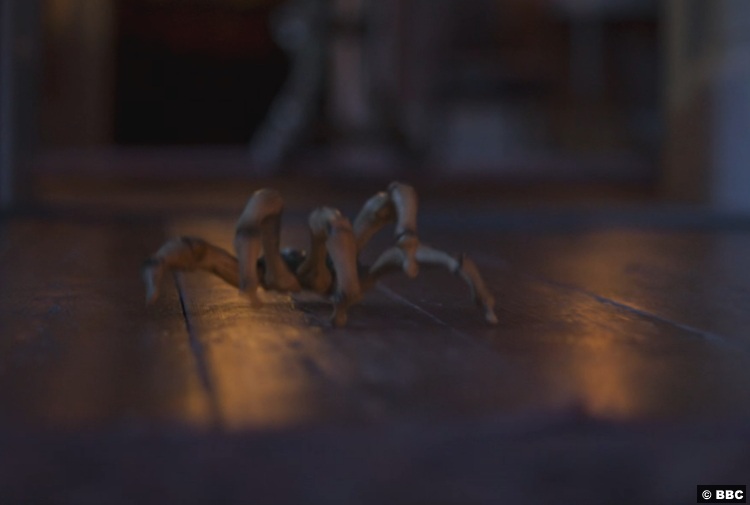 Graeme not only is having the same problem, but he’s also seeing a mother and her child who appear to no longer be with us. Polidori has also started phasing through walls all over the mansion, prompting Byron to shout “Begone, demon!” in a pleasingly old-timey way. After the Doctor points her screwdriver at Polidori a few times, she realizes that they’re unable to leave the manor because their perception is being tricked. The house has supernaturally locked down because…why?

Before they figure out why there’s a security system on this house, they notice a Cyberman heading toward the house, illuminated only by lighting–one of the coolest shots of the show. But what does it want? It appears this is the lone Cyberman Jack Harkness warned the Doctor about, though… And why is it reciting Percy Bysshe Shelley’s poetry? 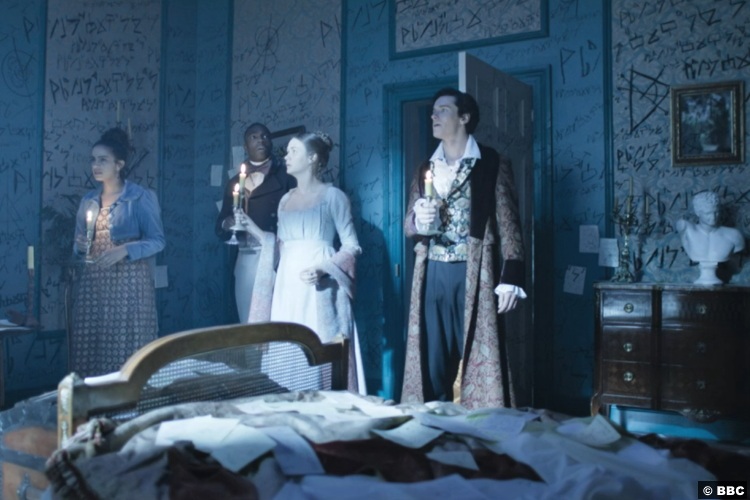 First off, the half-finished look of this Cyberman was just as gruesome as any Mary Shelley. And the idea of the Cybermen planting the seed of their whole empire in a famous poet’s head is a plotine that’s imaginative even for Doctor Who. I’m also a sucker for the Jane Austen style aesthetic in this episode–I’m basically like Graeme in the beginning. Speaking of Graeme, pretty wild that Graeme was the only one to see real ghosts this episode! Maybe it says something about him, or maybe it says something about the ghosts. 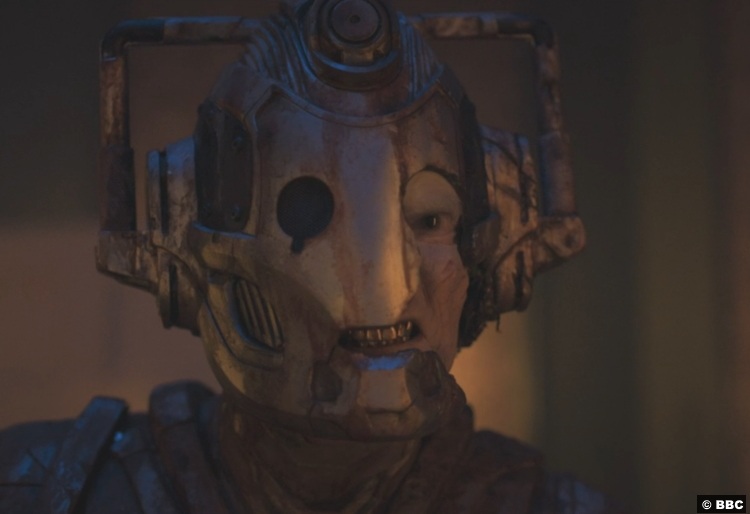 A fairly throwaway line had some pretty freaky implications in this episode–the Doctor got the Cyberium out of his mind by pushing his time-stream forward to his death to make it think he was dead. Maybe the reason why so much of Shelley’s poetry is so sad is because he went through some serious trauma halfway through his career! I also thought Byron got some, ahem, poetic justice when he drove away his paramour. Poor Miss Claremont deserved better than history’s most notorious rake. Now she won’t have to be jealous of the notoriously aromantic Doctor taking up all of his attention. 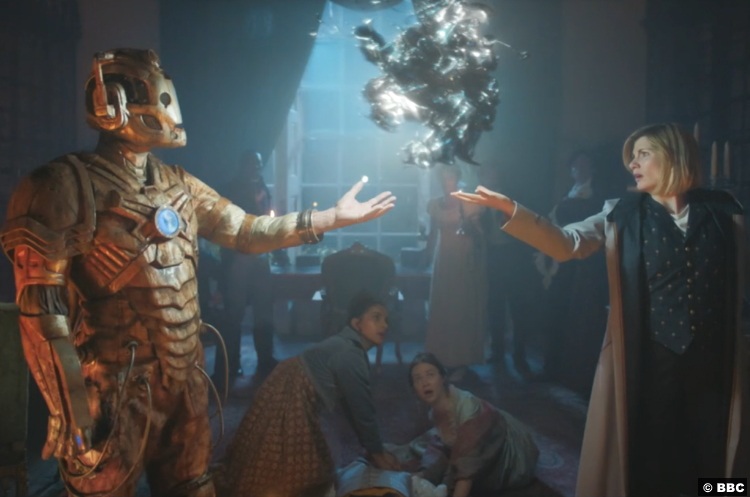 Favorite moments of the episode? Graeme’s”for it is a truth universally acknowledged that when people are out in the rain they need time to dry” had my in stitches. Not to mention Yaz’s warning “nobody snog Byron!” Then the Doctor wins the quote war with “hey, who’s up for writing the most gruesome, spine-chilling ghost story of all time?” Props to Byron for figuring out that the Doctor’s carriage had “disappeared,” by the way. However, he thinks the Doctor is only there because she loves his poetry. I was a fan of the climactic moment where Shelley gets the idea for Frankenstein from that poor unfinished Cyberman’s story.

I also can’t wait to find out more about what’s going on with the Cybermen! Considering this season is getting along toward the finale, I’m pretty excited to know what kind of culmination the writing team has in store for us. Considering the themes in this episode, and from this season in general, we can probably expect something on social issues like climate change, and a throughline about what it means to be human (as opposed to a Cyberman). Since the Cybermen are an empire of robots without feelings who have no qualms about destroying anything they come across, that could mean the Cybermen’s empire was destroyed in the future by something related to climate change on their home planet! Just a thought. We’ll have to see int he coming weeks whether or not I’m right!

9/10 – The only thing cooler than Byron and Mary Shelley helping the Doctor solve a Gothic mystery is the tie-in with the Cybermen. This sci-fi horror story bends genres and minds with its plot twists.