Nancy Drew S01E03 Review: The Curse of the Dark Storm – Nick gets a big surprise

At the beginning of the episode, when we learned that violent storms, like the one about to batter Horseshoe Bay, can deliver spirits, I filed that information away. And then I forgot about it forever, until about an hour ago. 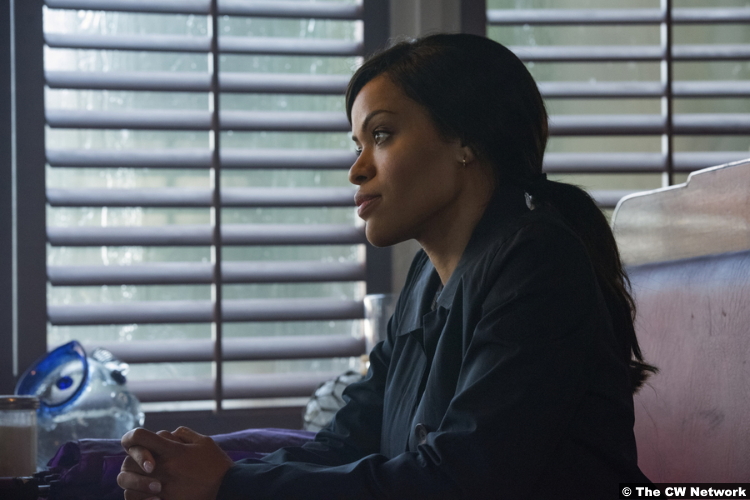 But it’s kind of important because it explains a little about what happens in this episode. We’ll get to that, though. First, MYSTERY. Detective Karen makes Nancy an offer she kinda can’t refuse, since she is facing felony trespassing charges. Unfortunately, the offer hinges on Nancy gathering intel on Nick.

So the bulk of the episode focuses on Nancy digging into Nick’s past. Unlike on some shows, where they’d drag all this out for plot reasons, Nancy just jumps into it. I really appreciate that. This is a story, but these aren’t the parts where I’d appreciate their dragging out the suspense.

To that end, Nancy finds the burner phone and asks about it immediately. No hemming and hawing, no “oh, what should I do?” Just, why were you and the late Tiffany Hudson in communication? It’s refreshing!

But while they don’t stretch the story out over episodes, they do it stretch it out over this episode. So it takes pretty much the whole hour for Nick’s short and sad tale to unfold. Basically, he committed manslaughter. He got in a fight, and in the course of the fight, the other guy died. Tiffany saw part of the fight, but only the end. Nancy’s mom, who was Nick’s social worker, put Tiffany in touch with Nick. They started corresponding, sharing books together.

And it must have been some incredible correspondence. Because after spending the day tracking down Tiffany’s clues, including a Cask of Amontillado-style bricked-up wall, Nick and Nancy find what Tiffany wanted them to find. That is, they find $5 million in bearer bonds. The immediate question that comes to mind is, WHAT?! The next question is, why on earth would Tiffany want Nick to have this money? I get that they developed a good relationship, according to Nick, but still. Still. That is A LOT of money. 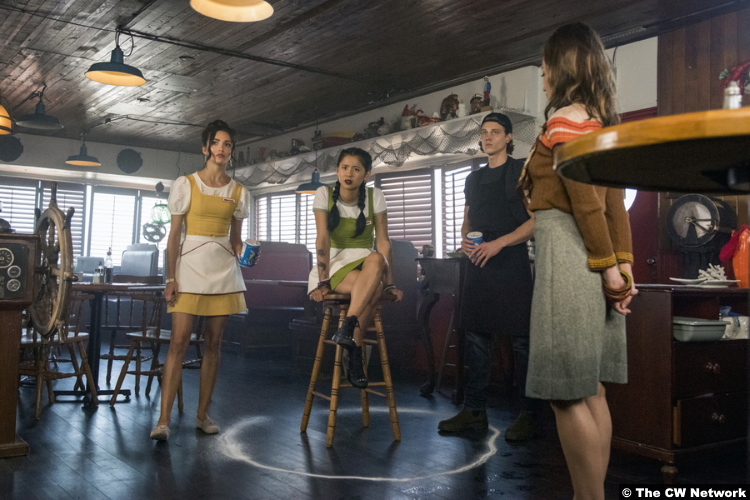 We don’t find out anything else about the money, though, so…back to the ghosts. Carson was able to bail out Nancy last week because Ryan hired him. Ryan comes over to the Drews’ this week, so they can get started hammering out the details of Tiffany’s estate. Ryan, by the way, seems desperate for money. Carson suspects he must owe it to someone. He also suspects Ryan is intoxicated because he becomes increasingly more unhinged. The truth is, though, he keeps seeing Dead Lucy in the Drews’ house. Strange that someone else is seeing her. Even stranger that it’s not Carson. Unless the whole Dead Lucy thing is a Scooby Doo-style plot that Carson’s orchestrated. (Please don’t be this.)

Meanwhile, in the wake of George finding a bucket of blood last week, the Claw staff is on edge. Odd things, like nearly fatal things, keep happening around her. And then a real live ghost shows up.

Rita, the gal in the gray skirt in the picture above, comes into the Claw looking for a job. She slinks around the Claw, saying vaguely unsettling things to George, before vanishing. George later sees a picture of Rita in a news article. It seems that she actually died in a pretty gruesome 1970s boating accident. Ooooh, spooky! (As I realized much later,) she was a storm-delivered ghost!

And then all that’s over, I guess? The weird stuff stops happening, at least. But we still have time for one more weird thing. Having gotten close to Bess, Ace knows about her living situation. Well, he knows she lives in the van, but I don’t know what she’s told him about it. She trusts him enough, though, to let him tell Nancy. She visits Bess and invites her to stay at the Drew house. While she’s waiting for Bess to get her things together, she finds Tiffany’s ring in the van. We knew she had it, but why does she, exactly?

7/10 – Despite the brisk pace of most of this episode, it still felt like they were spinning their wheels. Maybe that’s because a large portion of the episode was just Nick and Nancy talking to each other in closed quarters. It’s fine, but it’s just not that exciting. And that’s okay. They can’t all be nail-biters.