REVIEW: Annabelle Comes Home does things (only) by the book

Annabelle Comes Home is the third in the Annabelle sub-franchise, and the seventh in the overall “Conjuring” series (with another three in development). At this point, it’s almost impossible to be fresh or inventive; I mean how many franchises are seven-movies deep while still reinventing the wheel? Other than the Fast and Furious movies, there aren’t any significant movie series’ even bothering to try something different after a winning formula has been established.

And neither does Annabelle Comes Home. 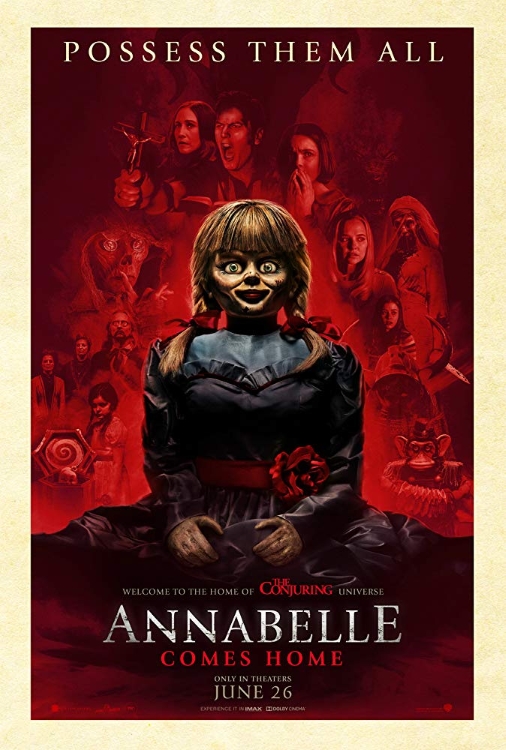 What? Were you expecting me to say “Annabelle Comes Home tries something different”? No, not this series. This series has perfected its formula and knows exactly which buttons to push and how. Considering how all but two of the released movies (not counting this one) have crossed the 300mm mark I’d say WB has every reason to keep plugging away as-is.

For the most part, this is a stable franchise, able to make big money due to small production budgets. The average box office haul might be a third of the average MCU film but the movies are made for pennies compared to big blockbusters (the biggest budget in the series is Conjuring 2‘s 40mm bill, while the first Annabelle only cost six million; the series’ biggest box office disappointment—The Curse of La Llorona—only made 150mm but it only cost 9mm to make); Warner Bros. knows what it has going and is not about to rock the boat. 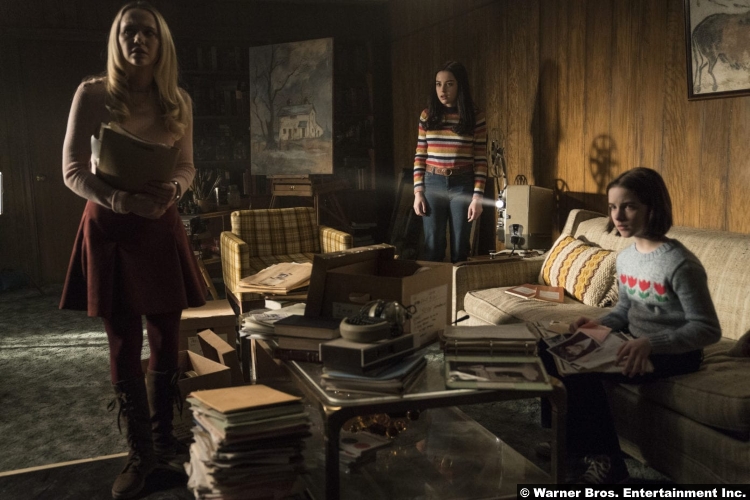 It would be one thing if you were a skeptic or someone convinced that they were just being pranked, but to be a person already a believer and already scared, there’s no reason not to be screaming and/or fighting constantly until the threat is neutralized. And yet in this movie, as in all Conjuring movies, a character’s fight or flight response only ever kicks in as mandated by the plot. Imagine if you were literally locked in a room that was filled to the brim with demonically-connected artifacts, and all at once they start going crazy while the ghost of a dead loved one appears and screams at you. Would you:

A: Scream for a minute and then eventually calm down

B: Scream constantly until the people you know are in the house come to your aid

C: Scream and try to fight the scary ghost/demon thing

What would you do? If you answered B or C, congrats: You are a normal person. You would not be welcome in these movies. These movies are filled with people staring down actual monsters and reacting with slow-motion movements, turning their back on confirmed threats, and creeping needlessly into darkened voids filled with obvious baddies. 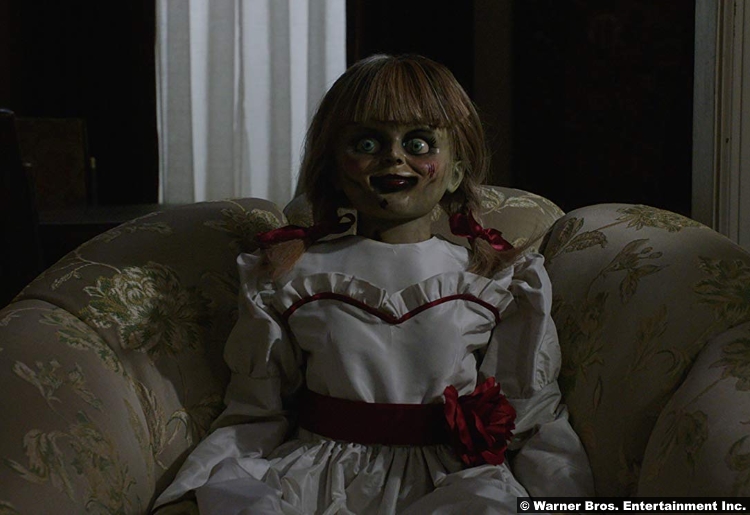 If you’ve watched these movies you already know that almost no one ever dies. I’m racking my brain trying to figure out why Annabelle Comes Home was even rated-R. There’s no excessive gore, language, or anything so terrible to warrant the rating. At one point, someone gets stabbed with a knife, falls to the ground, looks down at the wound only to discover it wasn’t real. That’s the closest thing to a kill this movie has to offer. The monster’s/ghost’s/demon’s only conceivable weapon is to go “boo!” in a variety of “SUDDENLY LOUD NOISES” ways.

And really, that’s the biggest flaw in these movies. The scares are effective to a point, but after a while, they lose any efficacy when you know no one’s going to get got. It starts to become a chore as characters run from monsters that you know either won’t or can’t hurt them. Just once I’d like to see a movie with either a high kill count to establish stakes or at least an explanation for why these monsters never seem able to take out an eight-year-old girl. Just tell me that they don’t want to kill but only want to scare because they feed off the fear or something like that. Tell me anything and I’ll buy it. Just don’t ask me to believe that the murder nun or the killer bride or the…TV that knows the future?…whatever: Don’t ask me to believe those things are actually trying and failing to kill an unarmed teenage babysitter.

EVERY CONJURING MOVIE NEEDS A BALANCE OF THREE KINDS OF SCARES 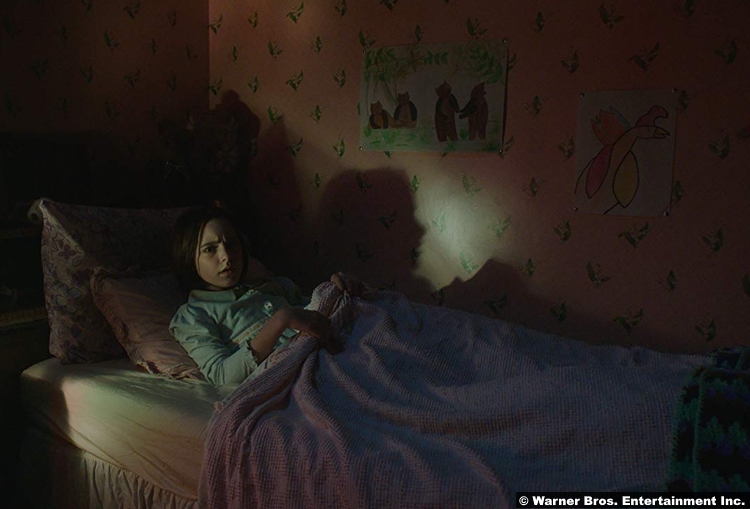 First, there are “Hitchcock Scares.” These are the moments where the tension builds, the music crescendos, the camera pulls in tight, and then…nothing. It’s a head-fake, a red-herring, a “gotcha” to make the audience chuckle at themselves and get comfortable (softened up and ready for the real scare in a minute). A character holds a map up against the car window, the camera pulls in closer and closer; you know she’s going to lower the map and reveal a monster staring back at her. She finally whips the map down and…nothing. Gotcha.

Second, there are “Jump Scares.” These are the most maligned forms of fright. A door suddenly SLAMS shut. You jump, you scream, you grab the arm of the stranger next to you. A character opens a door very dramatically and there’s nothing there, whew, but then she turns around and “AHH! KILLER BRIDE! STABBY STABBY!” That’s a jump scare. It offers nothing beyond the instant reaction; it conjures up a response that leaves as quickly as it came.

Finally, there are a brand of scary moments that I coined back in 2015’s Insidious 3 review: “Window Scares.“ These are those times when something the character walks past suddenly moves, so subtly and out of the camera’s focus that you might not even notice it. Someone in the theater will, however, and invariably they’ll point at the screen, drawing everyone else’s eye to it. Eventually, everyone in the theater is scared for the character, who has no idea they’re being stalked. These are the scares that define the modern horror movie and they’re the reason why I spend most of my time staring at the backgrounds of shots and not at the character in the center of the frame.

There’s a fourth kind of scare that these movies don’t touch on, and that’s the long-term “Lingering Scares” that movies like The Exorcist or Hereditary specialize in. You won’t find that here. This is much more of a popcorn horror movie.

EVERY CONJURING MOVIE NEEDS A SEMBLANCE OF PLAUSIBILITY 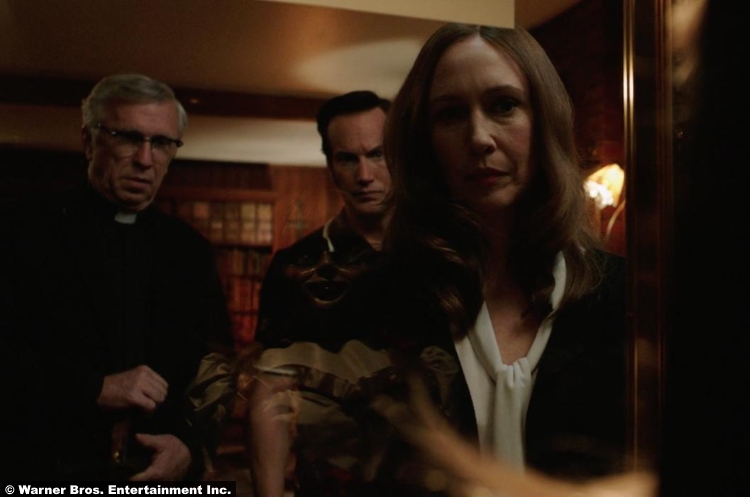 It wouldn’t be a Conjuring movie if the script didn’t try to convince you that all this is based on true stories. Line after line of “I read this in the Warren’s case files…” are given solely to plant the seed in your mind that what you’re seeing isn’t just the figment of a writer’s imagination (spoiler alert: It is). 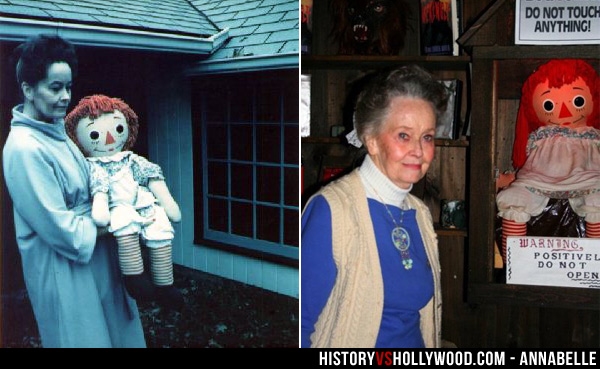 Ultimately, Annabelle Comes Home checks every box but it doesn’t do much more than that. Long-time followers of the series are likely to walk away saying “Yep, that was a Conjuring movie” but that’s about it.

6/10 – Inoffensive, but hardly riveting or inventive, Annabelle Comes Home fails to stir up much of anything. Conjuring 3 comes out next year; maybe that will freshen up a very safe franchise.