Your SO OF COURSE preview of WWE SUMMERSLAM 2018

really, really boring. There were a few bright spots; Joe vs Styles was great, even with the non-finish, and Rollins vs Ziggler was great. Miz vs Bryan was good but struggled to live up to the hype (which is fine, because it wasn’t a one-off). Really the show will be remembered more for the moments than the matches. Ronda winning is worth more than Ronda’s match, as is the case with Lynch’s attack on Charlotte. The Miz/Bryan hype video was better than the contest too.

And there was Roman Reigns, who finally defeated Brock Lesnar and won the Universal Title, in a moment that reminded me of this:

But then there was Braun, who teased a cash-in before the match started, just so that the fans would not literally walk out and/or boo the match while it was happening. That is some amazing cognitive dissonance, to send out the more-favored guy to provide a bait-and-switch so the less-favored guy can win without a riot breaking out midway through.

VINCE YOU KNOW THIS IS ALL FAKE, RIGHT? YOU LITERALLY GET TO DECIDE TO WINS AND LOSES! WHY ARE YOU MAKING THIS SO HARD ON YOURSELF?

Anyway, it’s been a month and, but for Nakamura’s descent into obscurity, SmackDown has been pretty great and Raw has been pretty terrible. It’s also September so no one’s watching anyway. We’re having a PPV simply because we gotta.

So let’s have a preview for it for the same reason! THIS is your SO OF COURSE preview of WWE HELL IS WATCHING BRIE BELLA TRY TO WRESTLE 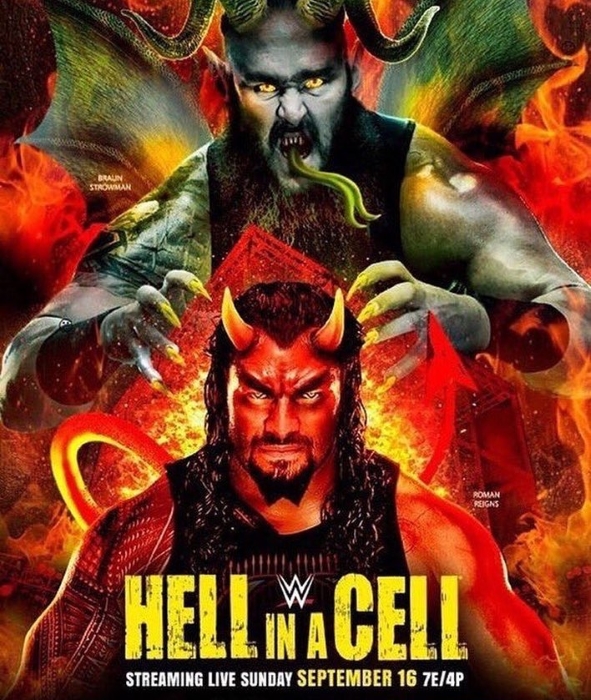 Gosh, what a terrible poster. Let’s get this over with…

What it is: It’s an excuse for Jeff Hardy to do Jeff Hardy things and get very Jeff Hardy injured, all to make Randy Orton look like a million bucks even though he’s pushing forty and has always ever had the charisma of a sloth on Claritin. Meanwhile Jeff Hardy is literally 41 years old but is still doing moves he should have hobbled away from a decade ago.

What should happen: How about go back in time and NOT make this a Hell in a Cell match. It only is because people want to see Jeff allllmost die. Why not give the Cell match to Lynch vs Flair, which seems much more deserving of it? Whatever. This has all the makings of Jeff looking “good” but ultimately losing, a classic 50/50 booking.

THE NEW DAY vs RUSEV DAY

What it is: It’s The New Day as Tag champs…again. They’ve done a lot to stay fresh over the years but they’re still being booked the same. The same feuds, the same beats to the story, the same everything. Right now it’s Rusev Day, next month maybe The Bar.  The opponents keep rotating in and out but nothing really changes and nothing will until they start getting booked in a different way.

What should happen: How about the team drop the belts suddenly, have a few months of teasing a break-up, not break up, then go on a singles run where they Freebird a title. Anything for a change of pace.

THE BRYANS vs THE MIZES

What it is: It’s last month’s match, but with Divas from a bygone era dragging it down.

What should happen: How about not asking a couple “comebacks” from the John Laurenitis era of talent-relations to work the match?

What it is: It’s last month’s match, hopefully with less stalling.

What should happen: How about a classic “Ronda wins in 10 seconds” finish. That’s what I wanted last month, but they wanted to do the drawn out “build heat” sort of finish. There’s a time and place for that, but there’s also a time for a “Goldberg beats La Parka in thirty seconds” sort of finish too. The latter really gets the crowd hot, and the only expense is the ego of the loser.

What it is: It’s the Shield, minus Roman Reigns (unless you count his steroids, which Dean probably is counting on quite a bit), and it’s Dolph—will he or won’t he retire already—Ziggler and Drew—will he or won’t he flop again as a main-eventer—McIntyre.

What should happen: How about just pull the trigger on Dean’s heel turn. It’s a bit cliched but it would give them both something to do in the singles division. Dean works better as a heel anyway and Seth was this close to being the hottest babyface on the roster (if not already there) before he had to reform the old band in order to make Roman cool. I couldn’t care less about Drew or Dolph, but that’s just me. Dolph hasn’t been really great since the night after Mania 2013 and Drew is just a perfect specimen of a man while also somehow being less charismatic than Randy Orton.

What it is: It’s my second-most anticipated match of the night. After a spring of dull nothingburgers with Nakamura, AJ Styles has finally found his Yang. Joe has been so consistently great everywhere he’s been (ROH, TNA, NXT, WWE) it’s impossible not to root for him outside of kayfabe. He’s been so consistently great in character it’s impossible not to want to see him get punched in his bully’s mouth and put in his place. That shouldn’t happen though…

What should happen: How about Samoa Joe does what’s never been done before and becomes the first wrestler to hold a world title for the three biggest North American wrestling companies of the day. Much as I love AJ Styles and would love also to see him hold and hold and hold the WWE title, breaking Lesnar’s record, that just doesn’t seem practical or likely. Joe has more than earned this. Give it to him.

What it is: It’s the match I most want to see. Lynch has been outstanding as a Stone Cold like anti-hero, unconcerned with boos or cheers (thus getting cheers) and going all third-act Braveheart on a mission of revenge. It’s been glorious. Charlotte has done her part but has been hampered by the company trying to keep her sympathetic despite her actions obviously being gutless.

What should happen: How about Becky wins? Why is that so crazy an idea? She was, after all, the first Smackdown Women’s Champ. There’s literally nothing that should be holding her back. She’s great in the ring, great on the mic, beautiful, fierce, charismatic, popular. What’s the problem?

What it is: It’s a Money in the Bank Cash-In, Hell in a Cell match, with Mick Foley as special guest ref. Is there anything else we can add to try and entice people to be interested? No? Okay. Also this match doesn’t need Foley or the Cell. Give the Cell to AJ vs Joe, a feud that has real hatred behind it.

What should happen: How about not throwing away all that’s been built (organically, slowly, effectively) to turn Braun Strowman from a green, sloppy, overgrown rosebud into arguably the most popular singles performer working on the main-roster…how about not doing throwing that away? Let’s not sacrifice him on the altar of Roman Reigns. I already lived through 2005-2006 and the parade of popular Attitude Era stars that all “laid down for the three second tan (brrrrappledough).” I’m too old and bitter to go through it again with a far less capable model.