Legend has it that Jim Cornette came up with the idea and now, fifteen years later, the match is still a spectacle, but fears were drawn when a PPV devoted to “Satan’s Structure” was introduced.

The main problem was that before the Hell in a Cell PPV 2009, the match was a feud ender, a place where two men went to finally decide who was the better man. But not any more; now it’s just an event where a spot needs to be filled and the match is just another bout in a feud. Add in the PG-era that we’re currently a part of and you can see why the Hell in a Cell feels redundant.

In 2012, it was up to the longest-reigning champion of the modern era, CM Punk, and the undefeated beast that is Ryback to prove that theory wrong? 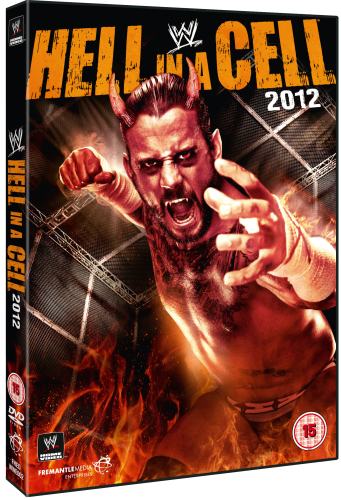 As I said when reviewing HiaC 2011, the argument that the Hell in a Cell match should never be a gimmick that is slotted into a feud just because it’s October needs to be put to one side as it’s been done to death and while I feel it should be the culmination of a rivalry so intense there’s no other way to resolve it, the show is here to stay and we just have to make the best of it. At least this year there was only one match inside the cage.

The opening match featured Randy Orton taking on Alberto Del Rio in the definition of a filler bout. There was a bit of a rivalry coming in, but nothing anyone cared about, so the match would live and die by the efforts between the ropes.

In that regard, they didn’t disappoint and put forth a commendable effort (Del Rio’s botch from the top excluded) with a fantastically worked finish to give the show a great start.

The next three matches were all for title belts and all had a feud of some kind coming in. Up first was Team Rhodes Scholars trying to take the tag-titles from the uber-popular tandem known as Team Hell No. The match was pretty good and both teams came out stronger than they went in, with the finish preserving both teams’ standing.

Following that, Kofi Kingston defended his IC Championship against the man he defeated for the belt, The Miz in a well-worked encounter with fantastic leg work by Miz and great selling from Kofi. Personally, I feel that the wrong guy won, but that might be just me.

The third title bout in a row was indy-sensation-turned-big-time-player Antonio Cesaro putting his US Title on the line against Justin Gabriel, with the South African coming into the PPV with momentum as he had pinned Cesaro cleanly only a few days prior.

WWE have a knack of putting over moves as deadly when they want to and with the current US Champ, the Very European Uppercut and The Neutraliser are bona-fide game changers. This match was no different and the Swiss native goes from strength to strength.

Breaking up the bouts for gold, Rey & Sin Cara v PTP was a bit of a let down and as with the IC match, I feel the wrong team won. However, seeing Sin Cara knock himself out was pretty damn funny.

What wasn’t a let down was Sheamus v Big Show. It was fair to say that very few people had great expectations coming into this fight, but for the love of God they went out there and brutalised each other for 20mins in a stunning brawl. JBL and JR’s commentary really came into its own here and added to an already fantastic match.

A very easy match of the night award to the Irishman and the giant. The sight of Big Show being hit by White Noise will never get old.

Following a MotN is never going to be easy, but WWE usually book either the women or a comedy spot here to allow the fans to unwind before the main event. In this case, the Divas Championship was on the line as the dastardly Eve defended against Layla (who she won the belt from) and Kaitlyn (who Eve stole the title shot from).

As per the norm, they weren’t given enough time to really shine, but they did do enough in those 6mins to warrant their place on the card.

All of this was, of course, a pre-cursor to the Hell in a Cell main event. Now this match had the internet buzzing with how WWE were going to get themselves out of the corner they had painted themselves into. Ryback was on an undefeated streak and CM Punk was on a run as champion that was closing in on a full year (and would be a full year at Survivor Series), so would WWE halt the Ryback push or give the dominant monster the title at the expense of CM Punk’s lengthy reign?

WWE, to their eternal credit, booked Ryback as the monster he is as the Sin City Destroyer basically owned CM Punk from beginning to end. The actual finish did no harm to Ryback, kept the belt on Punk and allowed everyone to move forward without losing any lustre.

The closing moment of the PPV also let the world know that WWE see Ryback as a future headliner and possible WWE Champion as CM Punk felt the full force of Shellshock on top of the Cell.

One interview that is as much a piece of fluff as you would expect.

This PPV delivered, with the show-long story of Punk / Heyman trying to get the main-event cancelled giving an extra zing to the usual backstage segments.

There wasn’t a duff match on the card, although some didn’t get the time to really show what they can do. That being said, the World Heavyweight Championship Match and the Hell in a Cell were the two main bouts coming into the show and they both delivered in their own way.

Also, if you buy the Blu-Ray edition, you get the following  -: