Your SO OF COURSE preview of WWE SUMMERSLAM 2018

LAST TIME ON SO OF COURSE, it was EXTREME RULES, the one(?) night a year where WWE gets EXTREME(LY PG). If you can remember, let’s say three people who won matches I’ll buy you a bottle of delicious Cherry Diet Dr. Pepper. Is that too hard? Can you name even three matches that took place? I sneaked a peek and saw Kane and Daniel Bryan tag-teamed in a match I had completely forgotten about until this exact moment. 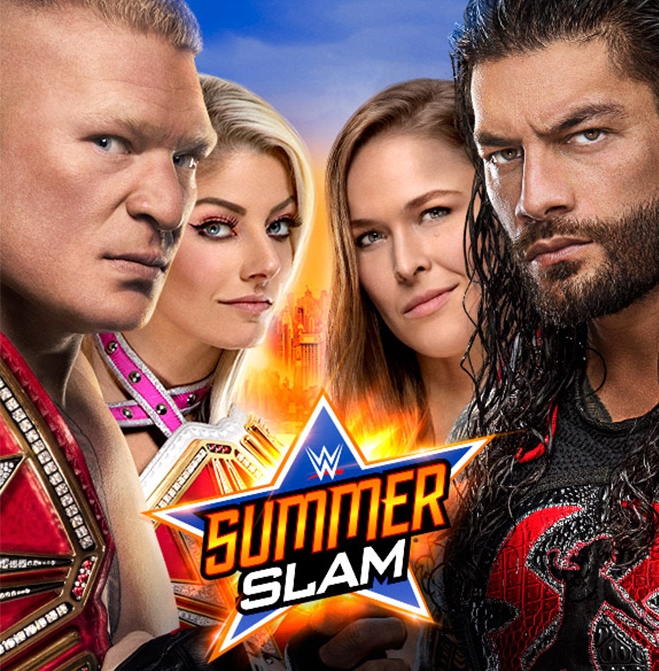 To be fair, this is a pretty stacked card. I’m actually very interested to see how Vince manages to screw it up.

THE BLUDGEON BROS.(c) vs NEW DAY

New Day won a very fun little (and I mean little as in too short and rushed and why does Vince hate tournaments, they’re so much fun) tournament to challenge for the Tag Titles. The Bludgeon Bros. are still the champs, having dominated in five-minute squash matches for the better part of the last five months.

That’s it really. That’s the extent of the feud. That and pancakes. So, with so little momentum going in, it seems foolhardy to just switch the titles, especially away from a championship team that has held the belts since WrestleMania. These things are supposed to mean something, right?

This is a feud that is happening.

Randy Orton is not booked for the show, but I’ll be shocked if he doesn’t make an appearance, even with the recent allegations (and subsequent company investigation) against him. Either way, I’d expect Jeff Hardy to lose on his way to taking some time off to heal up. It’s the easiest booking to do and that’s okay because easy is often right.

Becky has been killing herself, working great matches with little “creative” help from the back, and all the while has remained one of the most popular women on the show (either show). She finally got rewarded for her work with a title shot at SummerSlam. Good for—

The Money in the Bank contract will be defended for the first time since…I wanna say that ladder match between Dolph Ziggler and John Cena? It doesn’t happen often so this should be interesting. The cynic in me says the contract being on the line means nothing and was only done because these two already had a match and the only thing WWE loves more than a rematch is a rematch with a tacked-on stipulation to make the rematch feel “fresh.”

I’d expect Braun to retain the case, and my hope is we see Lesnar retain and Strowman cash-in on him as the show wraps up.

Ziggler hasn’t been this relevant since the night after WrestleMania 29 drew to a close. He’s doing great work with the Intercontinental Title, is cutting fiery promos and is putting on excellent matches with guys like Seth Rollins. It helps that Seth Rollins is Seth Rollins, of course, but hey, a win’s a win.

The return of a very jacked-up Dean Ambrose probably means we get a Seth win here, a heel team win next month and maybe a Dolph win-back in October. That would give Seth the chance to slide into the main-event (where he really needs to be) and would set Dolph (or Drew McIntyre, if Dolph decides to leave the company) up with Dean Ambrose to feud with for the next few months. Easy peasy.

Rousey is in a quirky spot on the roster. She’s extremely popular but also very green, so pushing her makes sense but also runs the risk of exposing her. She’s also a huge crossover star, which is needed since Brock Lesnar may not be around as much as he has been (pffft), but on the other hand, there are rumors she may take time off herself after WrestleMania, in order to have a baby. In that case, WWE needs to strike while the iron is hot.

I say, put the title on her, ride her to Mania, drop the belt to Charlotte (or, even better in my opinion, have her win at Mania, then lose to Shayna Baszler on the Raw-after show) and then take a year off before coming back (if she wants, who knows). Either way, Alexa’s time has run its course. Rousey ought to win.

DANIEL BRYAN vs THE MIZ

{insert all your hopes and dreams here}

AJ recently reached a milestone, holding the WWE Title longer than anyone else in the history of Smackdown. He beat JBL’s record (thankfully, so now we no longer have to hear him talk about it) after reaching 281 days with the strap. He’s taken on the likes of John Cena, Dean Ambrose, Shinsuke Nakamura and more, and has cemented himself as a legit company carrier.

Now it’s Joe’s time. Much as I would love to see Styles carry the title to WrestleMania (breaking Lesnar’s recent title reign length), I think putting the belt on Joe is too obvious a call to screw up. He’s hot, viscous, gets legit heel heat, and has a plethora of babyface challengers to take on for the next several months. Don’t overthink it, Vince.

Actually, that’s a pretty good idea. You can build it up to WrestleMan—

Best case scenario for me—and I’m speaking strictly on an “I want to watch the world burn” level—would be for Roman to hit three spears in a row, go for the pin, Brock kicks out at two, then hits a third F5 to retain the title. Easy peasy, clean and crazy.

It would be unpredictable for sure, since everyone and their brother at least thinks Roman Reigns wins. He might get cashed-in on immediately after (which has happened way too much at SummerSlam to have any impact, and it’s already happened to Roman himself, too), but he’s certainly going to win the belt for at least a minute.