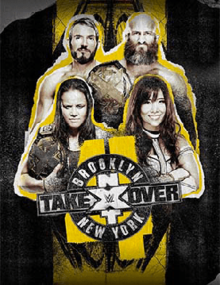 For the fourth year in a row, NXT would invade Brooklyn on the eve of SummerSlam as NXT TakeOver: Brooklyn 4 came to you, live on the WWE Network, from the Barclays Center in Brooklyn, NY. Headlined by a Last Man Standing Match for the NXT Championship between new champion Tommaso Ciampa and his former friend turned bitter rival Johnny Gargano, NXT TakeOver: Brooklyn 4 would also feature Adam Cole (c) defending the NXT North American Championship against the high-flying Ricochet, EC3 going one-on-one with Velveteen Dream, Moustache Mountain receiving their rematch for the NXT Tag Team Titles against The Undisputed Era’s Kyle O’Reilly & Roderick Strong (c), and Kairi Sane challenging Shayna Baszler (c) for the NXT Women’s Championship in a rematch from the Finals of last year’s Mae Young Classic.

After the NXT Tag Team Title match, The War Raiders would ambush The Undisputed Era with a double team powerslam to Kyle O’Reilly before Hanson dives to the outside to take out Roderick Strong. Back on the inside, Hanson & Rowe would hit O’Reilly with their tag team finisher.

Prior to the NXT North American Title match, NXT’s newest signee Matt Riddle was shown in the front row at ringside.

What did you think of NXT TakeOver: Brooklyn 4? Post your comments in the box below.