REVIEW : The Strangers: Prey at Night is equally boring and bewildering

A decade ago, a small-budget horror film called The Strangers was released to middling reviews but solid box office success. On just a nine-million dollar budget, the movie—despite a May release (wedged in between mammoth movies like Iron Man before it and The Dark Knight after)—found an audience and scored a box office haul ten times that amount.

Unlike most horror movies of the modern era, this one lacked a supernatural element (sort of*), focusing instead on a basic “home invasion” premise. No aliens, no demons, no ghosts or possessions; just an isolated house and some murderous pranksters in creepy masks…

Without a supernatural angle to the story you might wonder what the “hook” is, but in the case of The Strangers, the hook is that there is no hook. The movie’s most memorable line, which is spoiled in the above trailer, features the lead character asking “why are you doing this?!” A demon terrorizes a family to feed off their terror (or something like that). A ghost haunts a house because it’s a connection to its past life being disturbed. Aliens probe our butts because everyone in outer-space has an anal fetish. But the “monsters” in The Strangers answer the “why” question with an eerie “Because you were home.”

That’s it. Random violence for the sake of it.

Even in the 1980’s slashers of old there was a nuanced motivation. Freddy Krueger killed kids because he was a pedo-murderer taking vengeance on the parents that burned him to death. In Friday the 13th, Jason(‘s mother *spoilers*) murders the sexing/partying counselors in vengeance for the negligence that led to her son’s “death” long before. Those are clear motivations that give depth to their stories. In The Strangers it’s just arbitrary evil. In many ways that’s far worse than a nut in a hockey mask.

Was the movie perfect? No, it was effective. It’s horrific sequences were-well executed and made up for the one big problem that plagued the movie: *The seemingly-ordinary people are able to teleport around the house and surrounding area, entirely at the convenience of the moment. If it made for an effective jump-scare or, even better, a suspenseful build-up to a bait-and-switch disappearance, then the perps would simply vanish, despite no logical or natural way for it to happen. It’s a cheat, and ordinarily would be a damning one, but as said: The movie is effective enough with its scares and mood that it gets a pass. 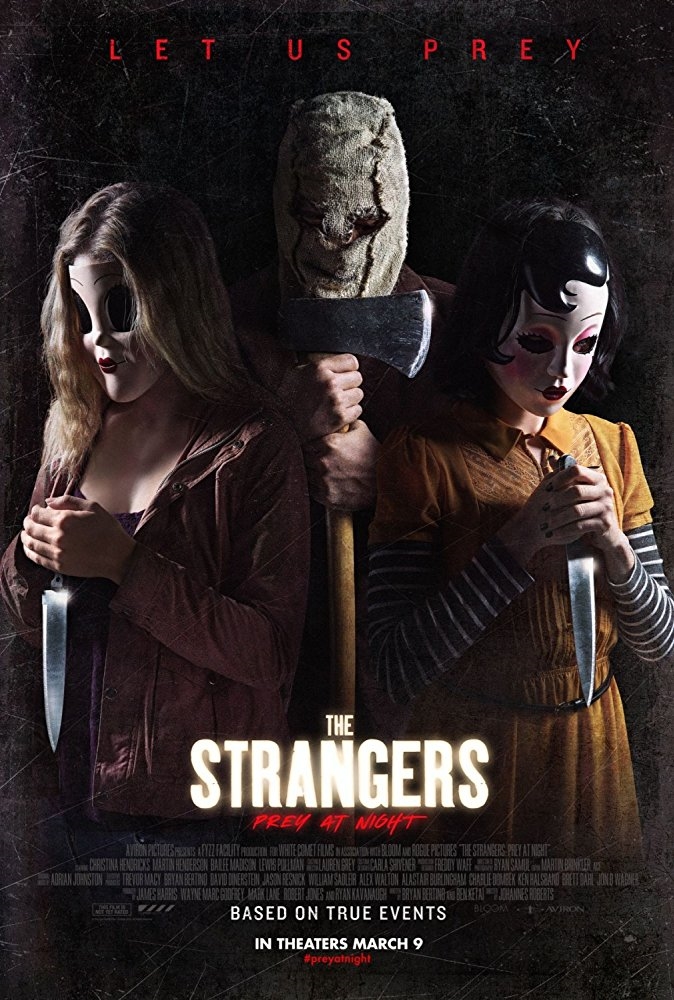 Now, ten years later, we get the follow-up.  Original writer/director Brian Bertino is out and the direction of the sequel falls to Johannes Roberts, a British filmmaker with a few horror movies to his name, but no big hits as of yet (last year’s 47 Meters Down was a modest success). Does The Strangers: Prey At Night live up to the moody success of the first? Does it make its antagonists a little more grounded or do they still “fast travel” from place to place like characters in a video game? With so many big movies out or soon to be, is this one worth your time?

The single biggest problem with the movie, which is also the biggest problem you can have in a movie, especially a horror/thriller, is that it is boring. For one hour and fifteen minutes, there were literally three and a half minutes where I was thoroughly engaged, thirty-seconds of which even made say “ooh!” in the mostly-empty theater. So good job for that half-minute.

The rest of the time was a big no.

There are other problems to note, including a screenplay with absolutely no depth, nuance, interesting characters, clever moments or themes being explored. It’s all surface level with a surface that is flat and predictable. In fact there were a couple moments where, had a simple and easily-accomplished twist been done (a simple “he/she was in on it the whole time!”), it might have been enough to redeem the other weak moments. But no twist comes. Everything you expect to happen, happens, and nothing else. 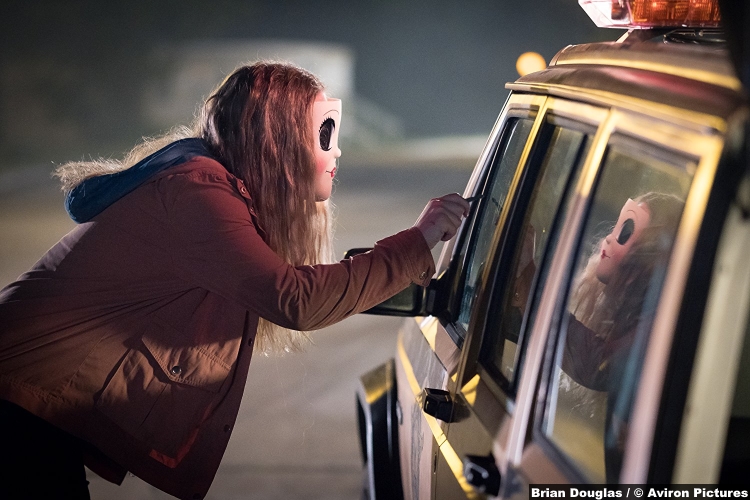 Does it solve the original’s annoying “teleporting” villain-problem? Yes. You’ll be happy to know there is a logical flow to all the movements of the baddies. In its place, however, is a whole new problem. In the original the fact that the murders happened “because you were home” was effectively handled; “no motivation” can very easily jump the shark if the villain starts suffering a beating and turns into Jason Voorhees, still inching forward desperate for the kill. That works with Jason; he’s supernatural. With the “strangers” it doesn’t work because they are supposed to be normal (albeit sadistic) people. 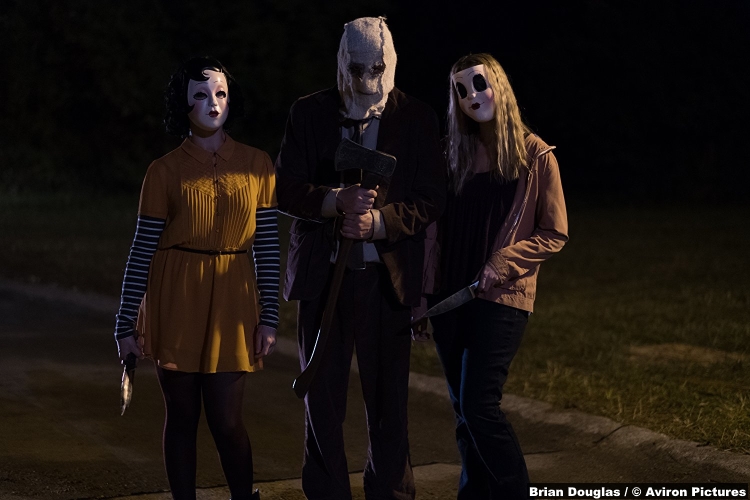 It’s one thing for them to say to themselves “let’s go kill some people for fun” but once they start hitting you back, how much abuse will a person take “for fun” and how willing to die is someone going to be for nothing? In the original movie this was not a problem. In the sequel it is. By the end of it, when both heroes and villains are bloody and limping, I struggled to understand why the bad guys continued doing what they were doing.

And when you’re watching a horror movie, the last thing you want to do is simultaneously not care, and wonder why the villains even do. 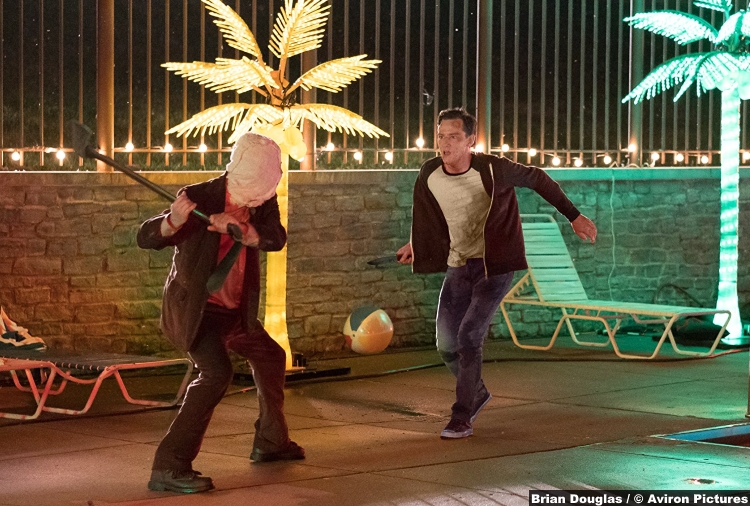 4/10 – When it was over, it was mercifully so. Few things were outright terrible, but even fewer things worked in any recommendable way.