Your SO OF COURSE preview of WWE Survivor Series 2017

Last time on SO OF COURSE…THE PLAGUE! WWE held their annual TLC show, with a much-hyped match between The Shield and The Dungeon of Doom 2.0 as well as a “much hyped” match between Finn Balor and Bray Wyatt. Instead the mumps happened, Vince and co. scrambled to fill out their card in the wake of several superstars dropping like flies, and we somehow ended up getting AJ Styles vs Finn Balor and Kurt Angle wrestling in riot gear.

It was wonderful fever dream. 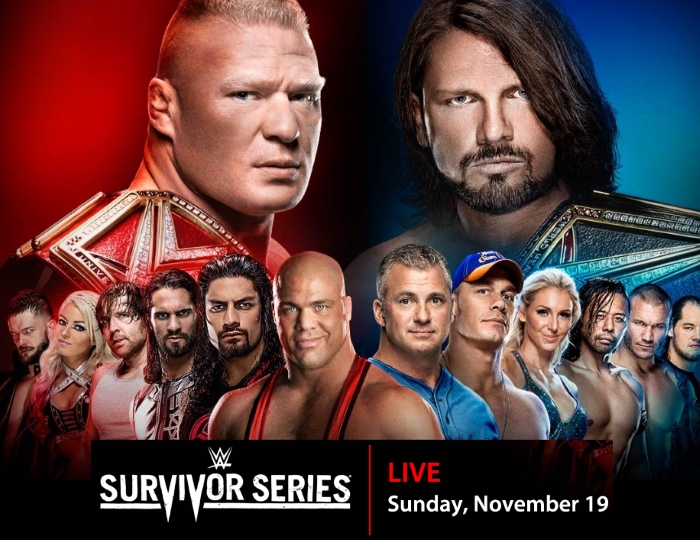 We’ve talked about this already. Cliff’s Notes for those who haven’t read the article: The annual November show doesn’t matter anymore since the focus—in this brand-split era—has shifted entirely to Raw vs Smackdown matches that exist outside the normal storyline worlds of Raw and Smackdown. Survivor Series 2017 is essentially a non-canon supercard, where every match is a cool “random superstar vs random superstar” fight, but since no one will see their opponents face to face again until at least the Royal Rumble, the results of the matches matter none at all. WWE can talk about “fighting for brand supremacy” all they want, but no one cares about that because everyone wrestling is part of the same family; they just happen to appear on different shows. It’s not the Super Bowl; it’s the Pro Bowl.

That said, the card is pretty stacked. It may not matter come Monday morning, but it’s going to be wild on Sunday night. Let’s break down the card and examine all the ways Vince McMahon can screw it up. Consider this your SO OF COURSE preview of WWE Survivor

WHAT IS IT: Intercontinental Champion The Miz is taking on United States Champion Baron Corbin.

IS IT SPICY: Ooh baby, watch this and tell me it aint:

WHAT SHOULD HAPPEN: Miz should skunk him.

IS IT SPICY: Eh, it features four really great wrestlers, a couple average wrestlers, one mystery wrestler, and a trio that knows how to do one or two things and get out of the way. So the action should be consistently good and the ladies always try to go above and beyond whenever they’re given a spotlight match like this. There’s no real storyline spice to note, but it should be a fun fifteen minute match.

WHAT SHOULD HAPPEN: There are only two things to take note of in this match: The first is who the mystery partner will be. The boring answer is Natalya, since she lost the women’s title on the go-home Smackdown show and now has no place on the PPV. The slightly-less boring answer is Paige, who seems poised to return, although she had been a Raw superstar. I don’t think anyone remembers or even cares though, so she can easily show up to team blue, work the match and show up on Raw the next night without anyone even noticing. The other big story is Asuka. The still-fresh call-up has an entire character built around how unstoppable she is. There’s no single match in WWE history that is better used to get over a performer’s dominance than a Survivor Series Elimination Match. Having Asuka single-handedly eliminate the entire Smackdown team might not be the most exciting thing in the world…but nah it totally would be. She should win it all by her self.

IS IT SPICY: Nah, but it has potential to be quietly great. This is a weird matchup that likely never would have been booked if not for the champion vs champion stipulation. It’s an odd class of personalities and styles. Nevertheless, the Usos can go it the ring, Sheamus is underrated, and everyone knows what Cesaro can do. We’re probably not going to talk about this one on Monday morning, and it probably won’t get much more than ten minutes or so, but it will likely entertain for every minute it’s happening.

WHAT SHOULD HAPPEN: I mean, the Usos are an actual tag team. No matter what you tell me I will never see Cesaro and Sheamus as anything more than a couple of solo guys teaming up because creative has nothing for them. Therefore by all reasonable and logical thought process, I must say the Usos should win. A true tag team should regularly beat a makeshift one.

WHAT IS IT: It’s The (recently -reformed) Shield taking on The (perpetually-formed) New Day.

IS IT SPICY: Sure is! It’s the hottest trio of three years ago taking on the hottest trio of today. It’s some really good wrestlers with a lot of fan support wrestling each other. That is always a recipe for a hot match. But forget all that; this match is spicy for no other reason than the fact that New Day is finally calling out The Shield for their unfair use of body armor…

Suffering succotash! We, The New Day, accept the Shield’s challenge at Survivor Series but request that all shock-absorbing body armor including (but not limited to) protective vests, shoulder pads, and heavy wool sweaters be disallowed for competitive use.

Think it’s a game?!?!? Don’t say a word when I come padded up like the Michelin Man.

WHAT SHOULD HAPPEN: Big E should come out dressed like the Michelin Man, duh.  To be honest I have no idea how this match is going to go. I mean, I know how it’s going to end (with The Shield winning), but will this match be a comedy match where Shield is brought over to New Day’s style, or will it be a fast and furious, more intense kind of match, bringing New Day over to The Shield’s style? It might end up an odd blend, where New Day keeps trying to have fun but The Shield just keeps acting all straight-faced and Shieldy. I have no idea, but I know the crowd will be hot and the wrestlers will elevate the “sports entertainment” to a great twenty minute fight.

IS IT SPICY: Only if you think Alexa getting ragdolled for six minutes is spicy.

WHAT SHOULD HAPPEN: Alexa should not get ragdolled for six minutes. She should use her smaller size and athleticism to play cat and mouse with the longer, lankier Charlotte creating a match where you think she might actually steal in a win. Instead, Charlotte will secure a hard fart victory, walk up the ramp only to hear Also Sprach Zarathustra. She’ll smile, maybe even shed a tear but instead of her dad it’s CARMELLA FROM BEHIND, WHAM, CASH-IN, 1-2-3, NEW CHAMP. What a heel move. What a moment.

IS IT SPICY: Not in a storyline sense, but very few of these matches have much “feud” behind them. What makes this one so exciting is the sheer amount of starpower that will be in the ring at the same time, including several “first time in a WWE ring” encounters that we’re going to get to enjoy. This will feel like a mini-Royal Rumble with so many “stop everything so these two superstars can suddenly stand across from each other in the ring while the crowd goes ‘ooooOOOOHAAAHHHH!’ at them” moments. As long as the match isn’t just that, it’ll be great. There’s not a weak link in the bunch; even baby punch Shane McMahon will get an ooh-ahh moment when he stands across from the giant Strownman, and then his old competitor Kurt Angle, and then his brother Triple H. I’m convinced Triple H is in the match just for that moment, in fact. Mix in a little NXT on NXT action, some classic John Cena ham and baby you got a stew goin’.

WHAT SHOULD HAPPEN: I think this match will be all about Braun Strowman and to a lesser extent Samoa Joe. Other than Nakamura, there’s no one on the Smackdown side that makes sense to build the match around, especially not the finish. This looks like Raw’s year (go figure), so here are my predictions…

WHAT IS IT: It’s AJ Styles vs Brock Lesnar. It’s the best WWE wrestler of 2016 taking on the best WWE wrestler of 2003. Unfortunately this is 2017 which means AJ is still the best and Brock Lesnar is…content with throwing a few suplexes, maybe a shoulder block, hitting his F5 and going back to the tundra from whence he came to hunt Elk with a spear or whatever he does 345 days a year.

IS IT SPICY: Does it feature Jinder Mahal…anywhere?

WHAT SHOULD HAPPEN: Paul Heyman should tell Brock to try. He got him to try against CM Punk in 2013 and produced Brock’s last well-wrestled one-on-one match. Everything else, other than the amazing triple threat in January of 2015 and the fun but stupid Goldberg squashes have been blah. You can say the WrestleMania 31 main-event was great if you want; I was there and the crowd really elevated a pedestrian match. That was the birth of Lesnar’s lazy “suplex city” style. Somewhere deep inside that gigantic frame is the amateur wrestling champion that Kurt Angle worked magic with a generation ago. If anyone can bring that back out of him, it’s AJ Styles. I hope he gets the chance.

After all, after six months of Jinder Mahal, does Vince really want to have the WWE Champion get squashed in a typical Lesnar fashion? All in the name of keeping him strong to be beaten by Reigns at WrestleMania? Surely not.