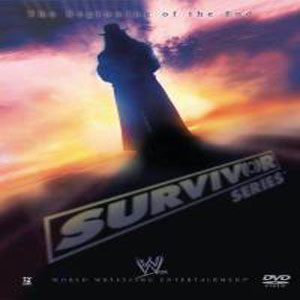 The month was November, the year 2005, and the monthly Pay-Per-View was Unforgiven, taking place in the Joe Louis Arena in Detroit. The card on paper looked rather thin, with all the hype for the event being placed on the big Survivor Series style match between Team RAW and Team SmackDown! But we also had a WWE Title match, and a big grudge match between Ric Flair and Triple H and two other inter-promotional matches to look forward to. Or in this case, one to look forward to, one to dread.

The PPV kicks off with its usual pyro display, and the first match up is the Best Of Seven series inaugural match, Chris Benoit taking on Booker T in the first contest of seven to decide the undisputed United States Champion. This match came about following a double pin situation on SmackDown! that resulted in Teddy Long holding up the US Title, and making the Best of Seven Series between Booker and Benoit to decide who should win the title. This of course was not Booker and Benoit’s first Best of Seven Series, they had previously competed in one in WCW to decide a #1 Contender for the WCW TV Title. Fun fact: The man who held the WCW TV Title at the time? Finlay. And you know that he loves to fight.

The match itself had a lot to live up to, mainly because the previous Best of Seven Series had been of a high standard match-wise. This match certainly was a good one, as the chemistry that Booker and Benoit have made it almost a certainty that a good quality match will always happen. This match also set the tone for the rest of the series, up until Booker’s injury caused Randy Orton to substitute for the remainder of it. All in all, this was a good way to kick off the show.

Next came a backstage skit involving Vince McMahon, John Cena, Eric Bischoff and eventually Booker T. It also involved the ‘n’ word. I was disgusted to see it the first time, and knowing what happened, I fast forwarded it the second time.

I say this every time I review something, so I’ll say it again. I’ve always been an advocate of women’s wrestling due to some people’s aspersions that women don’t belong inside the ring. That’s why, despite the rather rushed build-up of Trish being kidnapped by MNM on RAW and Melina wanting a title shot, I was looking forward to seeing the match for the Women’s Title between Trish and Melina.

Melina proved in this match that she wasn’t just eye candy, and that the wrestling she had learned whilst in OVW had been worthwhile. If you have some decent wrestling ability it’s quite likely that Trish will be able to carry you, and that’s what happened here. It was a fun little match that involved some crafty outside work from both MNM and Mickie James. The finish of the match was a bit botched, but you can’t have everything. If you don’t like Women’s wrestling, I’d suggest you watch this anyway, and maybe your opinion could start to be reversed. Perhaps what boosts this match further is the absolutely HILARIOUS commentary from the inter-promotional team of Joey Styles and Tazz.

Violence, emotion and all-out mayhem. Welcome to our next match, Triple H taking on Ric Flair in a Last Man Standing match. This match was built up by Triple H turning on Flair at WWE Homecoming, his first appearance since taking four months off for “personal reasons”. “Personal reasons” was soon revealed to be “impregnating Stephanie McMahon”. Anyway, the first match between the two happened at Taboo Tuesday, and a cage match was chosen for the two to compete in. Flair had won that time, but Triple H was dead-set on ending Flair’s career, and this Last Man Standing match was booked to end their feud once and for all.

As I mentioned, this match if full of violence, emotion, and mayhem, as the two men go all out to try and finish each other off. Weapons are used in abundance, with perhaps to most disturbing being a screwdriver that HHH uses to gouge into the head of Ric Flair. Flair bleeds, bleeds and bleeds some more, with blood all over the ring towards the end of the match. A superb brawl with a hot crowd makes this match probably the best match of the night, and a testament to Ric Flair’s superhuman ability to keep going at 58.

The lack of matches continues to take its toll as we have an in-ring segment involving Edge and Lita taunting Detroit Tigers (that’s baseball UK peeps) player Dmitri Young, and the entire city of Detroit. It’s a fun segment but you can’t help feeling that another match would have made more sense in this slot.

You know it’s a strange show when the WWE Title match is the fourth match on the card, with two other matches still left. But here was the re-match from Unforgiven, John Cena defending his WWE Title against Kurt Angle, with a special guest referee handpicked by Angle himself, the returning Daivari. After Angle had beaten Cena by DQ at Unforgiven, a re-match was always likely, and all the people begging for Cena to lose the title were hoping that Daivari would be the man to help Angle win the gold. Unfortunately the match wasn’t that focussed upon as the RAW vs. SmackDown! feud took most of the TV time.

The match itself is probably on par with their Unforgiven match, if not as good as some of their previous matches such as No Way Out 2005. The threat of Daivari is removed almost instantly, and once you’ve seen Cena kick out of one quick count, you’ve seen it a thousand times. The finish is completely overbooked and bizarre, with a SmackDown! referee making the final pinfall. Luckily the crowd do a lot to keep you watching the match, with duelling chants for Cena and Angle at times, as well as pops and boos wherever necessary.

And now for something completely different. Eric Bischoff vs. Teddy Long. For anyone interested, this was Long’s second WWE match, the first being when he teamed up with The Rock and Jack Doan in 2000. This match was purely a continuation of the big RAW vs. SmackDown! feud, yet somehow I get the feeling that the feud wouldn’t have suffered too much had this match not been added. In fact, this match would have been perfect when Steve Austin was co-RAW GM, and Kurt Angle was SmackDown! GM. But instead we get blackbelt Bischoff and… dancing Teddy Long.

As you’d expect, the match is a complete car wreck from start to finish, just a bunch of missed kicks, poorly executed chokeholds, bizarre behaviour from Palmer Canon on the outside, and not even the great Boogeyman himself can save it from negative stars. I’m sure the thought process was all there, but when the match was always going to be such a disaster, why bother?

And now to the main event, and probably the most important part of the event itself. For so long people had wanted to see a RAW vs. SD invasion feud, and this entire feud was perfectly done by both the writers and the wrestlers involved in it. When everybody wanted this feud to happen I’m sure people didn’t expect Carlito, Chris Masters or Lashley to be involved in it, but it was a good way of putting over how the new breed of wrestlers felt strongly towards their respective brands as much as the older wrestlers.

Of course, a sad part to note about this match is that Randy Orton only took part in the match due to the untimely death of Eddie Guerrero. Orton had been scheduled to take on The Undertaker in a Buried Alive match, an idea that was scrapped almost immediately following Eddie’s death. The “Eddie” chants are loud at the show, and it seems a lot more dignified to just wear the armbands and acknowledge the crowd than the way the WWE are currently using Eddie’s name for their storylines.

But back to the match, and as with most Survivor Series style matches we get a good blend of different styles, and the team format allows a story to be told throughout. For the second time in the last three years, that story is “HBK has to beat three people from one team by himself”, and you can’t help feeling a bit cheated that they re-used the same formula from Survivor Series 2003. But it works, so as the phrase goes, if it ain’t broke, don’t fix it. A few negative points about the match is the odd early elimination of Lashley, and the lack of ring-time given to Carlito. Otherwise everything gels together nicely, and it’s well-deserving of the main event status it received. The PPV then ends here.

Oh wait, that was just my greatest dream ever. The PPV DOESN’T end here, but instead we get the return of The Undertaker in the most bizarre ending to a PPV until the 2006 Royal Rumble where it gets worse. The Undertaker emerges from a flaming coffin to go after Orton, but when Orton leaves the ring he just destroys random members of the SmackDown! roster who have no problem with him. If you look closely, you can watch Matt Hardy roll out of the ring and into a complete burial, as he refused to be Chokeslammed by the Taker and ended up jobbing for months as a punishment. As I say, a bizarre end to a good PPV, and it’s a shame we get left with the sour taste of the last segment.

After reviewing two single-brand PPVs I finally get a mixed-brand one, and I get rewarded with three good extras.

The first segment is a great treat for Boogeyman fans such as myself, the second segment shows Kurt Angle at his intense best, and the interview is quite funny, followed by a nice video package of previous Survivor Series moments. Definitely one of the best Extras packages I’ve seen, but again, nothing overly special.

In conclusion, I do think that the PPV was good. Most of the matches were of a good standard aside from a noticeable exception and some even more embarrassing non-wrestling segments, the PPV manages to hold its head high.

My match of the event was Ric Flair vs. HHH. My worst match was a simple decision to make, Theodore Long vs. Eric Bischoff was almost embarrassing to watch.

It’s by no means a must for wrestling fans, but if you want to watch a good PPV and get some entertaining extras as a bonus, this DVD would be well worth picking up.