Thanks to those good people down at Silvervision today I got chance to watch the DVD release of Survivor Series 2004. This event wasn’t broadcast on Sky Sports 1 last year it was instead a Sky Box Office production so this is another important release for those that missed it last year. So for those of you considering buying the DVD, please read on. 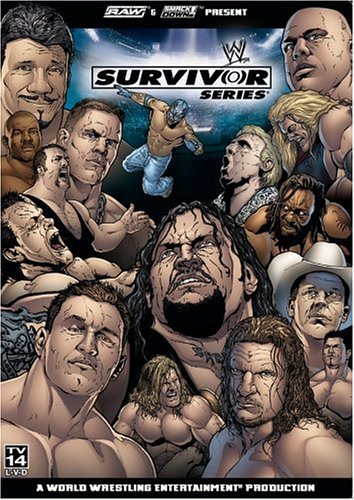 Survivor Series is WWE’s yearly Thanksgiving Day tradition. Every November around Thanksgiving Day the wrestlers come out to put on one of the top shows of the year. Famous Survivor Series moments include the big Hulk Hogan vs. Undertaker confrontation at Survivor Series 5, the infamous Bret Hart screw job in 1997 and the debut of the elimination chamber in 2002. So 2004 had a lot to live up to and the main thing on my mind before I watched the event was could Survivor Series produce another history making moment in 2004?

Due to the roster split it is very hard to produce a quality card full of the old fashioned 8 man elimination tag team matches you came accustom to with the Survivor Series events. The WWE did well though to produce two quality Survivor series match ups which both headlined their respective side of the card one for Raw and one for Smackdown. I think this is the best way to go and it’s good to see a little bit of tradition back in the Survivor Series events its like having a Royal Rumble without a 30 man rumble it just wouldn’t be right.

Next up we saw Shelton Benjamin enjoying his hottest period since he joined the WWE defending his newly won Intercontinental title against Christian. Shelton had only won the title a month previous against Chris Jericho at Taboo Tuesday and gave another awesome performance against one of the most underrated guys on Raw the CLB himself, Christian.

The Undertaker vs. Heidenrich may see you finding the fast forward button on the remote or going out to the fridge for some food but it was good to see Heidenrich getting the push that he is on and you never know he maybe the next big thing. One good thing that did come of the two rosters coming together was one of the funniest backstage segments of the year between Gene Snitsky from Raw and Heidenrich from Smackdown.

The Women’s championship match was a bit different from what we are used to in the women’s division and it was over before it began but it helped develop Lita and Trish’s feud to boiling point as the blood spilled.

The two Survivor series matches were really good in my opinion but I do have a soft spot for these kind of matches. Both were full of storylines on the Raw side the stipulation was that each member of the winning team would be able to control Raw for one week each and on the Smackdown side you had the returning John Cena after being stabled by Carlito “Caribbean” Cool and his henchman Jesus he was making his comeback to get even.

The WWE title match between JBL and Booker T was a let down in my opinion. I am a big Booker T fan but since he joined the WWE he has never looked ready to be the champion and at this time JBL was still developing so I wasn’t expecting anything in all fairness. The match was made interesting when Smackdown announcer Josh Matthews did a run in to try and help his buddy Booker T out but he was quickly sent packing with a clothesline from hell.

The only thing that lets the DVD down is the extras because the extras are now so good on a lot of the wrestler profile releases they make the good extras on Survivor Series 2004 seem poor. I would maybe like to see on each event DVD release a few more history extras like what built up to certain matches and the history of the event itself.

In what was a hard year for WWE losing a lot of headline talent and no real new big names emerging Survivor Series was one of the better events of the year. Behind Wrestlemania 20 I would put it as my favourite.