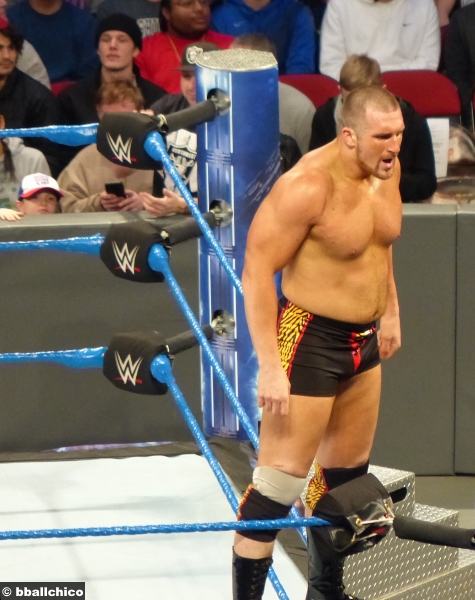 After Daniel Bryan did not follow through on firing Kevin Owens & Sami Zayn last week, SmackDown LIVE kicks off with SmackDown LIVE Commissioner Shane McMahon. Shane says that Kevin Owens & Sami Zayn openly admitted that they have “no respect” for the SmackDown LIVE roster, the Commissioner, or the fans. Shane then says that he was actually looking forward to firing Owens & Zayn last week but Daniel Bryan intervened and instead put Owens & Zayn in a Lumberjack Match. Shane continues, saying he approved of this idea because he was under the impression that Daniel would fire Owens & Zayn after the match was over. The Commissioner then says that he and Daniel have had many conversations about what happened last week but he feels that they should hear it from Daniel himself, introducing the SmackDown LIVE General Manager.

SmackDown LIVE General Manager Daniel Bryan then makes his way to the ring, explaining that Kevin Owens & Sami Zayn really wanted to be a part of Survivor Series before admitting that Owens & Zayn should not have interfered in the main event. The GM then tells Shane that his temperament gets the best of his “better judgment” before the Commissioner reminds Daniel that Kevin Owens viciously attacked his father while Sami Zayn got involved in his Hell in a Cell Match and both Owens & Zayn attacked him during the main event of Survivor Series. Daniel says that Owens & Zayn did all of that in the spirit of competition, saying that he sees “real talent” in Owens & Zayn and, if they fire them, they will ultimately end up on RAW. Shane comments that letting Owens & Zayn go to RAW would make them his sister’s “problem” instead.

The GM then says that Shane left him in charge last week, saying that he’s not a “yes man” before saying that he’s a guy who recognizes in-ring talent and wants to use that talent the best that they possibly can and he just needs Shane to “trust” him. The Commissioner says that he does trust Daniel before complimenting the GM on making the match between Kevin Owens and Randy Orton before saying that he is going to improve upon the idea, announcing that Sami Zayn will be banned from ringside for the match and, in addition, the match will have no disqualifications!

With SmackDown Tag Team Champions The Usos guests on commentary, two teams that The Usos are very familiar with would square off in the opening match of the night as The New Day’s Kofi Kingston & Xavier Woods, with Big E in their corner, would face Chad Gable & Shelton Benjamin in tag team action. In the end, it was Xavier Woods & Kofi Kingston hitting the Up, Up, Down, Down on Shelton Benjamin with Xavier pinning Benjamin to pick up the win for The New Day.

In a rematch from last week, The Bludgeon Brothers would face The Hype Bros on SmackDown LIVE. Similarly to last week but with the roles reversed, Mojo Rawley would get knocked off of the apron early in the match, allowing The Bludgeon Brothers to isolate Zack Ryder, ultimately hitting Ryder with the double arm-lift crucifix powerbomb with Rowan pinning Ryder for the win. After the match, The Hype Bros are interviewed about their losing streak as Zack Ryder explains that the landscape of SmackDown LIVE has changed so they have to change, saying that they’ve hit “rock bottom”. However, Ryder is then cut off by Mojo Rawley, who attacks his own tag team partner from behind! Mojo kicks Ryder in the mid-section before pummeling Ryder while screaming that “The Hype Bros are dead”. Referees try to pull Mojo off of Ryder, eventually getting Rawley to leave the ring before checking on Zack Ryder.

Later on in the match, Liv Morgan & Sarah Logan would hone in on Naomi on the outside, sending Naomi shoulder-first into the barricade before standing the bottom half of the steel steps up on their end before sending Naomi into the steel! Morgan & Logan then lean the steel steps against the barricade before Logan catapults Naomi face-first into the heavy steel! As medical personnel tend to Naomi, Charlotte Flair is left all alone against The Riott Squad. Despite the best efforts of Charlotte Flair to battle back, the odds were too much for the SmackDown Women’s Champion as a knee to the face from Sarah Logan would set Charlotte up for the Riott Kick from Ruby Riott, who pins Charlotte to pick up the win for The Riott Squad.

Then it was time for the main event as Kevin Owens would go one-on-one with “The Viper” Randy Orton in a no disqualification match with Sami Zayn banned from ringside. It wouldn’t take long for “The Viper” to bring out the weapons against Kevin Owens, first, driving the steel steps into the face of Kevin Owens before wearing Owens out with repeated kendo stick shots on the outside. Owens then grabs a kendo stick, catching Orton with a shot to the leg with the stick before sending “The Viper” into the ring post before slamming Orton into the ringside barricade. Later on in the match, Randy Orton would look for the RKO in the ring but Kevin Owens would roll out of the ring before trying to escape through the crowd.

Orton then brings Owens out to the stage and this is when Sami Zayn would get involved, using a steel chair on Orton’s left leg as Sami avoids breaking the rules by technically not being at ringside during the match. Owens then brings Orton back to the ring but “The Viper” still fights back before looking for the RKO but Owens dodges, targeting the leg of Orton before blasting Orton with a super kick. Owens then comes off of the top rope with a frog splash, pinning “The Viper” for the win. Kevin Owens then celebrates his big victory, having stuck it to Shane McMahon once again.