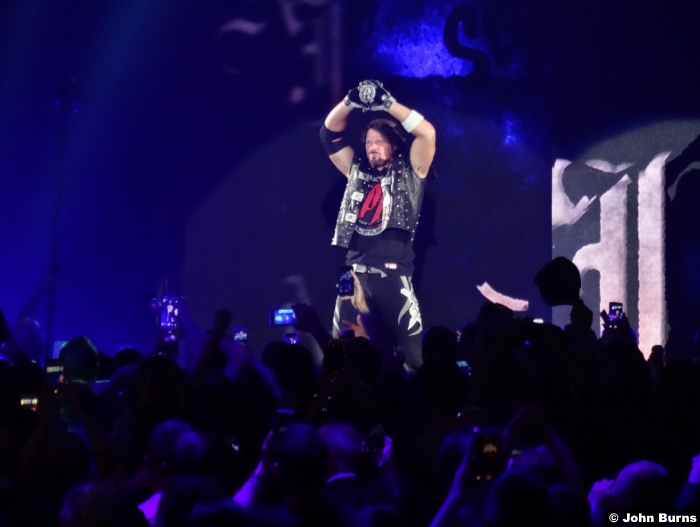 After saving Shinsuke Nakamura from a post-match beatdown at the hands of Baron Corbin after SmackDown LIVE went off the air last week, putting “Mr. Money-in-the-Bank” through the announce table with an Attitude Adjustment, SmackDown LIVE kicks off with sixteen-time former World Champion John Cena. Cena says that he found out last week that Shinsuke Nakamura fears “nothing” before saying that Nakamura “hits hard, real hard”. Cena admits that he underestimated Nakamura last week and he “lost”, saying that it doesn’t really happen to him a lot. Cena continues, saying that he did the right thing and shook the hand of a man who has what it takes to become a champion and, out of respect, Nakamura shook his hand as well. Cena is then interrupted by the arrival of the man that Cena put through the announce table last week, Baron Corbin, as “Mr. Money-in-the-Bank” comes out to the stage. Corbin says that Cena stuck his nose in Baron’s business last week, saying that he is the “future” and he has no problem making Cena the “past”.

John Cena responds by calling Baron Corbin an “overrated dumpster fire” before saying that, if Baron wants to “dance”, then maybe he should come down there so he can put “Mr. Money-in-the-Bank” through another table. Corbin says that he does what he wants, when he wants, saying that Cena doesn’t have anything that he wants or needs and he doesn’t “need” to beat John Cena. Corbin then says that all he needs is the WWE Championship so John Cena is not “worth” his time. Corbin then starts to walk to the back but he is halted by SmackDown LIVE General Manager Daniel Bryan, telling Baron Corbin that, at SummerSlam, he has a match against sixteen-time former World Champion John Cena!

Before they get their rematch against The New Day for the SmackDown Tag Team Titles at SummerSlam, The Usos would face the Canadian super-team of Sami Zayn & Tye Dillinger on SmackDown LIVE. In the end, it was Jimmy Uso locking in the Tequila Sunrise on Tye Dillinger, making “The Perfect 10” tap out to pick up the win for The Usos. After the match, The Usos would start to mock The New Day before the SmackDown Tag Team Champions interrupt. However, only Big E would come out to the stage, drawing the attention of The Usos so that Kofi Kingston & Xavier Woods could attack The Usos from behind! The New Day would then beat The Usos down before Xavier Woods grabs a couple of steel chairs but before The New Day could use the chairs against The Usos, the brothers are narrowly able to escape for the time being.

In an attempt to establish herself as a threat in the SmackDown LIVE Women’s Division, SmackDown LIVE would see “The Ravishing Russian” Lana go one-on-one with “The Queen” Charlotte Flair. For the majority of the match, Charlotte Flair would toy with her inexperienced opponent before locking Lana in the Figure-Eight, making Lana tap out as Charlotte picks up the win.

AJ Styles admits that he wasn’t happy when Daniel Bryan made Shane McMahon the Special Guest Referee at SummerSlam before saying that the officiating hasn’t been “great” anyways. The United States Champion then accuses Kevin Owens of trying to “stir the pot” but it isn’t working before Styles says that, if Shane screws him out of the United States Title at SummerSlam, then Shane will have to face the “repercussions” just like the Commissioner did at WrestleMania! AJ then tells Shane not to take offense to it before saying that he doesn’t trust anyone, especially not a McMahon. Shane says that Styles must be confusing him with other family members because he doesn’t operate like that. Kevin Owens then continues to try and cast doubt about Shane McMahon, pointing out that this won’t be the first time that Shane McMahon has been a referee in a match.

Owens then shows footage from the 1998 Survivor Series where Stone Cold Steve Austin hit Mankind with the Stunner and had the pinfall but, with the assigned referee down, Shane McMahon would don the stripes and rush to the ring. However, in that instance, Shane would refuse to count the pinfall, instead giving Stone Cold the finger and getting out of dodge. Owens then says that it’s amazing what you can find on the WWE Network, saying that you can make a Network Collection out of Shane McMahon’s questionable officiating.

Shane responds by saying that none of that matters because he is going to call it “right down the middle” at SummerSlam and he’s not going to get physically involved in the match unless he “has to”. The Commissioner then tells both men to not give him a “reason to get involved”. Styles then says that they should make it easy for anyone, admitting that Owens wasn’t pinned last week before suggesting that they get rid of Shane McMahon and not wait until SummerSlam, proposing they have their rematch for the United States Title right here, right now! However, Owens says that he would rather win the United States Title in the United States in a city that “actually matters”.

The United States Champion then gets in the face of Kevin Owens, saying that this is as close as Owens is ever going to get to the United States Championship. Owens responds by shoving Styles and AJ shoves back before Shane tries to keep the SummerSlam opponents separated. Owens then gets a cheap shot in on Styles and AJ fires back with the Pele Kick, but the kick inadvertently strikes Shane McMahon, laying the Commissioner out! Kevin Owens is then quick to leave the ring with a big smile on his face, laughing as Owens effectively creates friction between AJ Styles and Shane McMahon.

Backstage, Tamina confronts Lana following Lana’s loss to Charlotte Flair. Tamina says that it wasn’t Lana’s looks that got her three back-to-back title opportunities, it was her “ambition” and, now, Lana is going to help her get her shot at the SmackDown Women’s Title.

In what could be a sign of things to come in the event that Carmella decides to cash in her Money-in-the-Bank contract, SmackDown LIVE would see SmackDown Women’s Champion Naomi go one-on-one with “Ms. Money-in-the-Bank” Carmella in a non-title match. During the match, Carmella would have Naomi on the top rope, pulling at her hair. This would result in the referee restraining Carmella but this would also be the perfect opportunity for the returning James Ellsworth to get involved, coming out from under the ring and knocking Naomi off of the top rope. This would allow Carmella to catch Naomi with a super kick, pinning the SmackDown Women’s Champion to pick up the win.

Then it was time for the main event as WWE Champion Jinder Mahal would return home to his home country of Canada to go one-on-one with bitter rival Randy Orton in a non-title match and, with The Singh Brothers out of action due to injury, Jinder would have to go it alone against “The Viper”. Early on in the match, Randy Orton would set his sights on destroying the WWE Champion, exposing the announce table on the outside with Jinder Mahal narrowly able to avoid being put through the table. In the end, Jinder Mahal looked like he was about to put Randy Orton away with the Khallas but “The Viper” was able to counter with the RKO, pinning the WWE Champion to pick up the win, earning a measure of revenge against “The Modern Day Maharaja”! Orton then leaves the ring with a smile on his face as Jinder sits in the ring, clutching his WWE Title but just when Orton is about to head backstage, he is blasted with a Machka Kick to the face from Rusev, leaving “The Viper” laid out on the stage!