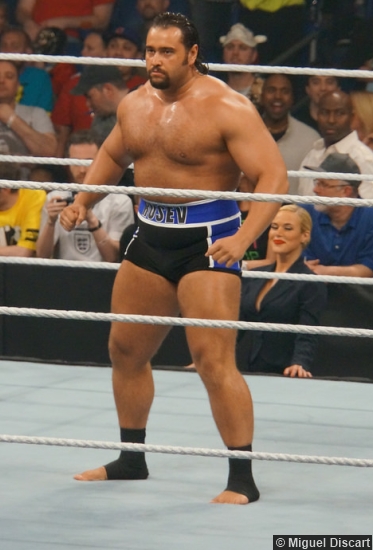 Twelve nights before SummerSlam, the 938th edition of WWE SmackDown LIVE came to you, live, from the Air Canada Centre in Toronto, Ontario, Canada. After Shinsuke Nakamura beat John Cena in a hard-fought match last week to earn the opportunity, we now know that, at SummerSlam, “WWE’s Rockstar” will challenge Jinder Mahal for the WWE Championship, but before Jinder Mahal can set his sights on Shinsuke Nakamura, “The Modern Day Maharaja” has some unfinished business in the form of Randy Orton as WWE Champion Jinder Mahal would go one-on-one with “The Viper” Randy Orton in a non-title match on SmackDown LIVE! After repeatedly being cheated out of the WWE Championship by Jinder Mahal and his buddies The Singh Brothers, as well as The Great Khali, will Randy Orton get a measure of revenge against Jinder or will the WWE Champion defeat “The Viper” and finally bury his issues with Orton? Also, after last week’s United States Title rematch ended in controversy where the referee counted a pinfall despite Kevin Owens’ shoulder clearly being up, Owens would demand a competent official for his United States Title match against AJ Styles at SummerSlam and Owens would get just that as SmackDown LIVE Commissioner Shane McMahon will serve as the Special Guest Referee! Before the rematch, however, Shane McMahon, AJ Styles, and Kevin Owens would be in the same ring at the same time as Shane would present the “rules of engagement” to both men to, hopefully, leave no doubt about how he will officiate the match.