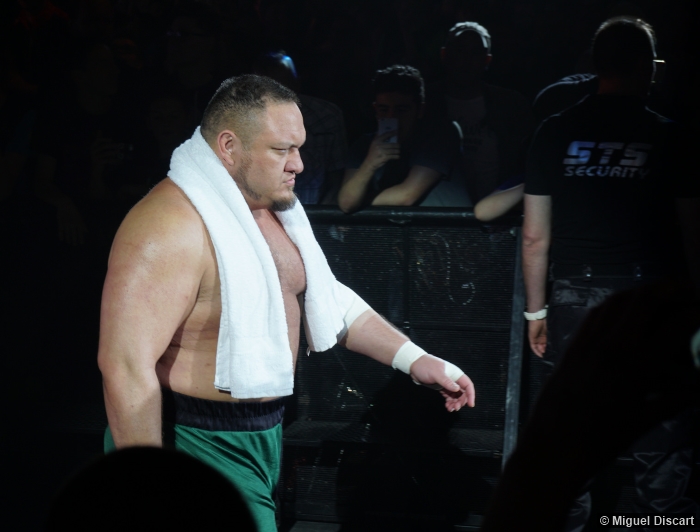 Joe Versus The Beast.

The ninth annual WWE Extreme Rules was a RAW exclusive pay-per-view and it came to you, live on the WWE Network, from the Royal Farms Arena in Baltimore, MD. Having been lying dormant since the night after WrestleMania, “The Beast” has been awaiting an adversary for his Universal Title and, at Extreme Rules, he would get one as a Fatal 5-Way Extreme Rules Match would determine a new #1 Contender for Brock Lesnar’s Universal Championship when “The Kingslayer” Seth Rollins, “The Destroyer” Samoa Joe, “The Demon King” Finn Balor, “The Eater of Worlds” Bray Wyatt, and “The Big Dog” Roman Reigns would wage war in a match with no disqualifications and no count-outs where the first Superstar to score a pinfall or a submission will walk out of Baltimore as the new #1 Contender with a match against Brock Lesnar for the Universal Championship awaiting them down the line. None of the five Superstars in the match are strangers to taking things to the extreme and, with a shot at the Universal Title up for grabs, it’s practically a guarantee that Seth Rollins, Samoa Joe, Finn Balor, Bray Wyatt, and Roman Reigns will put it all on the line to get their chance to slay “The Beast”. Now the question remains, who has what it takes to survive such a lawless free-for-all with so much on the line? Who will leave Extreme Rules with a shot at the Universal Championship on the horizon?

Appropriately enough, the legendary team synonymous with the word “extreme” would put their titles on the line at Extreme Rules as The Hardy Boyz would certainly bring their careless, high-risk style to Baltimore as Matt and Jeff defend the RAW Tag Team Titles against Cesaro & Sheamus in a Steel Cage Match! Returning to the Extreme Rules event after a seven-year absence, “Team Extreme” would step inside the unforgiving steel structure to put the most prestigious tag titles in WWE on the line against a team who has adopted quite the new attitude in Cesaro & Sheamus. Frustrated over The Hardy Boyz making their surprise return at WrestleMania and taking what they perceive to be their moment, Cesaro & Sheamus will look to use their ruthless style to reclaim the RAW Tag Team Titles in a match that was picked by The Hardy Boyz themselves. With victory only being obtained by both members of a team escaping the cage, either over the top or through the door, with both feet touching the floor, can the veteran Hardy Boyz take the necessary risks to keep the RAW Tag Team Titles or will Cesaro & Sheamus look to put “Team Extreme” out of their misery once and for all?

Since coming to RAW in the Superstar Shake-Up, Alexa Bliss has wasted no time in making an immediate impact on the RAW Women’s Division. After winning a Fatal 4-Way Match in her hometown to earn the opportunity, Bliss would take full advantage of her title opportunity at Payback, defeating Bayley to win the RAW Women’s Title and become the first competitor in history to win both the RAW Women’s Title and the SmackDown Women’s Title in her career. Now, in the spirit of Extreme Rules, the rematch for the RAW Women’s Championship would be contested as a Kendo Stick on a Pole Match! In this unique matchup, the first Superstar to climb up and retrieve the kendo stick hanging from a pole attached to the ring post can legally use the kendo stick as a weapon in the match with the match only ending by pinfall or submission. Can Bayley go to the extreme to reclaim the RAW Women’s Championship or will the self-proclaimed “Goddess” Alexa Bliss remain on top of the RAW Women’s Division?

Over the last couple of months, Austin Aries has come extremely close to winning the Cruiserweight Title and “A-Double” was never closer than at Payback when Aries had Neville all but defeated after locking in the Last Chancery. However, desperate to keep the title, Neville would put his hands on the referee to get himself disqualified. While saving his title for the time being, the self-proclaimed “King of the Cruiserweights” would find himself having to defend his title against Austin Aries one more time at Extreme Rules as Neville would defend the Cruiserweight Title against Austin Aries in a Submission Match, where the only way to win is by making your opponent submit. With Austin Aries going into battle with his Last Chancery while Neville has the Rings of Saturn in his arsenal, who will make their opponent submit and who will walk out as the Cruiserweight Champion? Also at Extreme Rules, the bitter rivalry between Sasha Banks and Alicia Fox would come to a head in a Mixed Tag Match as “The Boss” would enlist the help of Rich Swann to combat Alicia Fox and her boyfriend Noam Dar. Having gotten the better of Alicia Fox in one-on-one matches in recent weeks, can Sasha Banks & Rich Swann emerge victorious over Alicia Fox & Noam Dar?