We are now four movies into Warner Bros. comic book universe, and it feels like they finally have a movie everyone can agree on. 2013’s Man of Steel was luke-warmly received, with much of the criticism directed towards the drag, grim look that permeated around the one superhero above all who is supposed to be above all that sort of thing. Batman v Superman came out last year to even less positive reception, and though I didn’t hate it (I gave it an 8 that was almost a 7), I did spend most of last summer having to explain why I liked it and what wasn’t wrong with it, like it was an 8 year old’s terrible drawing of a dinosaur that only his mother could truly love: “if you turn it this sort of way it doesn’t look so funny!” The less said about Suicide Squad (and its terrible studio intervention that certainly contributed to its pitiful finished product) the better.

Wonder Woman was do or die for the DCEU. If this movie was another middling, joyless, meandering, brood-fest, with an inconsistent tone and obnoxious directorial choices, the universe Warners is trying to build would have finally collapsed under its own weight. Fan goodwill and desire to see comic’s other bunch of heroes fully realized will only go so far. Eventually you need a genuine hit, or fans will just give up.

Thank heavens Wonder Woman is a good film. It’s not just a good DCEU movie, nor just a good comic book movie, it’s a straight-up well-made movie in all respects: direction, acting, effects-work, writing. It does everything either good, very good, or—occasionally—great. It’s the movie that should have followed up Man of Steel. It’s the best origin story Warners has had since Batman Begins, and it’s a lot harder to make Wonder Woman work on the big screen than Batman. The Dark Knight is tailor-made for movies; his look, his backstory, his archetypal enemies: They’re all well-known to everyone. Wonder Woman is best known as the star-spangled hotpants-wearing Linda Carter, whose actual comics origin story is a lot less famous. Making a batarang work is easy; making a lasso of truth work is not. 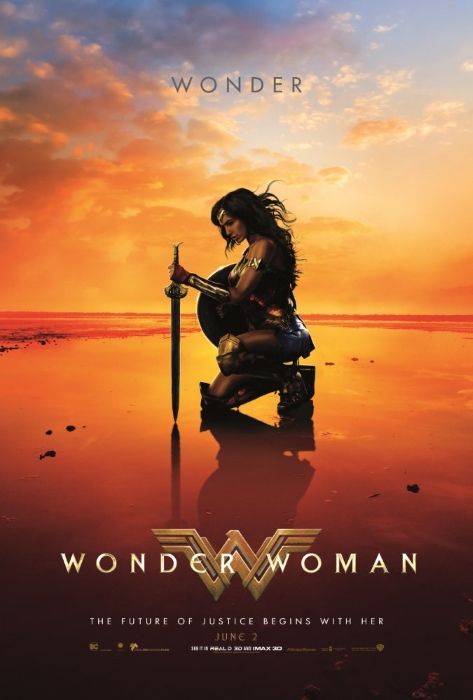 So all credit and praise be given: Wonder Woman is great.

Seriously, that woman could stop the earth from spinning. It’s like she smirked to someone at some point early in the making of the movie and they (fortunately) said “let’s have you do that ten more times.” Gadot is beyond charming, and had great chemistry with everyone she played off of in the movie, but that smirk is something else.

2) The rest of Gal Gadot 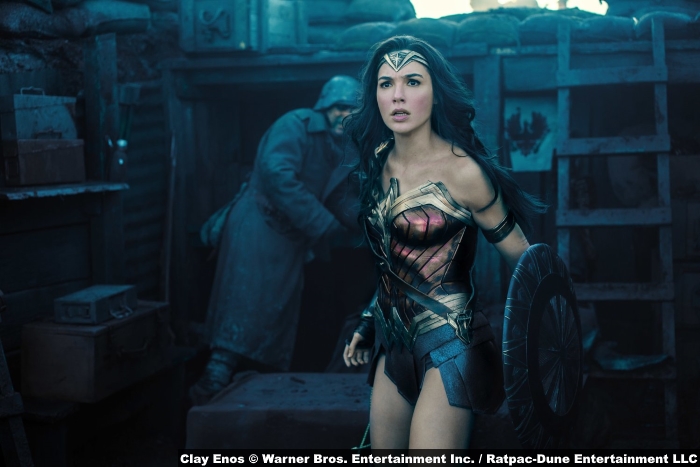 Her casting a few years ago (for Batman v Superman) was met with mixed-response, with most of her critics arguing against her acting ability and small frame. Obviously if you don’t look like the part and you can’t act like the part, you’re going to have a bad time. Fortunately those criticisms were unfounded; she stole the show in Batman v Superman, and proved here that she could more than carry her own movie. As everyone knows by now, this is the first superhero film directed and starring a woman, and both ladies bring their A-game.

There’s maybe one scene, toward the end of the movie, where he overacts a tad, but when he was allowed to be his relaxed, too cool for school self, Pine was perfect. He was charming, funny, and when needed, his character was just the right amount of heroic (yet never too much to overshadow Wonder Woman herself).

Both of these were the real killers of Suicide Squad (along with a terrible antagonist and no discernible hero to follow, but let’s not revisit that movie), and both held Batman v Superman back (at least the theatrical cut did). In Wonder Woman, however, these allow the movie to shine. The film runs twenty minutes over the standard two-hour runtime, but it never drags. Scenes are tight but not rushed, and there was never a moment where you could feel the editing, making you wonder “why did we jump from there to here” or “why didn’t they show…”

5) Love for the character

Patty Jenkins was originally set to direct a Wonder Woman film for Warner Bros., almost a decade ago, but she suddenly became pregnant and had to leave the project. Joss Whedon was briefly on board (he’s now helping to finish Justice League and will soon start on his Batgirl film), and even Paul Feig pitched an action-comedy adaptation. Michelle MacLaren looked to be the one to finally bring the project to life, but she backed off just before production began. By then Patty Jenkins was available again and was able to make the movie she called her “dream project.” Her passion for the character is evident when watching; the film is in love with Wonder Woman, from the bright colors of Themyscira to the gender-neutral (not cliched) way her heroism is portrayed, it’s a joy to see so much obvious love poured out onto the screen.

Rupert Gregson-Williams is not a famous Hollywood composer; most of his work has been wasted on bad comedies like Click and Grown-ups 2 and Jack and Jill, but he impressed recently with the score for Netflix’s The Crown, and for Mel Gibson’s big war movie comeback film Hacksaw Ridge. A lot of the latter score can be felt here, especially in the intense battle scenes. Outside of the action-heavy parts, the quieter, character-building moments are not simply punctuated by cues, but are overlayed by a steady stream of orchestra that feels very much at home for a movie set 100 years ago. The score felt like something from a 1950’s Hollywood Epic. It was romantic, sweeping, and knew when to tip toe in the background and when to make its presence known. Most impressive is that he resisted the urge to overdo the great Wonder Woman leitmotif that Hans Zimmer introduced in Batman v Superman. It’s used in this film only three times, but that makes it a pleasant surprise each time, like an exclamation point in the middle of a great action scene. It’s one of my favorite comic book scores in years.

7) The Battle in Belgium 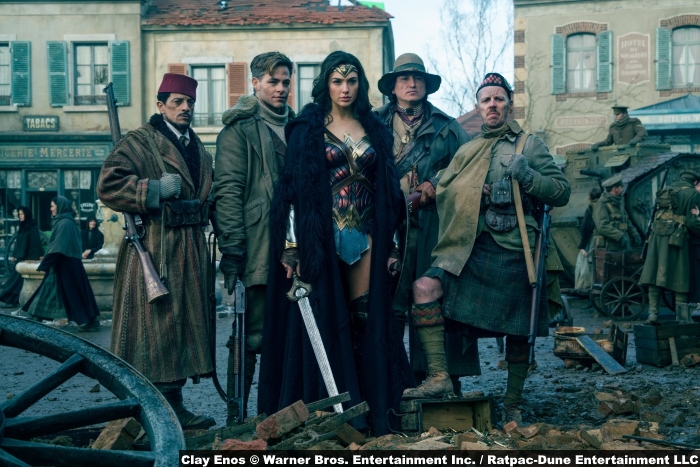 This is the big action scene mid-way through the picture, and is a show-stopper indeed. The right blend of slo-mo and fast-paced frenzy, of heroism from the ordinary soldiers (too often movies like this make the non-“super” heroes incompetent) and from Wonder Woman herself. She powers through the storm of bullets, decked out in her red and blue outfit looking very much like she stepped out of the comic. It’s still surreal to see, as a fan who remembers the days when Hollywood adaptations were ashamed to let their comic book characters look like their characters in movies. Seeing Wonder Woman knocking back bullets with her bracelets, lassoing people and flipping tanks all while wearing her red top and blue skirt…it was delightful.

Speaking of, the movie is genuinely fun. It’s not brooding or angsty. Yes, it’s set during World War I, so naturally it’s going to commentate on the horrors, but it never slips into being too preachy or too preoccupied with “gravitas” that it forgets how to simply, purely, viscerally entertain. There are delightful homages all over the place, from Diana being introduced as Steve’s secretary (a nod to her early comic book days), to her trying on dresses and wondering how to fight in them (winking at the Linda Carter show), to a wonderful moment where she stops a bullet in a back alley that was meant for Steve, much like Clark did for Lois in the 1978 Superman film. You’ll smile more in this movie than you have in the previous three from DC combined.

9) Taking the best of the MCU while still being unique

DC movies, like DC’s comic characters, are not the same as Marvel’s output. Marvel makes popcorn, DC makes epics. Marvel stories are about men figuring out how to be gods; DC stories are about gods figuring out how to be men. That’s how it’s always been, and their respective movies reflect that. I’m glad DC has not completely abandoned what makes them unique from their little brothers at Marvel, but at the same time, Marvel has a pretty good handle on the “formula” for a successful comic book movie (tight, funny, well acted, a simple plot that makes sense, embrace the character’s look and traits, and above all have fun), and Wonder Woman does a pretty good job emulating that, while still retaining its “epic” feel. This movie is a hybrid of the first Captain America and Thor movies, but it’s not a naked copy of those films. It simply takes what worked and filters it through what makes Wonder Woman work. The result is a movie that just…works. 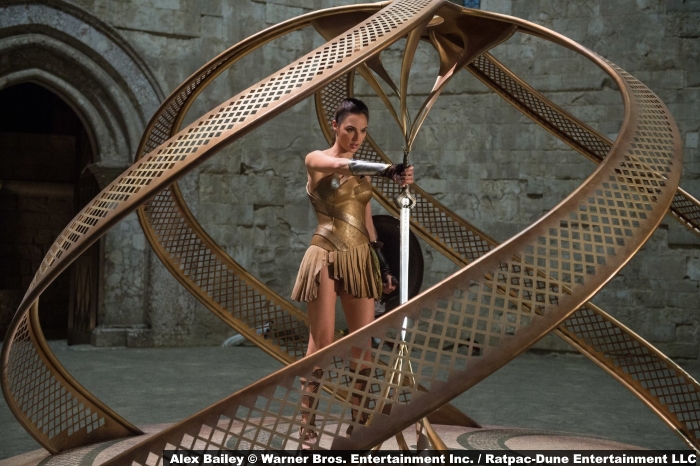 No shortcuts were taken. No compromises were made. No “knowing eye rolls” at how “silly” it is that she’s the Daughter of Zeus, or that she fights with a lasso, etc. None of the crap comic fans had to put up with a generation ago. This movie is a faithful, loving adaptation of one of comic books first superheros, and one of the most important heroes in the DC roster. It never should have taken this long to do it, but here it is, and it was done right.

Praise aside, the movie is not perfect. The mystery surrounding its villain will probably be figured out by you long before it is revealed on screen, and the final boss fight that follows is not much to write home about. The team of scrappy losers recruited on Steve’s do-or-die mission are also a little under-developed (or maybe it’s just their development was rushed; a sacrifice in the name of pacing). But those are minor complaints that don’t really take away from how great an accomplishment this movie is. If more of DC’s output is like this, we might finally have some genuine cinematic competition on our hands.

9/10 – Wonder Woman is a wonderful debut for an important comic book character, a fun movie, and a needed pick-me-up to DC’s wobbly cinematic universe.