Red vs Blue and The Force Awakens

After months of waiting (and two billion dollars at the box office), Star Wars fans are finally able to own The Force Awakens on home video. Amazingly, the movie is still making about a million dollars a week in theaters, but its time in the sun is passed and the blu ray (and digital release) is now here. No doubt fans will be pouring over their favorite scenes, taking in the fast paced adventure while also looking for easter eggs and clues that might have been placed in the movie for eagle-eyed viewers to spot. Personally I will be watching (and rewatching) Rey’s vision scene, which occurs at exactly the halfway point of the movie. For details on that, check out this summary.

While you watch it at your hearts content let me offer you something else to keep an eye out for. As with all Star Wars movies there is a strong theme of “conflict” at the heart of the story. But in The Force Awakens, that conflict is shown in more ways than just in the form of Kylo Ren and Han Solo. Visually that conflict between good and evil is presented by JJ Abrams through the use of color, specifically red (the color of evil) and blue (the color of virtue). 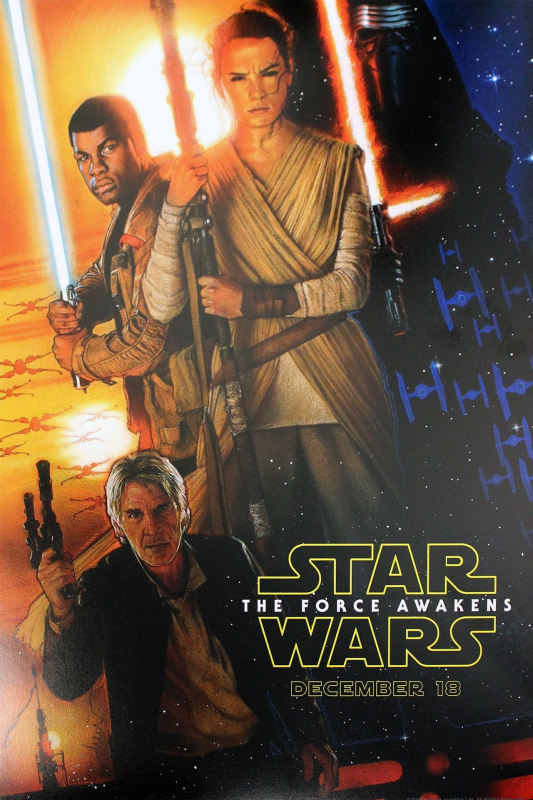 The poster itself is bathed in both colors, as the red comes from the light of Kylo’s lightsaber and the blue from the light of Luke’s. Incidentally, Rey—the pivotal character in the new trilogy—is positioned in the middle between light and dark. A hint of her hero’s journey perhaps?

The first scene of the movie is a shot of our hero’s adopted home world, Jakku, and though it is a desert planet, it is first presented to us bathed in a cool blue. That blue is drowned out by the silhouette of Kylo’s Star Destroyer.

Here we have the typically-faceless and typically-nameless soldiers of the enemy: Stormtroopers. But they are washed in blue light, not the red color that typically defines evil in this movie. Why? Because of the shorter trooper that is in the focus of the camera. He doesn’t know it yet, but he will soon be embracing the call of the hero.

Now this is more like it. This is what you expect from the soldiers of the First Order. The fire from the flametroopers floods the screen in a dark red glow as the soldiers burn down a village of people that posed no significant threat to them. 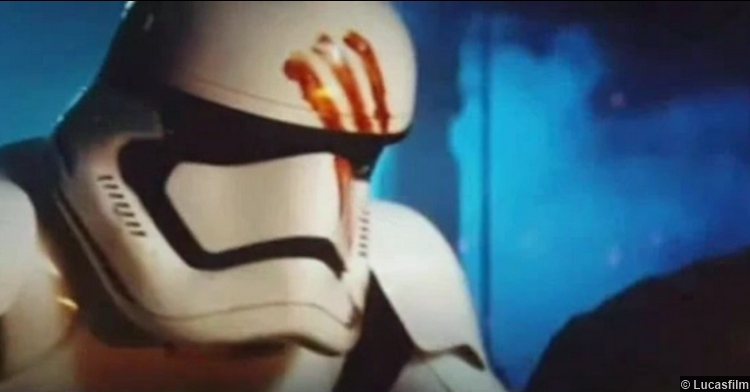 Once again we see our Stormtrooper eventual-hero and once again the predominant color is blue. But this time there is a splash of red in the form of blood-streaked finger prints. While FN2187 will eventually become the hero, his fallen comrade was just another evil minion, but it was his red-streaked death that will become the catalyst for FN’s decision to rethink his life.

Typically X-Wing’s are lined with a red stripe, but Poe Dameron’s ship is painted with a heroic blue.

The MacGuffin of the movie is a piece of a map that supposedly leads to the whereabouts of Luke Skywalker. It is a mostly nondescript silver object, but it blinks with a baby blue light.

The arrival of Kylo Ren is a scene bursting with dark red colors. The red flickers from the flames at the bottom of the screen and dances across the middle and top of the frame in the form of flying embers. Ren’s ship is a dark—and very Imperial—black, but it has a thin red line in the front.

As Kylo interrogates Lor San Tekka, Abrams positions things so that the orange and red hue of the fire is constantly in the frame. But…

…when Tekka begins talking about Kylo’s past, reminding him that his name wasn’t always “Kylo Ren” and that Luke Skywalker is his “family,” Kylo moves from the red to the blue, again giving the audience a visual indicator that this villain is more than meets the eye.

After Kylo disposes of Tekka, Poe takes his shot, firing a blue energy beam from his blaster…

…but Kylo’s force-aided reflexes are too quick. He grabs the blaster bolt in mid-air (something we’ve never seen before in Star Wars!). The sudden turn and zoom is a startling but effective shot, and once again the entire frame is saturated in red, from the fire in the background to the glow of the lightsaber in the foreground.

When Kylo orders the troopers to murder the villagers, the soldiers raise their weapons as the fire burns behind them. Their blaster fire is of course a ruby red.

FN2187 however does not fire. He hesitates and eventually lowers his weapon. As he does, the red around him grows more muted.

Later on the Star Destroyer, FN2187 removes his helmet and resolves to free Poe and escape the First Order. It’s a decision that comes as he stands in a crossroads between blue and…well this time it’s yellow, but you get the point!

As we are introduced to Rey, we see her scouring a crashed Star Destroyer, using a little blue light to guide her.

Meanwhile General Hux is introduced while his face is washed in deep red.

As the Falcon is being tractored, Finn assumes that it is the First Order that has captured them. The running lights of their capturing ship covers both terrified heroes in red…

…but as they prepare to hide, the light is overwhelmingly blue. It’s not the First Order that’s about to board the Falcon, it’s a pair of old heroes.

Han and Chewy enter the Falcon and from then until they run into Kanja Club, the cool blue of the ship’s interior overwhelms every scene.

At Maz’s cantina, Finn tries to run away from the coming fight with the First Order, by hitching a ride with this fellow, Sidon Ithano, nicknamed the “Crimson Corsair,” and the “Red Raider.” He represents Finn’s rejection of the call of the hero so of course he would be decked in red.

As Hux gives his speech to the First Order, the giant Nazi-like flag covers the screen in its red fabric.

Unlike the green lasers of the Death Star, the First Order’s super weapon fires a streak of red across the galaxy, destroying several worlds and killing billions in the process.

Han confronts his son on the crosswalk of Starkiller Base. The light we see shining from all around him is an evil red. Han is walking into a dangerous situation, but for the love of his son he goes.

Unlike Han, whose white shirt gives him a little bit of light. Kylo is dressed entirely in black. The red around him makes his face look like it is glowing with the evil color.

As Kylo tears up and confesses that he is being tempted (to the light) we see the red in his face extinguish, though not entirely. Han promises to help his son and reaches for Kylo’s lightsaber.

The light blue of the evening sky dims as the Starkiller weapon drains the last light of the nearby star.

As the last glimmer of light is extinguished…

Kylo becomes more menacing than ever. 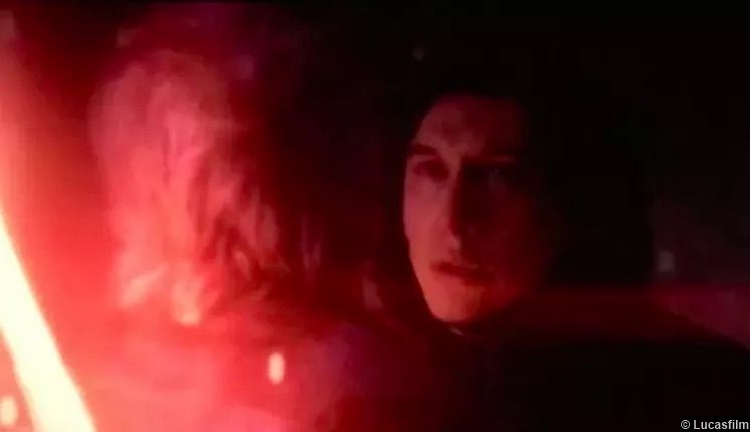 Kylo may yet be redeemed by the time the Sequel Trilogy is ended, but in this moment Han touches the face of a son he has lost.

On the darkened snow-covered planet, Kylo and Finn (and later Rey) battle, their lightsabers providing the only light in the area. Similar to Luke and Vader’s fight at the end of The Empire Strikes Back, the starkly contrasted colors of their blades provide all the visual clues we need to follow the darkened action.

As Rey finds Luke and extends to him his first lightsaber, the blue of the ocean covers the background. The final moment of the film is a tracking shot showing the two characters on the small island in the middle of the ocean. After so much red and evil had dominated the film, the movie ends with the assurance that hope has been found.

There’s a lot to take in when you watch The Force Awakens. But if you’re like me—a hardcore Star Wars fan—you’ll be watching it over and over for years and years to come. As you do, keep an eye out for all the ways JJ Abrams brought the story to life, by highlighting the eternal struggle between good and evil, light and dark, blue and red.