“Through the force…things you will see; other places. The future, the past…old friends long gone.”

-Yoda, The Empire Strikes Back

Coming exactly at the halfway point in The Force Awakens, viewers were treated to the Star Wars equivalent of a vision quest. It’s not the first time we’ve seen one, but it’s the first time we’ve seen one. We watched Luke experience one while meditating on Dagobah, but we only had his recollection to walk us through it (“I saw….I saw a city in the clouds…”). Here, we got to experience the sights and sounds alongside our heroine.

There was a lot to take in and a lot of it was jumbled and almost impossible to decipher, but let’s do our best because it may end up being one of the most pivotal scenes in the whole sequel trilogy.

It begins with the lightsaber. It’s the blade passed down from Anakin to Luke and was thought lost when Vader sliced off his son’s hand during their duel above Bespin. How Maz Kanata recovered it, when it was last seen flying past Luke (while he was hanging from the Cloud City antennae) down to the gas giant below, is never addressed. It probably never will be either, and Maz’ “a good question for another time” line was likely written just to make it mysterious without having to figure the details out.

Once Rey touches the saber is when things get trippy. I’ve provided some screenshots that are low quality but get the point across. 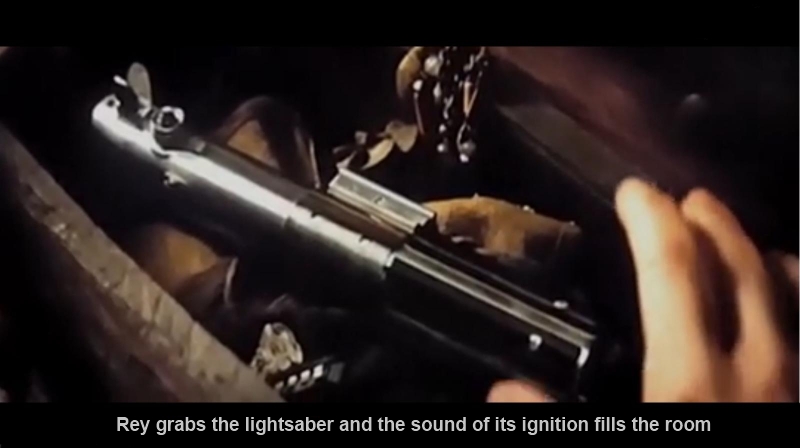 The sights and sounds of this vision have to be separated, because at times the sights match the sounds and other times they are very different. For example, the first thing we see is the area change from Maz’ basement to the Cloud City corridor that Vader and Luke dueled in. It’s the spot where Vader used the force to hurl objects at Luke, just before they took their fight to the catwalk outside. 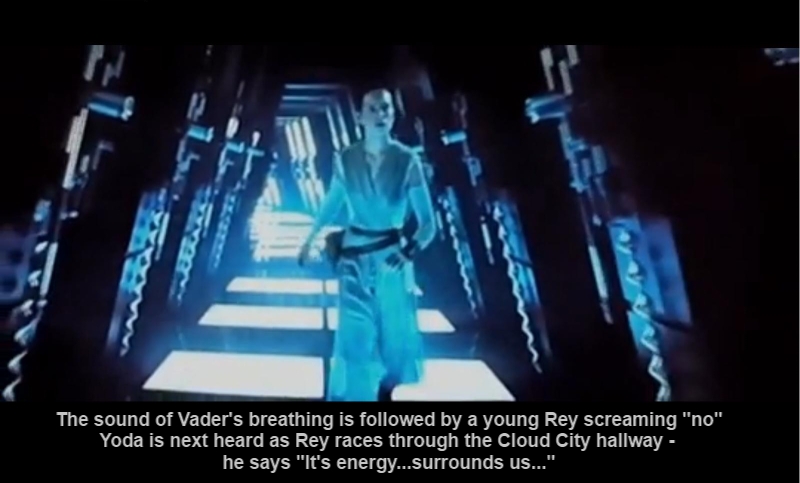 That’s the sight, but what about the sound? The first sound you hear is the ignition of the lightsaber. That is followed by—and this can be hard to discern, but it’s definitely there—the sound of young Rey screaming “No!”

After that, the corridor begins to break apart, and you hear Yoda’s voice repeating his line from his training of Luke about the Force. He says “it’s energy…surrounds us…” the line doesn’t finish, at least not initially. 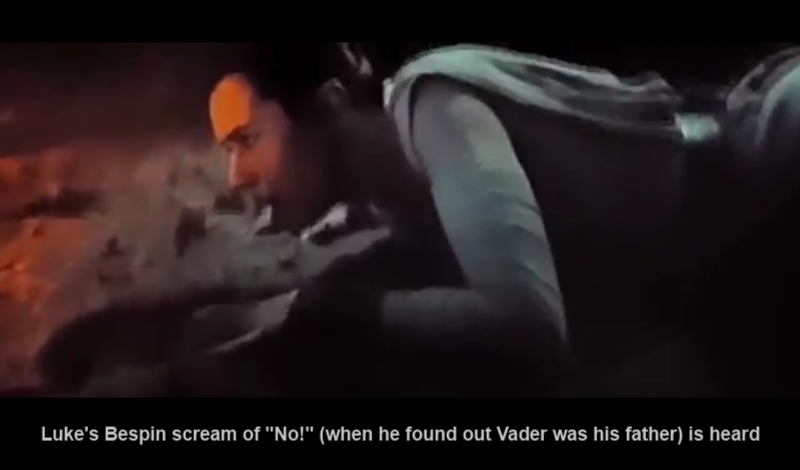 Everything collapses and Cloud City is no more. Rey loses her footing and lands on the ground. As she does the environment changes to what at first looks like a lava planet, but upon closer (and repeated) inspection, it seems instead to be an ordinary world. Rey has come upon a roaring fire. As the caption in the picture says, the sound we hear is of Luke screaming “No!” when he discovered Vader was his father. 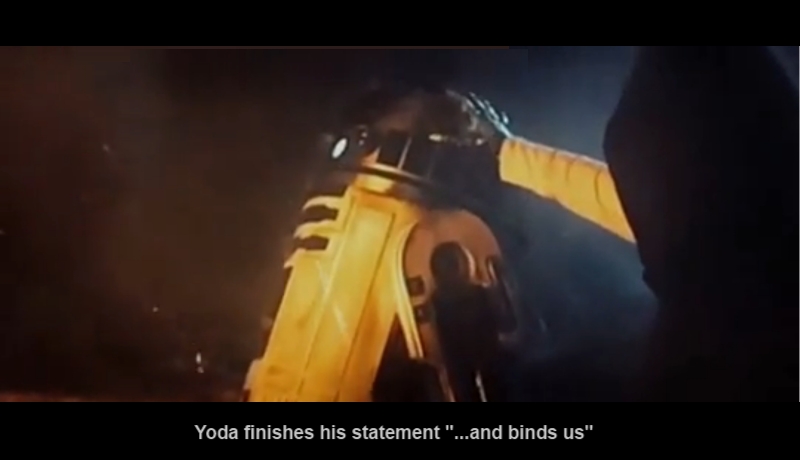 The background of the scene doesn’t change and the flashes of the fire and the burning embers tell us this is just another angle of the same scene. We see a robed figure touch R2 in a way that conveys comfort, as though the droid is sad. There’s no doubt this is Luke. His robotic hand matches the final scene of the movie, as does his off-white shirt.

It’s here that we hear the end of Yoda’s statement from before, as the old Jedi says “…and binds us.” Maz later described what Rey experienced as the Force calling out to her. It seems the way it’s doing that is not only through sights and sounds of her past and future, but also through some words of wisdom about the force from one of its greatest disciples. 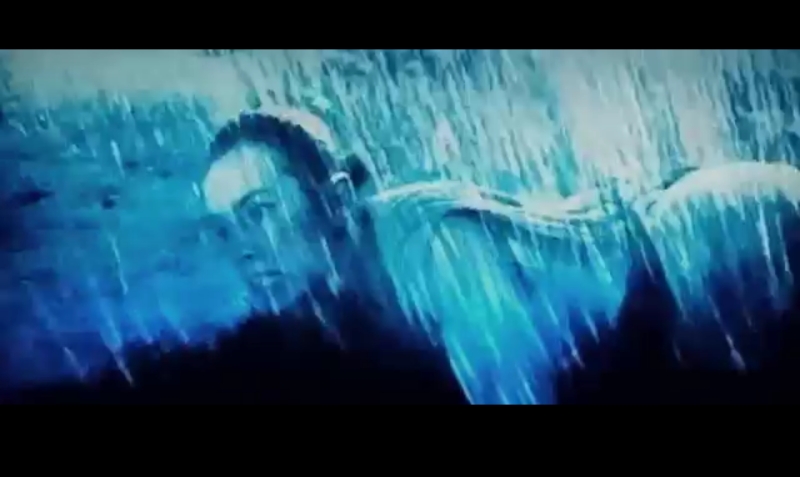 The fires leave us and the scene changes to a rainy night. There’s no detached audio clues here, just the sound of rain pelting the ground. Rey turns around and sees a man holding what looks like a medieval mace, ready to strike her down. Just before he does… 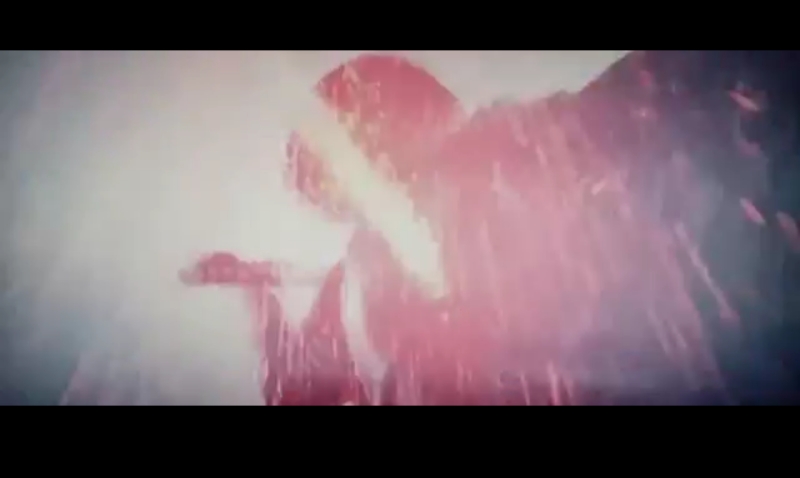 He gets run through with a red lightsaber. It shouldn’t be lost on the viewer (at least not the second time around) that this is the same manner of death that Kylo used to kill Han Solo. We’re seeing this from Rey’s perspective, and I think that’s important. The camera is about the change to a more neutral overhead shot, but here we’re seeing this through Rey’s eyes. 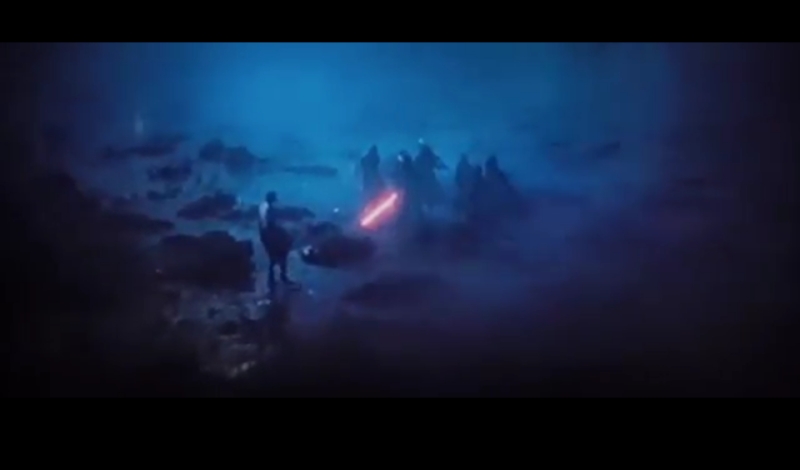 We get a clearer look at what’s going on and the sight is overwhelming. Dozens of dead bodies are spread across the ground and Kylo Ren stands prominently in front of a motley crew of unknown individuals. Are these the knights of Ren, of which Kylo is “master” according to Snoke? They are clearly taking a submissive position behind him, which means the individual Kylo killed in the previous frame was very likely among the group. Did he step out of line? Is that why he was run through with the lightsaber?

We can only speculate, but my theory is that he was a knight of Ren about to strike down Rey, but for whatever reason Kylo intervened and saved her life. It’s interesting to note that, on the rainy planet, Kylo shows no offensive posture toward Rey. The only time he does is at the end of the vision, which we’ll get to shortly. 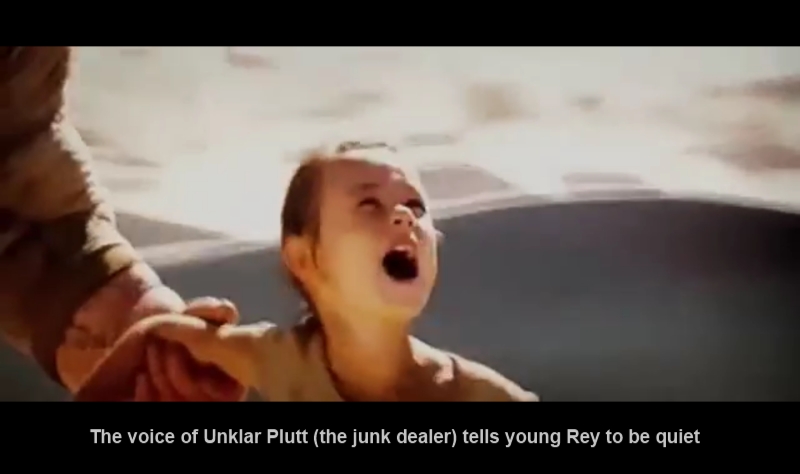 The source of the voice who says “quiet girl!” to young Rey (and I think there’s no doubt that’s a young Rey) is of some debate, but I think it’s clearly Unkar Plutt, the junk dealer to whom Rey goes to sell her scrap metal. The voice matches the large hand that’s holding her arm too. Why he’s got possession of her is anyone’s guess, but there’s clearly someone she loves on the ship that is flying away. Clearly Rey was left, but by whom?

Reading the novelization of the movie it is clear that Kylo knows who Rey is. When they are having their duel in the snow on Starkiller base, in the book Kylo at one point says “It is you” and the writer points out that it’s not the first time that Rey had the suspicion that people knew more about her than she knew about herself. Could it be that Kylo left Rey on Jakku as an act of mercy? Perhaps he killed the knight that was trying to kill her and decided to spare her life by hiding her. That of course raises more questions, for which I have no answers. Just speculation! 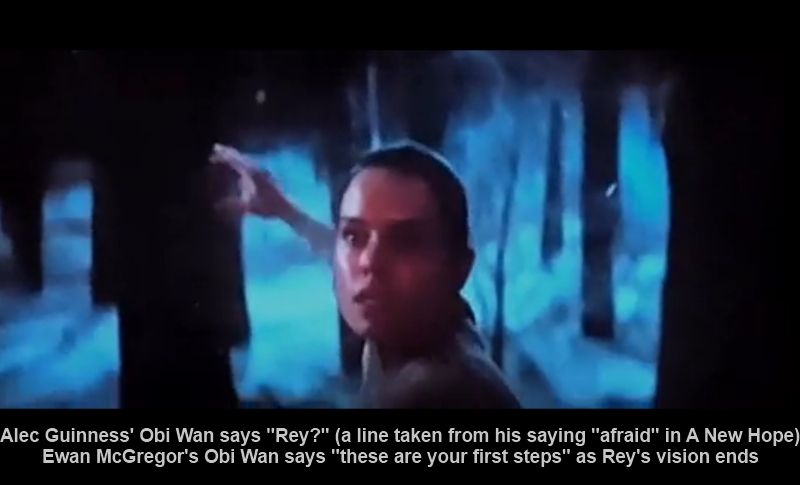 The scene changes from Jakku in the past to Starkiller base in the future. Rey witnesses the sunlight being extinguished (which would happen just before Kylo kills his father) and then from behind the snowy trees Kylo himself appears with saber ignited. Rey stumbles backwards and as she does she hears the voice of Obi Wan Kenobi saying “Rey?” It is interesting that JJ Abrams talked about how they edited down a clip of Sir Alec Guinness saying “don’t be afRAId” in order to get the word “Rey” and that he was so happy when he heard it because it was exactly how he wanted it to sound. So how did it sound? It sounded like a question. It sounded like Obi Wan, in tune with the force, was surprised to find Rey experiencing a force-induced vision. So many intriguing possibilities to explore with that.

As the vision ends, Rey stumbles backwards and falls on her butt. As she lands everything returns to the basement of Maz’ castle. And as she falls we hear again the voice of Obi Wan, only this time it is a new line recorded by Ewan McGregor: “These are your first steps” he tells her. Maz tells her that the Force is calling to her, but she refuses the call (in keeping with the Joseph Campbell rules of mythology). Later, in the snow-fight with Kylo she does finally close her eyes and “let it in.” When she does, the Force “Awakens” within her, guides her actions and helps her to fend of Kylo Ren’s attack.

The ending is exhilarating, but the real intriguing part of the film is the minute-long vision the force allowed her to see. It provided hints of her past, hints which hopefully will be explained as we go forward in the sequel trilogy.

If you have any theories about Rey’s vision, or anything you picked up on that was missed here (JJ and company have said that a lot was going on in the vision and that a lot of sound effects and voices were featured), let us know in the comments below!