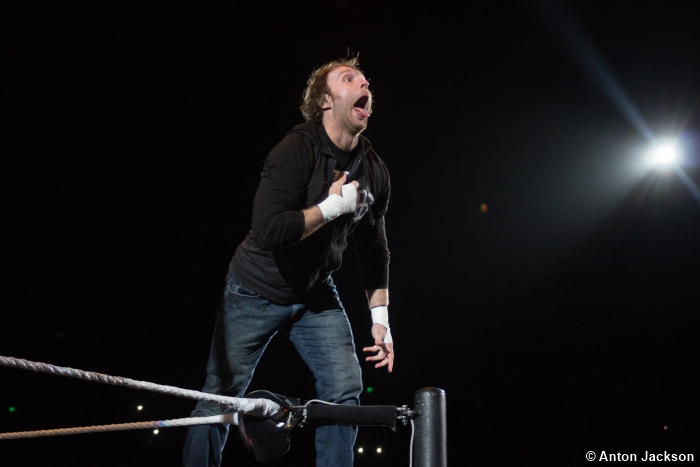 The WWE Draft this past Tuesday night may have forever altered the landscape of WWE, but there were still scores to be settled regardless of who belonged to which brand as the fourth annual WWE Battleground came to you, live on the WWE Network, from the Verizon Center in Washington, D.C. The Nation’s Capital would be home to a dream match for fans of The Shield as the three former members of The Shield would face off with WWE’s top prize on the line at Battleground. At WWE Money-in-the-Bank last month, Seth Rollins returned to in-ring competition and would challenge Roman Reigns for the WWE Championship and, on that night, “The Man” would make good on his promise to regain the WWE Championship that he never lost. However, moments later, Dean Ambrose would cash in his newly won Money-in-the-Bank contract and ultimately beat Seth Rollins to win the WWE Title for the first time in his career. Now it all comes down to Battleground where SmackDown Live’s #1 pick in the WWE Draft Dean Ambrose would defend the WWE Championship against his former teammates Seth Rollins and Roman Reigns in what is sure to be a Triple Threat Match for the ages!

Despite signing a contract to agree to no outside interference from his friends Luke Gallows & Karl Anderson during his one-on-one match with John Cena at WWE Money-in-the-Bank, AJ Styles would prove to be untrustworthy as Gallows & Anderson would get involved in the match, directly costing John Cena the match. This would lead to a new trend by The Club as Styles, Gallows, & Anderson would set out to “beat up John Cena” at any and all opportunities, but two Superstars would step up to join John Cena in his fight against The Club. Enzo & Cass would back John Cena up against the dangerous trio, but Enzo & Cass did not do it to save Cena, they did it to protect themselves from being victimized by The Club. Now these six Superstars are on a collision course for Battleground as the team of John Cena, Enzo Amore, & Big Cass face all three members of The Club in a 6-Man Tag match.

The crowd chant of “fight forever” has never meant more than it has in the rivalry between Sami Zayn and Kevin Owens. Originally best friends for several years, Sami and Owens seemed inseparable, but that was before they arrived in WWE. When Sami Zayn won the NXT Championship, Kevin Owens would come to the ring to, presumably, congratulate his best friend, but instead, Owens would viciously attack Sami and put him on the shelf for a number of months. Ever since then, Sami Zayn and Kevin Owens have made it their mission in life to derail their rival’s career, even if it meant sacrificing their own career in the process. However, these two bitter rivals would set out to put an end to their long-standing hatred for each other at Battleground for the sake of their careers as Sami Zayn would go one-on-one with Kevin Owens.

It has been nine long months since Randy Orton has stepped into a WWE ring following a shoulder injury in October and, with Orton’s return to in-ring action coming up next month at SummerSlam against “The Beast” Brock Lesnar, “The Viper” would make a special appearance at Battleground as Randy Orton would be a guest on Chris Jericho’s Highlight Reel. What will Randy Orton have to say about his time on the shelf, as well as his upcoming SummerSlam match against Brock Lesnar?

Since making her return on RAW, Sasha Banks has made it very clear that she wants the Women’s Title, but before “The Boss” can get a shot at Charlotte and the Women’s Championship, Sasha has had to deal with the added threat of Dana Brooke as Sasha has been on the receiving end of a beatdown from Charlotte and her protégé on more than one occasion. It would then become clear that “The Boss” might not be able to handle Charlotte & Dana on her own and, at Battleground, she would have the opportunity to take them down as Sasha and a partner of her choosing would face Women’s Champion Charlotte and her protégé Dana Brooke in a tag team match. Will Sasha find a tag team partner to combat this dangerous duo or will “The Boss” be forced to go it alone in another two-on-one situation?

After emerging as the unlikely winner of a battle royal on RAW to earn himself a shot at the Intercontinental Championship, Darren Young would get the opportunity of a lifetime as Young, with his mentor Bob Backlund in his corner, would challenge The Miz, with Maryse in his corner, for the Intercontinental Championship at Battleground! Will the tutelage of Bob Backlund lead Darren Young to his first singles title in WWE or will The Miz prove that Darren Young will never be “great again”?

Also at Battleground, the United States Championship would be on the line as Rusev, with Lana in his corner, would defend the prestigious title against a determined Zack Ryder as Ryder sets out to try and prove that he is capable of bringing the United States Championship home to the United States of America. After coming up short in a tag match at WWE Money-in-the-Bank, the friendship between Natalya and Becky Lynch would implode as Natalya would attack Becky from behind, later claiming that she turned her back on Becky because she needs to start looking out for herself, but that hasn’t stopped “The Queen of Black Hearts” from attacking Becky on more than one occasion as these friends-turned-rivals have sparked fights at the mere sight of each other. This all leads to Battleground where “The Irish Lass Kicker” Becky Lynch will go one-on-one with “The Queen of Black Hearts” Natalya.