So when I say “Wii U’s last killer app” of course I haven’t forgotten about Zelda, but I have a hunch that will be released for NX as well, as the Wii U. So as for exclusive Wii U games, Star Fox Zero might just be the last big franchise title Nintendo has.

And it’s so disappointing.

I’m not necessarily angry at this game; I am just very disappointed. I don’t want to write too much about it here (I’ll give this thought its own article later) but I feel like Nintendo has lost perspective. The company seems more focused on forcing the player to do something different than they are on just creating a game that is fun to play, even if it is “traditional.” Innovation is great. Experimentation is good. But when those hinder the gameplay the result is a failure. You can’t say “well at least they tried something new” if what is “new” isn’t actually “fun.”

And that’s the biggest problem with this game. It is a chore to actually play.

But let’s back up a bit. Star Fox Zero is the first new installment in the franchise in a decade. The last game in the series was Star Fox Command for the Nintendo DS. Having said that, the franchise hasn’t been entirely dormant. There was the 3DS remake of Star Fox 64 in the interim, so it’s not in the same boat as say, F-Zero, but it has been a while since we’ve seen it on the big screen.

According to Nintendo itself, one of the reasons it’s taken so long to get a game on the Wii U is because the company was not sure how to reintroduce the franchise with a gimmick that would justify its purchase. This is the same excuse the company has given for not releasing a new F-Zero game (we haven’t seen one of those on a home console in thirteen years). From their perspective a game can no longer simply be a game. There must be some new gameplay innovation attached to it to warrant the development. The great exception are games featuring Mario, who has seen little innovation in his Kart series, Party series, Tennis and Golf series, and such like. But for their secondary franchises, the Big N obviously thinks a gimmick is needed.

So a gimmick we shall have.

I’ll come back to the control scheme (which is at the heart of Zero’s gimmick), because even if the game controlled perfectly (it doesn’t, by a long shot), the game would still be a disappointment if only because of how lazy it is. Obviously the actual control gimmick is not lazy; a lot of work went into trying to implementing it. The problem is, not a lot of work apparently went toward anything else. The game features a lot of the things the Wii U does well: bloom lighting, stereo sound from the gamepad, no framerate drops, no load times. Dig under the surface, however, and you find a lot that is wanting.

First of all the story is lazy: It features the same plot as was featured in Star Fox 64 back in 1997, which itself was a quasi-remake of Star Fox for the SNES (released in 1993). And sure, the plot of a video game is rarely ever a breaking point, especially in a shooter such as this, but when the three most hyped games in the franchise (sorry Star Fox Assault) all feature the same plot, with the same planets to explore, it’s a little much. 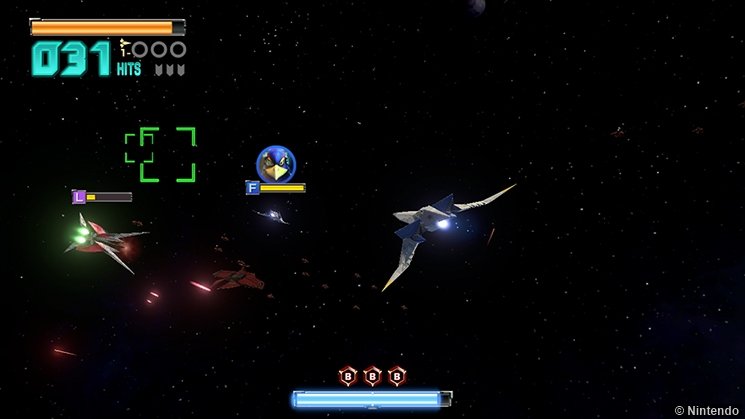 Second, while the audio is very good from a technical perspective, the dialogue in the game is very poor compared to Star Fox 64. I compare it to that old game because the comparison is too easy to make; the game features dialogue ripped straight from the earlier title. There is new dialogue too, but what’s baffling is the way it is implemented. At times Peppy will inform me of a tip using some new dialogue and then ten seconds later tell me the same tip using dialogue lifted from Star Fox 64. Was this done just to pad the script? Was it supposed to be an homage to the previous game? Whatever the thinking was, it didn’t work and it would have been better to just feature the new dialogue. Reusing the old just felt lazy.

And then there are those things that were in the earlier game that should have been featured. How is it that Star Fox 64 could have four player dogfights but this game only features “co-op” play? I suppose you can’t have a traditional local multiplayer mode due to the system only being linked to one gamepad, and the fact that the awful control/camera angles force you to use both the gamepad and your TV screen simultaneously. That said, there is a way to do multiplayer. It’s not hard. It’s not even novel anymore. It’s called ONLINE GAMING!

Everyone thought Nintendo had finally embraced the present with Splatoon. That game was the best multiplayer experience Nintendo had ever developed. But when it comes to Star Fox it’s back to the stone age. What’s funny is this game’s controls are so nearly-broken that you almost need two people to play it properly, so the co-op multiplayer mode is actually quite good. It’s just a shame that Nintendo has refused to move with the trends in even this one little area.

As for the controls, they are, as I said, nearly broken. Gone is the instantly accessible scheme from the original title, that was adapted perfectly to the N64’s controller. The old scheme was simple: One button to fire, one to boost, one to break and one to launch bombs; the shoulders tilted your vehicle to the left and to the right. The D-Pad/control stick moved you around the screen. That’s it. No problems. It was designed in an era when Nintendo wasn’t obsessed with reinventing the wheel. This was in the era when Nintendo put all their creative might behind level design and tight game mechanics; the only focus they put on the controls was to make sure they were responsive and not clunky or cumbersome. 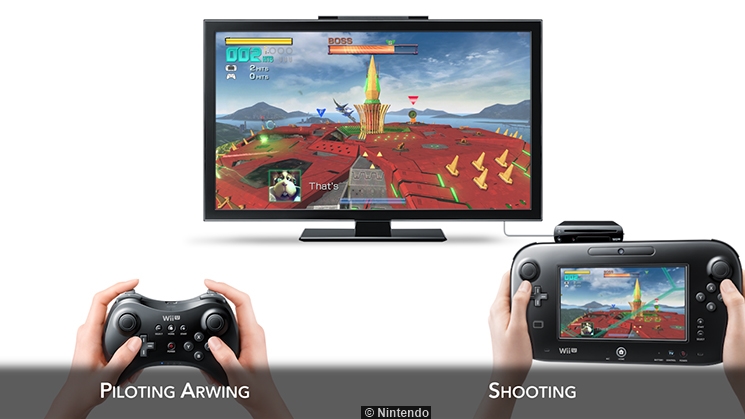 Now we have a Nintendo that puts its focus on the controller, and though some games have been helped by motion control (Splatoon for one, FPS games for another), the manic space fights in Star Fox have not been helped. Basically you have to steer by moving the left stick around (but the camera isn’t locked-in behind your craft), you aim by moving the gamepad around, and your boost and break are moved to the right stick. Launching bombs is also cumbersome, as you have to press the right stick button, usually resulting in accidental boosting or breaking at the same time you fire. The aiming reticle frequently gets off-centered forcing you to readjust it (by pressing the left stick button). In the middle of a dogfight this can be the difference between hitting a trio of enemies or crashing into the side of a mountain.

And if you want to ensure any kind of consistent accuracy in your shooting you are basically forced to keep your eyes glued to the gamepad. Sometimes cutscenes will interupt your missions and will play out on the TV while the game is still happening on the pad. More than once I crashed into an enemy battleship because I was looking at the TV screen and didn’t realize my ship was still flying. So again, you either need another set of eyes watching the TV for you, or you just need to forget about the TV entirely. And while off-TV play is a godsend for things like Virtual Console games and Mario Maker, when I’m playing a big epic game like Star Fox I’d like to be able to look at my big TV screen.

But that’s Nintendo for you. Their thinking is so backwards that the entire gameplay experience is like playing the result of developers trying to fit square pegs into round holes. At some point along the way during development, someone should have said “Mr. Miyamoto, this doesn’t work: We can’t have a game whose controls make it not fun to play.” But here we are, with a game where the “newness” of the experience trumped the “funness” of it. In fact, it often feels like the difficulty the game needed to focus on (swarms of enemies, boss fights with weakpoints, etc) was dumbed-down in order to accommodate the clunky controls, making for a game whose difficulty is based around how hard it is to “handle” and not how challenging it is to “play.”

Nintendo also fell into the same trap that ruined the great potential that Namco’s Star Fox Assault for the Wii had. The flying portions in Assault greatly evoked the fun of Star Fox 64, but too often you were forced to leave your Arwing and take to the ground, where the gameplay was a lot less exciting. And while Star Fox 64 also had a few missions where you weren’t in control of your Arwing, there were only three or four of them and they were all very well designed. Zero’s non-Arwing levels are a chore. Worst of all offenders is the Gyrocopter, a slow aircraft used in stealth-based levels that have you maneuver through narrow corridors in order to reach various access panels that your robot buddy (voiced by what sounds like one Donald Duck’s nephews) hacks into in order to turn off force-fields, shields, spotlights, etc. It’s simplistic gameplay, lacking in challenge, slow and boring (and long) to get through. The other new vehicle doesn’t fare much better. The “chicken walker” lets your convert your Arwing into a two-legged mech unit that scurries around enemy bases. This is an idea that would have worked very well with Star Fox 64’s controls and on-rails design. In this game, however, with two-screens required to maneuver your craft and fire your weapon, the controls feel more like the Tails missions in Sonic Adventure 2, and that’s just about the worst thing you can say about video game controls.

Are there bright spots? The graphics are pretty, though nothing revolutionary. The music is very good, when you can hear it; a lot of times it is drowned out by the near-constant chatter from your wingmen and other NPCs. The art-design is Nintendo’s usual high quality and the worlds are vibrant and colorful. But it used to be that Nintendo fans mocked Playstation players for their pretty graphics and broken controls. Nintendo fans used to pride themselves on saying “the Big N may not have the best looking games, but it does have the best playing games.”

And now we have Star Fox Zero, and all I can say is “It’s good looking, but not good playing.” 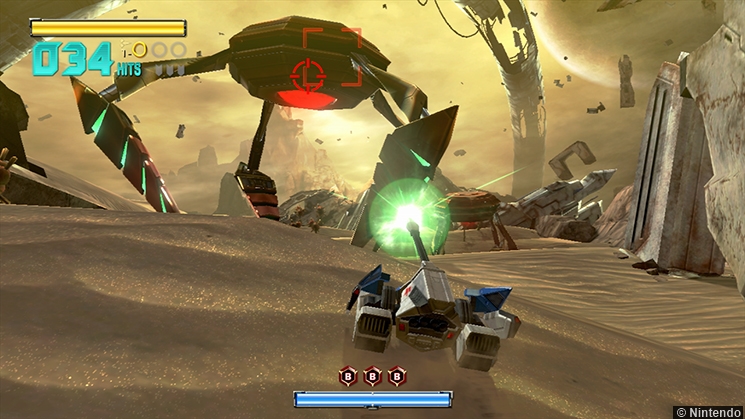 5/10 – Broken controls/camera, forced-gamepad use, and a virtually non-existent online presence all outweigh the nice enough visuals and sound design. If this is the WiiU’s last “killer app” the console is going out with a whimper.