It’s time for our annual discussion on Roman Reigns’ push

It’s time for our annual discussion on Roman Reigns’ push…and why it (again) isn’t working. Barring a (pleasant) surprise, like, say, Dean Ambrose winning at FastLane, it looks like WrestleMania 32’s main event will be Triple H defending the WWE Championship against Roman Reigns. This makes Reigns only the 4th man to challenge for the WWF/E title in back to back years. Shawn Michaels did it at WrestleMania 11-12, Steve Austin did it at WrestleMania 14-15, and John Cena did it at WrestleMania 26-27. There’s no rhyme or reason or any lesson to learn from those three men, except that they are arguably the top guys of their eras (you can argue Bret was top guy in the New Generation era, but that’s a quibble). Michaels lost his first challenge and won his second, Austin won both and Cena won his first and lost his second. There’s no pattern there. 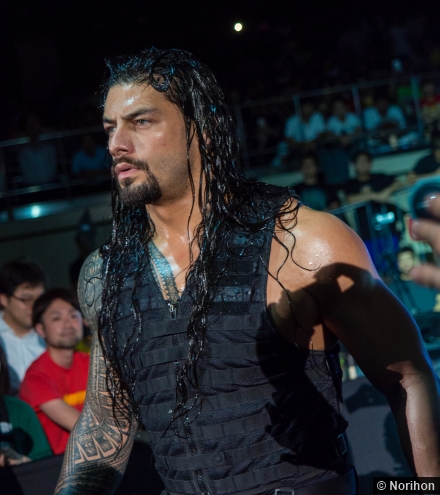 Again, the only thing they all had in common was the company’s focus on them as top guy, and the same could be said for the guys who have defended the WWE title in back to back years (Hogan did it at Mania 2-3, Cena did it at Mania 22-23). But is Reigns a guy on the level of any of those? Is he the certified megastar that Hogan or Austin were? Is he the unquestioned top act in the company like Cena? Is he the best star they’ve got like Michaels was in the mid-90’s? He doesn’t seem to be any of those things. He has a good look and shows flashes of promise in the ring, but that’s about it. The only reason Reigns is in the company of those men is because…he’s in the company of those men. Wrestling’s a manufactured sport with manufactured wins and losses, streaks, and accomplishments. If Vince wants Reigns to be in a list along side HBK and Stone Cold, he will be.

But that’s the big disconnect between Vince and the fans. Fans—who generally like Roman—don’t see him on that level. Vince has to be aware of this, considering the reaction he—again—got at the Royal Rumble. That Vince doesn’t care is the real issue. But that’s for another time.

What we’re talking about is Roman Reigns, a performer who seems to be in the midst of another push, too much, too fast, despite a fan base that is grumbling about it at best and outright resisting it at worst.

Last year’s problems, starting with Survivor Series 2014 are now infamous. Roman Reigns suffered an injury not long before the show. Do you remember the show? The big selling point was Team Cena vs The Authority. It’s the show that ended with Sting’s debut. In the match, after Cena was eliminated all hopes for the good guys rested on…Dolph Ziggler. Thanks to Sting, Ziggler scored the winning pinfall and became the hero of the company.

And then he was forgotten. It was weird, it seemed like they were building to something special with Ziggler (again) and (again) pulled the rug out from under him. Why? The reason became apparent soon after: Ziggler’s spot as hero was originally planned for Reigns. With him out injured, Ziggler was just the replacement hero. By the next PPV, TLC, Reigns was back in front of the cameras announcing his intention to enter the 2015 Royal Rumble. It was an awkward promo, featuring Reigns’ forgetting his lines and looking lost. Fans grumbled and the grumbling grew louder as the 2015 Rumble approached.

We all know what happened next. Daniel Bryan was unceremoniously eliminated, which angered the fans who wanted to see him win the event. Roman entered soon after to a showering of boos, with fans angry at him for being the handpicked top guy and not the guy the fans wanted to be the guy. Ya dig?

The fans’ anger only intensified as he ramped up his feud with then-champion Brock Lesnar. Lesnar had become a monster babyface without even trying, due to his special appearances wherein he would maul and suplex to half death whomever he was paired against. Reigns never had a chance to win over any supporters. At Mania 31 every Lesnar suplex was met with thunderous applause (I was there and was a part of the suplex city grand opening); any time Reigns went on offense you’d think he was Triple H circa 2000. 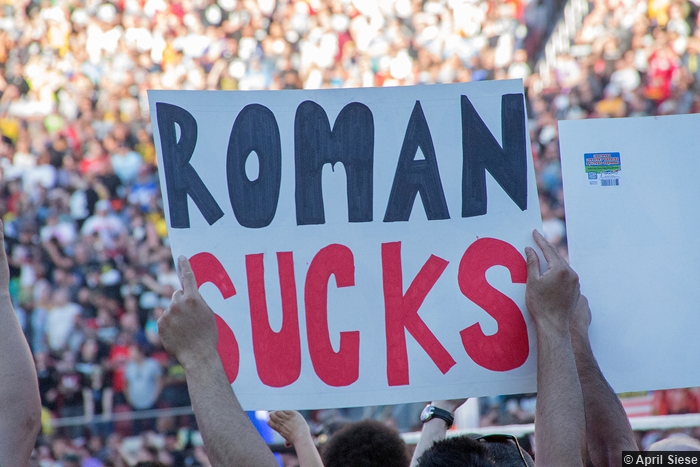 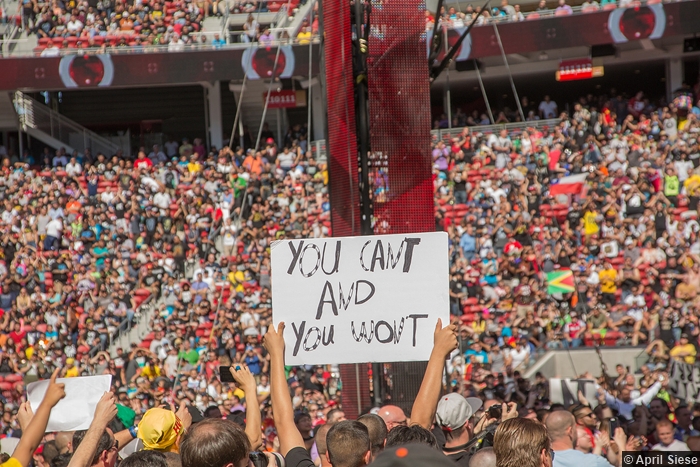 After Seth Rollins won the title and entered a feud with Randy Orton, Reigns moved away from the title picture. As that happened the fans started—slowly—warming up to him. He put on some fun brawling matches and seemed to find his groove as a performer. It didn’t hurt that the time away from the main event meant he wasn’t cutting as many long promos, which protected his rough-around-the-edges speaking ability.

But Vince is nothing if not stubborn. As Spring turned to Summer Reigns started inching closer to being back in the main event picture, and as he did the fans grew restless with the idea of his ascension to the top of the roster. It’s like static electricity on your arms and fingers in the winter. You know if you touch the lightswitch you’re going to get a shock, but you are just compelled to do it. That’s Vince when he wants to push Roman Reigns.

At Survivor Series 2015 Reigns finally was to have his first WWE title match since WrestleMania, but we know what happened. Seth went down and the tournament was added instead. What’s interesting is how many fans—the ones who are usually critical of Reigns—suddenly were on board with his winning the title. The only caveat was, those fans wanted to see a heel turn. Instead we got a babyface Reigns win, followed by Sheamus blah blah blah Reigns wins it back as a babyface and everything is as Vince wanted it.

Vince already had to change plans (on the day of WrestleMania 31) once to accommodate the fans unrest, this time he was sticking with his guns. Reigns is going to be a babyface champ whether we like it or not. The way they are pushing the story this time is by giving Triple H the belt, ala Rock in 1999. He’s the heel who stole the title from the rightful champion and now the vengeance-seeking babyface has to conquer his foe in order to reclaim his title. That’s a great story and it worked great with Austin at WrestleMania 15. The problem is Reigns isn’t Austin. Not by a longshot. The fans just aren’t buying it.

What’s the real problem? Despite WWE’s thinking, their audience isn’t filled with total idiots. Viewers can pick up on it when something is off, even if they can’t put their finger on it. We’ve been a TV watching people since the 50’s. With that comes a sixth sense to know when a TV plotline isn’t working (again, even if we can’t specifically point out why it isn’t working). With Reigns, the problem is the push defies logic, and again, even though this is WWE we’re talking about, the show still has to obey its own internal logic. Sure it can have pretend fighting and face/heel swerves at the drop of a hat, but the internal logic has to remain consistent, and with Reigns it doesn’t.

With Reigns they’re trying to book him as the anti-authority rebel of sorts. It’s not the first time they’ve done that with a babyface. Just go back in history.

With Austin, the storyline was Vince didn’t want him as champion because Vince and co. didn’t want a beer swilling redneck representing their brand.

With Rock, he was getting in the way of the son-in-law that Vince wanted as champion, and he was also slut-shaming Vince’s daughter. Plenty of motive for hostility right there.

Cena never had to deal with the authority figure in any meaningful way (which has always been part of his appeal problem with the older demographic, in my opinion).

Bryan was presented as a midget with a beard in a company filled with guys who look like Randy Orton. Vince and Triple H had great reason to be against Bryan.

Reigns is…Cena with a tan. There’s simply no reason not to want to push him, from a storytelling perspective. Sure Reigns beat up Vince and Triple H but that came later. They were already against Reigns when that happened. There’s never been a logical reason for the Authority to be against Reigns.  Why wouldn’t they want him as champion?

If WWE writers were good at nuance, which they are not—at all—then they would really embrace this so-called “reality era” and make the story something grounded in reality. If they made the story “Vince doesn’t want Reigns to be the champ because he has zero personality” that would instantly make Reigns’ weaknesses a virtue and might actually give him some character depth. That would be too meta for WWE, though. So we’ll continue to get convoluted, go-nowhere plot devices. 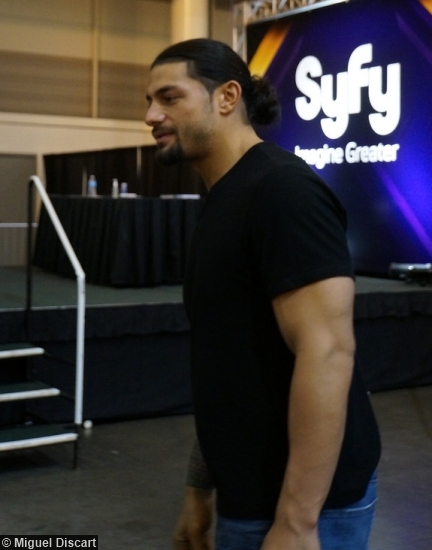 In the meantime we’re on the cusp of what WWE wants to be the biggest WrestleMania crowd ever. They’ve been decimated by injuries with none bigger than losing John Cena, who will miss being at WrestleMania, possibly in any capacity, for the first time since he debuted not long after Mania 18. So it’s understandable that they’ve felt the need to turn to Triple H to give the title some credibility. The problem is Triple H isn’t going to get booed in his feud with Reigns. Triple H from a decade ago might (but then again he was cheered against Cena at Mania 22 a decade ago). But for sure this Triple H—the man behind NXT—is not going to be booed by a WrestleMania crowd against Roman Reigns.

So we come full circle, back to a discussion on Roman’s push and how WWE is doing it all wrong. Again, WWE could always surprise us and have Ambrose main event. That would be something and the fans would be behind Ambrose if they did. But more than likely Vince is going to be his stubborn self and will shove Diesel 2.0 on us after all.

And we will complain on the internet when he does.