Shawn Michael, aka The Heartbreak Kid, is known by many names; The Showstopper, The Main Event, (arguably) the greatest in-ring performer in WWE history and, of course, Mr. WrestleMania.

From his big-show debut at WrestleMania V as part of The Rockers with Marty Jannetty through to his career-ending battle with Undertaker at WrestleMania XXVI, HBK has been involved in some of the stand-out matches from the biggest show of the year.

WWE, for this first time ever, chronicles the WrestleMania legacy of one of its most tenured stars as they present almost every WrestleMania match from the illustrious career of Shawn Michaels. From his emergence in the tag-team division through to his runs as Intercontinental and WWE Champion his final epic confrontations with Undertaker that ultimately led to the end of his active career. 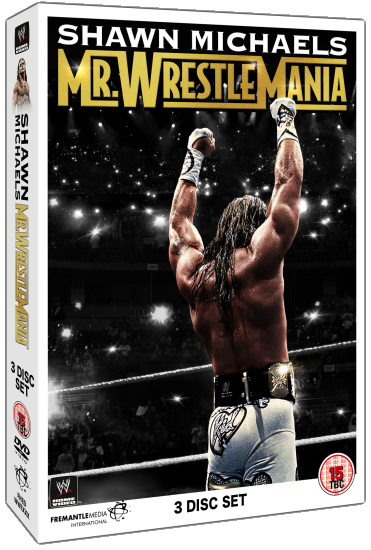 Some would argue that Hulk Hogan is Mr. WrestleMania due to him being at the forefront of the very first WrestleMania and then headlining WrestleMania II, III, IV, VI, VI, VIII and ten years later with X8, while also being involved in the main-events of IV, IX.

This is a great little history lesson for the newer fan to find out what all the fuss is about when it comes to Shawn Michaels. As Jim Ross stated in his commentary for WMXIV, no-one outperforms Shawn Michaels in a big match environment and the latter half of this series ably provides evidence to support that claim.

However, it’s interesting to watch the first half of the match anthology as it clearly shows a wrestler coming into his own and being slowly built towards main-event status over a number of years. When today’s fans look at someone in the vein of Big E. Langston or Dolph Ziggler and think that these guys are “mid-card for life”, it is worth taking a look at the history of Shawn Michaels. No-one during the run of The Rockers from 1989-1991 would have dragged you aside and said that “this guy” is not only going to be the WWE Champion, he is going to down in history as one of, if not THE, greatest in-ring performer in company history.

Of course, that is exactly what did happen and this selection of matches, interspersed with comments from the man himself, chronicles his journey from tag-team specialist to a top-level Intercontinental Champion (when the belt truly meant something) on to his boyhood dream coming true at WrestleMania XII and beyond.

Each of the three tag-team matches that open the show are enjoyable, with the chemistry between The Rockers and The Orient Express being overlooked by many, many fans (after watching this, you could do worse that look up their match from Royal Rumble 1991) and the WrestleMania VII opener against the Bobby Heenan-led team of Barbarian & Haku (who would go on to become The Faces of Fear in WCW) is a fantastic “little men v big men” battle.

From 1992 onwards, it’s singles-matches all the way as the now-heel Heartbreak Kid had turned on Marty Jannetty (in one of the best turns ever executed) and gone solo. His first course of business as a heel at WrestleMania was to face El Matador in the opener of WMVIII; which El Matador, as Tito Santana, had done at the very first evert seven years earlier.

After winning the IC strap from The British Bulldog on the last ever Saturday Night’s Main Event (at least until the show was revived in 2006 for a short run), Michaels had created a cocky character that caught on really quickly. The addition of Sensational Sherri was the final piece of the initial puzzle and on to WrestleMania IX we went as HBK opened the show for the third year running; this time against the undefeated Tatanka in a defence of the Intercontinental Championship. In a widely-panned show, their bout was warmly received with the exception of the cop-out finish.

From there, things pick up as WWE’s New Generation were in full swing and WrestleMania X would alter the course of WWE history as The Ladder Match made it’s televised debut on WWE television.

Shawn Michaels was the WWE IC Champ, but had been stripped of the belts for not defending it within an allotted time. Cue the WWE President, the esteemed Mr. Jack Tunney, announcing the stripping and declaring there would be a 20-Man Battle Royal, with the final two facing off in a singles match the following week to become the new champion.

Razor Ramon and Rick Martel were the final two and the veteran put his much larger opponent over in grand style, only for Shawn Michaels to return and declare he was still the rightful champion as no-one had actually defeated him for the belt. Still toting his own title belt, HBK’s claim at least had some merit and it was decreed that things would be settled at WrestleMania X in a Ladder Match. Both belts hung up above the ring and the first man to grab both would be the undisputed champion.

Nowadays, we know what to expect from our Ladder Matches, but back in 1994 we viewed the world with much more innocent eyes. The addition of Diesel to the mix (Sherri had turned face a while back) created a new dynamic as Michaels would run his mouth and have the 7ft monster backing him up to stare down any trouble.

As we all know, even if you have never seen it, the WrestleMania X Ladder Match was an instant classic and still remains eminently watchable today. The spots and little nuances created by these two guys can be seen through the years (especially if you watch either of WWE’s Ladder Match collections) and the triumvirate of The Hardys. Edge & Christian and The Dudleys have a lot to thank Razor and Shawn for.

The set marches on and we enter the WWE Championship section of the anthology as friends from WrestleMania X become opponents for WrestleMania XI when Diesel defended his title against his former best friend and the Royal Rumble winner, Shawn Michaels.

The match is a let-down in the grand scheme of things and the first genuine misfire of Shawn Michaels’ ‘Mania run. It’s not a bad match per se, it’s just not a particularly good one. Sid as the replacement bodyguard is wasted, as is Jenny McCarthy and Pamela Anderson as the ringside escorts (Anderson especially looks like she is wondering what she is doing there and whether she is being paid enough to fake enthusiasm).

Speaking of underwhelming, the same can be said for the much-hyped Iron Man Match from WrestleMania XII. Again, not say it was a bad match, it was just a rather boring one until around the last 15mins (with the exception of Tony Chimel being superkicked early doors). Having no falls in regulation time was a mistake and the post-match Sudden Death period was clumsily handled and explained. Still, our man had reached the top of the mountain and an image for the ages was ingrained in our memory along with a genuinely stirring call from Vince McMahon on commentary.

Having missed WrestleMania 13 because he couldn’t turn his frown upside down, a back injury incurred at the Royal Rumble 1998 virtually ended Shawn’s career and he elected to bow out after passing the torch to Steve Austin in a great match at WMXIV. In hindsight, you can see the pain Michaels was in and the performance, under those circumstances, is nothing short of miraculous.

But wait a minute; what’s that? In just over four years he’ll be back and be better than he ever was? Don’t be stupid.

Had you asked us in 1998, after being told that Shawn had retired from in-ring activity because of his back injury, whether we thought he’d come back for another run, we might have said that perhaps a nostalgia run of a few weeks, but no big bumps and possibly only a superkick to some unfortunate sacrificial lamb in a segment on RAW.

If you had told us that Shawn Michaels would return at SummerSlam 2002 and steal the show against Triple H, then go on to enter the first-ever Elimination Chamber and WIN the World Heavyweight Championship, we would have locked you up in the same looney-bin WCW sent Ric Flair to… but that’s exactly what happened.

The match against Angle is slightly overrated, but the Jericho match is just amazing, the Vince bout is a minor miracle (although, to be fair, McMahon rarely has a bad match), John Cena had arguably his best WM match, hearts were genuinely breaking as he retired Ric Flair and, of course, his career was capped of with two absolute blinders against Undertaker as he tried to break the streak.

Normally with a career anthology like this, you can’t really watch all the matches in a row because déjà vu sets in and it all gets a bit samey, but with this set you don’t really get that. Part of this is down to the varied styles of the opposition, but also because of the time-frame covered and that we see tag-matches, PPV openers, PPV main-events, mid-card title matches, main-event title matches, show-stealing grudge matches and two career-ending classics.

After watching this set, it’s hard to argue that Shawn Michaels truly is Mr. WrestleMania.