By Clarkey
Classic WWF Reviews
This page contains affiliate links. At no additional cost to you, we may earn a commission if you click through and make a purchase. Learn more

Quite obviously the best thing about the ‘Tagged Classics’ series of DVD’s is that for a inviting price you get to relive and bask in some decent nostalgia from two back to back PPV affairs from consecutive years, or if not enlightened by the featured events before gives you the chance to experience what either your youthful self regrettably missed, or for other reasons you weren’t tuned to the TV set or setting the VCR the first time around. When you couple this with the inclusion of an event featuring one of the defining moments in the World Wrestling Federations history, and a crux point in the Monday Night Wars of way back when; then it makes this package doubly exciting. Of course that event is the heel turn of the Goldust, shunning his countries needs and more importantly a tag from Vader to walk out and set foot on a new trail to glory. Yes I kid, but this review does seem to be a minefield waiting for the words ‘screw’ and ‘job’ to rear their heads and it to cloud over the rest of what is on offer here. 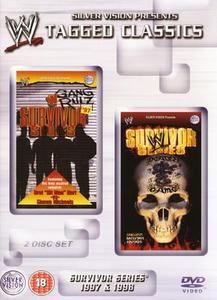 Importantly, beyond the handy work of misters Michaels, Hart and McMahon at the end point, you have the opportunity to see the climax to a feud that defined the company at the time and still lives on to this day as one of the best, and the DVD itself offers up a great summation in the form of the original ‘Free For All’ from the Survivor Series 1997 PPV airing. This aids those that were not lucky enough to be engrossed with the feud first time around, and for those that were graced with the chance through their later years the chance to remember the trigger points that built to what occurred. Putting aside the side of matters outside of the ring with the obvious controversy, the actual build of the feud towards this match was absorbing and frankly I was hooked personally and that was despite having no great love of Shawn Michaels and while appreciating Bret Hart was not as obsessed with him as I probably should have been, something I corrected in later years and put down to the innocence of youth. Perhaps the Ironman Match itself would not have gone down into the folklore of the wrestling industry without the ending, but the feud itself and the credibility of the title would rightly have lived on and has to this day. Frankly with the feud of Austin and Owen Hart tagged along in ’97 the company was in a good state, and it just makes one ponder what could have happened had Hart stayed put, had all the controversy never occurred and the company carried on with the potentially good build they had going. With Austin returning after his neck injury caused by Owen’s botch at Summerslam, and thus the storyline build of Owen mocking Steve until his inevitable return in this resulting match for the Intercontinental title; coupled with the long feud SCSA had had leading up previous with Bret himself, they could have had these four going at it at the very top. The match itself was far from a showstopper; six minute tosh to be truthful but taking in all the history building to the IC match and the atmosphere it adds to affairs and makes it a worthwhile watch, and another corner stone in the creation of the icon that SCSA became, although not a real reference point for the career of the late Owen himself. But back to what could have been with the four possibly competing at the very top, that was a never was, and never will be and we’ll just have to be content with what we have here and satisfyingly that is more than good enough.

One thing that is always highlighted with these ‘Tagged Classic’ releases, and rightly so, is how intact the actual productions remain in proximity to their original airing. The WWF logo’s and insignia remain intact, as well as the references and it just adds so much more to the package and allows the viewer to truly enjoy this trip down history lane with no real grievance. Yes, when one couples the two PPV’s offered here, beyond the inevitable attraction around certain events that occurred and certain matches that stand out, there is a hell of a lot of filler. But importantly and particularly in the case of Survivor Series ’97 we are presented with a real tribute of what was the attraction of the original Survivor Series concept; the traditional Survivor Series matches; and if you are able to put aside the niggles, and try to suspend belief with your Sports Entertainment lovers hat firmly on, it is a lot of fun. The Truth Commission, The Godwinn’s, D.O.A…happier times when we would sit and enjoy whatever we were presented despite it being obvious drivel now, and this was just ’97. Cringeworthy moments do spring up and it can be hard to get as involved as one did in their youth, but even looking at matters from a comedy standpoint, although obviously not as they were intended I would challenge anyone not to enjoy the entrance of The Truth Commission themselves, let alone the frolics of the afore mentioned Godwinns.

This is before we even get to the 1998 side of affairs, ‘Deadly Games’. Better events did take place in ’98 with a personal preference of my own being the KOTR of the same year , but the tournament for the then vacant WWF title was worth the watch alone even with some of the stranger participants and some of the odd moves as it moved from paper to ring to screen. With the WWF trying to maintain some of the shock value from the previous year with that certain event that occurred involving a job that didn’t include HHH and pedigree, they went with simply recreating the previous year with different folks but not an entirely different stroke. I’m sure it was pictured amazingly in the minds of those behind it, as they finished their games of darts against a Polaroid of Bret Hart, but in all honesty it put a dampener on what was the match of the card and built for what would be an exciting feud between Foley and The Rock in the future. Putting the cynical hat on, all of the tournament matches beyond the main event (despite it’s finish) could have been Raw filler, let alone gracing a Survivor Series PPV; but with the allure of it being a tournament again if one is to put aside the obvious smark internet fan gripes brought on through recent years it is easy to get caught up in the build and put aside the actual quality of affairs. It is probably best to brush aside the Women’s title match offered as it is harmless enough, but then that is the problem, as you have no real reason to be giving it a re-watch; and tag match between the New Age Outlaws, The Headbangers and D’Lo Brown and Mark Henry wasn’t really anything to write home about, so it is just the Deadly Games tournament itself that really allures from the package on offer. If you put to one side the shoddy mystery opponents, and look into the three hours as one long-winded story with a not so great end point, but an end point that in it’s fruition lead to some interesting twists and turns in the future years; the Deadly Games stands the test of time. Frankly as part of this double package you just cannot go wrong with this, and like 1997 the overall package makes up for most of the wretched personalities and combinations on offer.

Nothing really in the way of extra’s, but they really aren’t necessary when coupling in what is offered overall within the two PPV’s packaged and the afore mentioned Free For All which helps to build the cards in an effective way. Overall, taking the positives from both PPV’s, it makes this a very worthwhile package for everyone. Even if just to warrant your purchase by thinking to ones self how nice it would be to have one set of DVD’s containing two superstars performing in their prime, a collection of stars setting the groundwork for their future stardom, and a flux of ‘Sports Entertainment’ mishaps in the form of some gimmicks and booking decisions; you cannot really go wrong with this package as there is always something that springs up to encourage another watch, even if just to create a ‘Should not have happened’ Youtube piece. While the Best of Survivor Series DVD offers a better collection overall of the good, we can always forget the fun that can be had with the bad side of matters and how they are not always an awful watch with the right mindset. With as in previous Tagged Classic collections all of the PPV’s in as close to their original state as possible, it is more than inviting to relive the past and remember why we were so hooked during the 97-98 period. In summation, a decent purchase for all and a worthwhile watch for every budding Sports Entertainment fan.