In front of over 72,000 people, the (actual) 25th Anniversary of WrestleMania was a better show than the previous year’s effort (which is essentially viewed as having only one saving grace – HBV v ‘Taker I), with more than half of the matches being really good, the rest being alright… and one easily walking away with title of “Worst! WrestleMania! Match! Ever!” – thank you Comic-Book Guy. 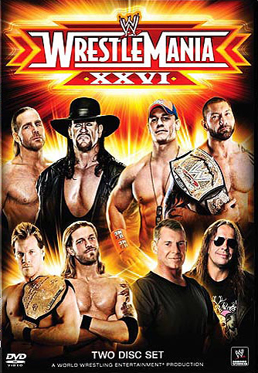 Opening with a wide shot of three military jets performing a flyover of the outdoor arena and featuring an awesome mid-ring circular LCD screen, the stall is set out early that WWE want you to know that this is a big deal.

WrestleMania, even to the majority who are jaded to the product in general, is the one event where hopes get built up, where everyone tunes in to see that one moment where the stars align and something special happens that will live in infamy for all time. Hogan slamming André, Warrior winning against Hogan, Savage ad Elizabeth in 1991, Bret v Owen, the rise of Steve Austin, Hogan v Rock, Austin v Rock x3, Benoit and Eddie, Flair being retired, etc, etc.

We all want that to happen as we watch it live, we want to feel that passion as something truly memorable unfolds before our eyes. WrestleMania XXVI had two of those moments, one good, the other downright horrid.

Unlike previous years, the show doesn’t open with the Money in the Bank match but rather with a complete waste of a Tag Team Championship battle due to the pitiful time allocated to the contest. The rest of the undercard got a better shake of the stick, even if the Legacy implosion fails to live up to the expectations we had when the wheels were first put in motion. The MitB is a huge improvement over WM25’s (although there are too many people involved), with the usual array of stunts, including a stunning shooting-star-press from the ladder to Christian and Kofi stilt-walking on a broken in half ladder. Oh, in case you’re wondering, WWE haveedited the footage at the end to save Jack Swagger’s blushes.

Following on, it’s the first singles match of the night as Sheamus has his biggest match to date against Triple H. The run-in build was very well done, with a sterling job (as always) from the WWE production team with the pre-match hype video. Credit must also go to WWE themselves for pushing Sheamus and keeping him strong. He genuinely doesn’t look out of place in a WrestleMania grudge match against a former multi-time WWE/World Champion and bout against Triple H is a lot better than anyone would’ve expected. The fact that the rivalry continued afterwards and the way in which it continued shows that WWE have long-term plans for the Irishman.

Inspired by Avatar, Rey Mysterio has an excellent encounter with CM Punk, with the stipulation that if Mysterio lost, he had to join the Straight Edge Society. Unfortunately, because there was constant rumours of an eventual Hair v Mask Match, the result wasn’t really in doubt, but getting there was a lot of fun.

The complete opposite of a lot of fun was up next. Considering it had 13yrs of legitimate build, real emotion and the fallout from the most infamous night in wrestling history, not to mention a great video before the match took place, Bret v Vince should’ve been the easiest sell in the world. That it became a complete mess, went on far too long (why this was given over 10mins when the opener didn’t even get 5mins is a mystery) and was wrong on every single level is possibly the biggest disappointment I’ve known as a wrestling fan. In all honesty, everyone should pretend that this match never existed. Just press skip and move on to the next chapter on the DVD.

Ordinarily, Edge v Jericho would also have been considered a (mild) disappointment, but following on from the debacle of Hart/McMahon, it was elevated to a better level of quality. The match itself is decent enough, it just doesn’t seem to kick into gear before the finish, which in itself comes across as flat and “oh, was that it?”

Closing the first disc, the women get the chance to have their moment in the sun as TEN of them take part in a huge tag match. It’s no secret that I think Maryse is stunning and at ‘Mania she doesn’t disappoint, with Kelly Kelly stealing the glamour crown for the face team. The match itself is OK for what it is, but Vickie Guerrero deserves a special mention for her Hog Splash and overall work that added another argument to the pro-Vickie side of the fence.

The second disc features the last two matches on the card and both of them are great. First up, John Cena challenges Batista for the WWE Championship and their power-based offence gives us an outing that easily surpasses what was expected of them both (much like the time Cena faced off with Lashley a few years ago). I sound like a broken record, but the pre-match video is astounding and gives a fantastic edge to the rivalry.

Following on from that is the match of the night by a country mile. Undertaker v Shawn Michaels stole the show one year ago (which, to be fair, wasn’t hard to do), so expectations for this was off the charts. From the moment the match first entered the consciousness during the Slammy Award ceremony where HBK accepted the trophy for the 2009 Match of the Year and turned to leave, only to turn back and sow the seeds for a rematch, the build was phenomenal. Undertaker saying no to a second go around, Michaels vowing to win the Rumble but falling short in heartbreaking fashion, Shawn then saying he’ll go through the Elimination Chamber to get at Undertaker only for Orton to foil his plans and then the implosion of DX before Michaels decides to interject himself in the Elimination Chamber Match and superkick ‘Taker to cost him the World Championship. From there, it was just a matter of time and when Undertaker added the retirement stipulation, the excitement level went off the scale… then the WWE production crew put together arguably the greatest hype vignette in living memory to leave us simply awestruck.

The fact that the match lived up to the hype is probably the most amazing aspect of all, with an evolution of their last encounter and some fantastic counters and exchanges. The closing moments are as tense as you could hope for and the after-match show of respect for Shawn Michaels (and his reaction to it) is genuinely touching.

Disc 2 has a lot of extras, most of which are matches featuring the inductees to the Hall of Fame this year. The first match is the traditional pre-show Battle Royal which is pretty much the same as every version of this match you’ve ever seen. Highlights are Santino hitting The Cobra and Mike Knox’s amazing running crossbody smash.

Hearing Gorilla Monsoon on commentary made me smile and it’s worth watching the Mad Dog Vachon match just for that. The piledriver that ends the bout also deserves a mention. The first thing that captures your attention in the Richter/Moolah match is Wendy’s totally ridiculous earrings. They really are a product of the era and make me glad fashion has moved on.

One of the more surprising inductees, Antonio Inoki, defends the “Japanese Heavyweight Championship” against a guy called The Great Hossein. Not many will recognise the moniker, but as soon as he starts speaking, you’re left in no doubt that you’re about to see the future Iron Sheik in action.

It’s fascinating to watch Gorgeous George as a lot of us will have heard of him, but very few of fans will have seen him compete. So far ahead of his time he’s be futuristic today, George was a revelation in the 1950s and it’s easy to see why, in that era, he was the most watched man on television. Of course the match itself is very basic, but I’d love to have seen Gorgeous George in his prime compete today.

Finishing off the extras is the fun match from WrestleMania VI between DiBiase and Jake Roberts. “The Snake” cuts an amazing promo before the bout begins and it’s interesting to see how little Jake actually does in his matches yet gets a brilliant reaction. Every wrestler should study Jake Roberts and try and absorb as much of his psychological talents as they can. Knowing what to do and when to do it, knowing what not to do and when not to do it, little movements and mannerisms, the man is possibly the greatest mind wrestling has ever had and it’s a damn shame the business can’t or won’t take advantage of it.

Disc 3 is the Hall of Fame ceremony itself and it’s a flatter affair than previous years, but it’s still worth a watch for Bob Uecker, Stu Hart and Ted DiBiase.

A much better show than last year and another stellar DVD release from WWE. The matches are, for the most part, worth a repeat viewing, with the main event being an absolute blinder of a back-and-forth contest. It’s also worth owning so that if you ever complain about a match sucking in the future, you’ll have Vince v Bret to convince you it’s not as bad as you first thought.

The extras are a notch above the norm, even for a WrestleMania release, with six complete matches and the obligatory Hall of Fame ceremony to boot.

All in all, this is a purchase that’s really good value for money.