This is the now standard annual Wrestlemania multi-disc release. The entire Wrestlemania 22 event is here, spread over two discs. I would imagine that most wrestling fans will have already seen this event, but if you are one of the few who haven’t, here’s a brief synopsis. 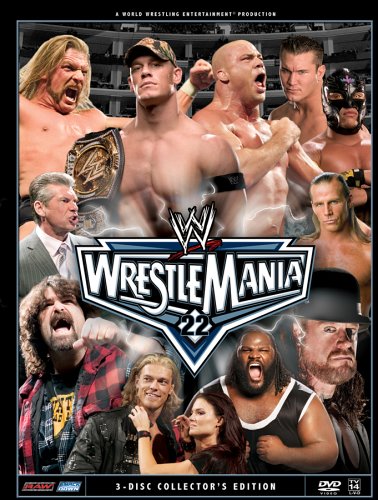 Disc 1 Chapters: 16 chapters, featuring the first part of Wrestlemania 22. These are entitled:

Disc 2 Chapters: 5 chapters, featuring the second part of Wrestlemania 22. These are entitled:

Big Show & Kane vs Carlito & Chris Masters wasn’t much of a match, but a decent opener. Kane was being heavily protected at the time, due to his ‘See No Evil’ movie that was about to be released. Carlito and Masters teased dissension after the match, leading to Carlito’s face turn the next night on Raw.

The Money In The Bank Ladder Match was an excellent match, featuring strong performances from all six wrestlers involved. Some tremendous high-flying, and jaw-dropping stunts involving ladders in this match. Probably the best match on the show.

Chris Benoit vs JBL for the U.S. title was a good match. Benoit did a great job carrying JBL, and JBL himself was no slouch either.

Mick Foley vs Edge was an incredible hardcore match. Both guys took an unbelievable amount of punishment, using an array of weapons to deliver stiff shots and offence. The finish of the match was a tremendous visual spectacle.

Boogeyman vs Booker T & Sharmell was a horrible match, easily the worst match on the card. At least it was only four minutes in length.

Trish Stratus vs Mickie James was a good match. The crowd totally turned on Stratus the babyface, and surprisingly, heavily cheered Mickie, including several instances of ‘Lets Go Mickie’ chants.

Undertaker vs Mark Henry was surprisingly decent. Undertaker had his working shoes on, including doing a dangerous-looking spot where he dove over the top rope on to Henry, outside the ring. Henry even went up for the Tombstone at the end of the match, and you don’t see many 400 pound men willing to do that spot too often.

Shawn Michaels vs Mr McMahon was a very entertaining streetfight match. Basically all Michaels, with Vince taking the majority of the punishment.

Kurt Angle vs Rey Mysterio vs Randy Orton was a fast-paced good match that really needed to be much longer, as it had the potential to be a great match. Nine minutes simply wasn’t long enough for it. Huge crowd pop for Mysterio’s sentimental title win at the end.

Torrie Wilson vs Candice Michelle was just a buffer match between the two title matches. I understand why they booked this, but I personally would rather have seen these four minutes added to the Mysterio match.

John Cena vs Triple H was a great main event title match. Both guys got extremely elaborate ring entrances. Triple H’s ring entrance consisted of playing on his ‘King of Kings’ moniker; rising through the entrance stage whilst sitting on a throne, dressed as ‘King Conan the Barbarian’. John Cena’s entrance consisted of a special video playing on the theme of Chicago gangsters in the 1930’s. The ring entrance ramp elevated, allowing a 1930’s style vehicle to make its way to the ring. Several men (including CM Punk!) dressed as gangsters paraded around the ring with toy guns. Cena then made his entrance, shooting a toy rifle into the air. The match itself was excellent; featuring unbelievable crowd heat with a heavily pro-Triple H tone.

The extras are what most people buy the Wrestlemania DVD set for, and watching the unseen footage on this set, I wasn’t let down. Amongst the highlights for me were:

– On Disc 1, all the vignettes are from the Raw’s leading up to Wrestlemania.

– The 18 man ‘Raw vs Smackdown’ Interpromotional Battle Royal featured: Eugene, Viscera, Goldust, Gene Snitsky, Tyson Tomko, Lance Cade, Trevor Murdoch, Matt Striker, Super Crazy, Psicosis, Funaki, Stevie Richards, MNM, Road Warrior Animal, Simon Dean and William Regal. It really isn’t much to write home about. Michael Cole and Tazz call the match (won by Viscera) and blatantly make fun of how bad it is. At the end of it, Cole says, “I was hoping this would go on for another 15 to 20 minutes!” and Tazz replies, “One of the best battle royals I’ve ever been apart of!”

– On Disc 2, there is the Wrestlemania post-game show, a 15 minute show that originally aired on WWE.com after the ppv had gone off the air. It features interviews with both Shawn Michaels and John Cena, plus Kristal Marshall interviewing fans exiting the arena, and asking completely inappropriate questions, such as “Which WWE Diva should be the next to pose for Playboy?” (to what looked like an 8 year old boy) and, in reference to Sharmell being kissed by the Boogeyman earlier in the night, “Would you have liked to have kissed the Boogeyman?” (again, to what appeared to be a 10 year old boy).

– Mick Foley getting stitches backstage after his match was kind of interesting, as was Rey Mysterio’s backstage celebration after winning the title. Both of these clips were ‘shoot’ footage, with Mysterio being congratulated by Batista, Chris Benoit, Chavo and Vicki Guerrero, and his Rey’s own children backstage.

– There is also footage of John Cena addressing the Chicago fans is a short promo from after Raw went off the air on April 3rd.

– Also on Disc 2 is the entire edition of Saturday Nights Main Event, that aired on NBC back in March. It was a pretty decent show. Most of the show is booked to hype the upcoming Wrestlemania, so it was a good choice to include.

– Disc 3 featured the entire, uncut three hour version of the 2006 Hall of Fame Ceremony, held the night before Wrestlemania. It’s a really enjoyable show, although some of the speeches drag on forever. Bobby Heenan presented the Blackjacks with their award. Heenan was his usual hilarious self. Blackjack Lanza rambled on and told a bunch of unfunny jokes and stories. Blackjack Mulligan was better. He didn’t make a lot of sense, but he was fired up and quite emotional in his speech. Greg Gagne inducted his father. Greg was surprisingly good value and was fairly entertaining in his speech. Verne was brief, which was good. He’s an elderly man now, so it was good to see his achievements recognised. John Cena inducted William ‘The Refrigerator’ Perry. Cena was heavily booed coming out, but managed to turn some of the crowd with a decent impression of NFL announcer, Howard Corsell. Perry was brief in his speech. Ted DiBiase inducted Sensational Sherri. DiBiase was awesome in his introduction, coming out to his old theme music and throwing money to the crowd. Sherri’s speech was like a car wreck. It went on forever. She kept responding to the catcallers and hecklers in the crowd. She did this at least five or six times, which was a bit silly as she was giving them the attention they desired. She made some interesting and very entertaining remarks that really need to be heard to be believed, and Eric Bischoff (seated in the crowd) makes a surprising and amusing appearance during this segment.

SD Jones (1980s jobber) inducted Tony Atlas. Jones was another speaker who rambled on forever, for no particular reason. He seemed a nice man though. Atlas delivered a very good, moving speech about the adversity he had overcome in his personal life. Hulk Hogan inducted Mean Gene Okerlund. Hogan played to the crowds chants of ‘One More Match’ and ‘Hogan-Austin’. He delivered a nice speech about Okerlund, and Okerlund himself spoke well, telling some fun stories. Chris Benoit, Rey Mysterio and Chavo Guerrero inducted the late Eddie Guerrero. The threesome all spoke movingly about the impact Eddie had made on their lives. Vicki Guerrero and her two daughters accepted the award on behalf of Eddie. Vicki also made a moving speech. In the finale, Stone Cold Steve Austin inducted Bret Hart. Austin also sold the ‘Austin-Hogan’ chants with an amusing aside. Bret Hart delivered a pretty good, lengthy speech, in which he told lots of funny Owen Hart prankster stories. Overall, it was an entertaining three hours. Only a few minutes of the Bret Hart speech actually aired on tv, and the uncut version lasted around thirty minutes.

As a whole package, I highly recommend it. Wrestlemania itself is a great show worth watching. For the Hall of Fame Ceremony alone, it is worth purchasing. The extras on the DVD set are really worth checking out, and the inclusion of the entire Saturday Nights Main Event show is a great bonus as well.

Two thumbs up from me.