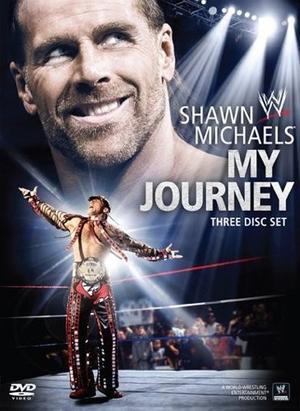 Shawn Michaels is one of the most charismatic and talented athletes in the history of entertainment. For more than 20 years he has wowed crowds, earning accolades, championships and numerous monikers, including “The Icon,” “The Main Event,” and “Mr. WrestleMania.” Now, for the first time ever, Shawn Michaels sits down and in an intimate interview retraces his early days in Texas through his Rocker tag-team partnership in AWA and WWE through his multiple reigns as WWE Champion. Shawn Michaels: My Journey offers surprising insights and absolute candour as he relives the highs and lows of his historic career. Over 20 amazing matches from the 80s, 90s and 2000s —most available on DVD for the very first time — demonstrate why Shawn Michaels is truly “The Showstopper.”

Two years ago, WWE released a three-disc collection on The Heartbreak Kid and it was very, very good. That, for a lot of people, would make a second three-disc set redundant… but not Shawn Michaels. The sit-down interview with Michael Cole covers a lot of topics and you get the feeling that both men are genuine friends with the way the interact, laughing and joking around as they do. The actual wrestling content, for the most part, is new stuff, with some familiar opponents, but unfamiliar or forgotten matches.

Starting out with Shawn’s television debut, it’s hard to imagine the skinny 19yo kid getting his ass handed to him by a legitimately scary One Man Gang would go on to become one of, if not THE best, in-ring performers in wrestling history. The often-told story of how he met Marty Jannetty and formed The Midnight Rockers in the AWA gets a new slant with two matches from the AWA archives. A PPV outing against their most heated rivals in the promotion, Doug Summers & Buddy Rose shows us that these two weren’t a one-match legacy and, secondly, a rarely seen title defence against a slim and buff Nasty Boys.

From there, it’s WWE-a-go-go, with amazing early encounters against The Brain Busters and The Hart Foundation showing us that WWE used to know what it meant to have a healthy tag-team division, while singles outings against Bret Hart, The British Bulldog, Sycho Sid and The 1-2-3 Kid show how good he was, even in the early years of his singles run, against the myriad of styles employed by his opponents.

All of the action is interspersed with candid comments from Shawn himself as he discusses almost every aspect of his wrestling career and personal life. HBK talks openly about his family too, showing us that he’s a changed man from his days causing havoc in the mid-to-late 90s. Of course, there’s going to be those who are cynical of what he says, feeling that they’re empty words said only to put Shawn in a good light, but, personally, I’d like to think he’s being mostly honest in his statements.

The second disc is split between the year before he suffered what many thought was a career-ending back injury in 1998 and the years after his legitimately miraculous return in 2002. The matches shown on this disc are, once again, rarities when it comes to WWE DVD releases and include a nice bout against Mankind on RAW, the Casket Match that caused all the back problems and, from the post-return time-frame, his stellar outing against Chris Jericho at WrestleMania XIX (a match that Shawn says convinced him that he could actually wrestle to a high standard once more) and the awesome (if every so slightly overrated) epic against Kurt Angle. Again, these segments are broken up by the sit-down interview and, like before, these parts of the collection are really worth listening to. As an aside, it’s interesting to note that there isn’t a single segment that covers his rivalry with Steve Austin. I found that strange.

Finally, on the third disc, we get more of the same, but in this case, that isn’t a bad thing. The matches are top notch (with only the Boot Camp Match dragging it down a little – and, like Austin being omitted, it’s weird that this is the only match against Triple H on the set), with the storylines surrounding the last three really elevating them to iconic status and the finish of the Four-Way being a master-class in psychological booking.

Closing the set with his almost life-altering match against Undertaker at WrestleMania XXV is the perfect way to go out, showing as it does that, in his twenty-years in WWE, he’s still got it when it comes to between the ropes. Sure, during the first six or seven years, he wasn’t main-eventing, but he was still putting on fantastic matches and, for whatever reason, against Undertaker, it always comes together.

Greatest ever? It’s hard to argue against it.

A few things missing from HBK’s career, but, to be fair, they have been covered elsewhere. Nothing on Steve Austin and very little on his feud(s) with Triple H aside, this is a fairly comprehensive run through the career of Shawn Michaels, all the way from his first televised mauling to his show-stealing turn against Undertaker at WrestleMania XXV. The sit-down interview is really well done and, in a shocking turn, Michael Cole isn’t annoying in the slightest. In fact, I’d go so far as to say Cole is “out of character” during the interview and lets it flow naturally.

This is a stunning companion piece to Heartbreak & Triumph with hardly any cross-over material between the two releases. The choice of matches span every level of Shawn’s career and highlight his versatility, while the man himself seems humble and willing to praise the talents of those across the ring from him as well.

I reviewed this immediately after the John Morrison release, which is apt considering there are those with the viewpoint that Morrison is HBK’s successor. But the difference in their DVD collections is like night and day. I cannot recommend Shawn Michaels: My Journey enough; it’s a fitting tribute to a great career… and one that takes on even more significance now that Michaels is officially retired for real.

Do yourself a favour, but this as soon as you can – you won’t regret it.