Bret Hart and Shawn Michaels; two men who pretty much shared a career path in professional wrestling… as well as the most infamous moment in the sport on their combined resumé.

Both men started in their local promotions before moving on to bigger pastures. Both men made their name initially in the tag ranks before proving to the world they could mix it up in the singles ranks by bagging the Intercontinental Championship. After that, both men went on to defy the “you’re too small” jibes and reached the pinnacle of this great sport; the WWF Championship. Through it all, even though they had other rivalries, Bret and Shawn always seemed to find their way back to each other until that fateful night in November 1997 when the business changed forever.

Now, with all the water under the bridge, “The Hitman” and “The Heartbreak Kid” are ready to discuss what it was really like to live through these stellar careers and just how much they of the feud was real.

It’s WWE Greatest Rivalry as you’ve never seen it before. 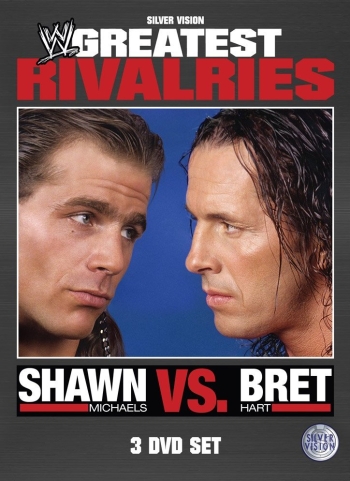 Fourteen years ago (do you feel old yet?), the wrestling landscape was changed forever when Vince McMahon decided to screw Bret Hart in Montreal at Survivor Series. To those who weren’t watching at the time and have probably sat through enough retreads to last them a lifetime, it might be hard to fathom just how huge a deal this was.

However, it’s unfair to both wrestlers to take have that be the defining moment of their careers and it’s a credit to the way this has been put together that The Montreal Screwjob, while discussed at length (it was all Triple H’s idea), is just the (rather looming) footnote to a rivalry that lasted almost a decade.

Jim Ross does his best Parkinson and the tone of the piece is super-serious pretty much throughout, but to hear from both men at the same time and, surprisingly, take their fair share of the blame for things escalating from a worked feud to real-life animosity is rather refreshing.

This chronicles both their paths to WWE and through the promotion until Bret Hart left in November 1997. Shawn’s tag success, mid-card singles success and the main-event WWE Championship run were all pretty much a re-run of Bret’s career, albeit HBK waited longer for his first chance on top. Even their exits from the company were only a few months apart.

“The Hitman” does still come across as a bit whiny at times and the “I respect you” banter does get tiresome, but it’s a candid look behind the curtain and WWE couldn’t have picked a better pairing for what is hoped to be the first release in a new series.

The closing moments, looking at their careers post-2000 is stark to say the least. It seems that the careers were in sync until Shawn’s 2002 comeback. Bret never recovered from his concussion then stroke, while HBK overcame what was considered a career-ending back injury to come back and put forth the greatest run of top-drawer matches any wrestler has ever been involved in.

Wrestling is a cruel business, but life kicks its arse in that regard.

The latter two discs have eight complete matches, two Hall of Fame inductions and Bret Hart’s return to RAW in 2010.

All of the matches (with the exception of the Wrestling Challenge one – it’s too short to really matter) are good-to-great, but the stand-outs are the tag-match from Japan and the stunningly good WWE Championship Match from Survivor Series 1992. The infamous Iron Man Match really could’ve done with a few falls, but you can’t fault the effort of both guys to go for an hour and pull out moves from their respective arsenals and avoid much repetition.

Both inductions are great too, so the extras are, for the most part, very enjoyable to sit through a second time and a great history lesson for the younger fans who missed them first time around.

First things first, this set loses a point for not having the title match from Survivor Series 1997 on it (unless you buy the Blu-Ray). Considering it’s the focal point AND the final act in Bret Hart’s in-ring WWE career, to omit it completely is either extremely short-sighted or just plain stupid.

The interview itself is very candid, although you do have expect Bret and Shawn to make-out in front of JR with the amount of sucking up they do to each other at various points. That being said, however, it’s still a really good interview that errs on being too serious but also gives us a valuable insight into possibly the most famous real-life rivalry in pro-wrestling.

Of course, this is where the problem lies for WWE though; where do they go from here? There are plenty of on-screen rivalries that the company could put forth to feature in the hoped-for second release, but none of them bring the in-built intrigue of a genuine “these guys legitimately hated each other” vibe.

I mean, WWE could easily feature Triple H v Rock, Triple H v Foley, Rock v Foley, Austin v McMahon (it did have it’s own DVD, but the sit-down interview part could add a new dimension), Austin v Rock, Edge v Cena, Edge v Matt Hardy, Hardys v E&C, Undertaker v Foley or Undertaker v Kane would work, but only Matt v Edge could bring real-life ill-feeling to the mix… and a mid-card feud would be unlikely to make the cut. A sit-down WWE v WCW with McMahon and Bischoff could work too I suppose.

Also, with the two protagonists, some matches where they both feature but aren’t specifically against each other would’ve been nice. I, for one, wouldn’t have minded seeing Undertaker v Bret from Summerslam ’97 or Bret v Rick Martel for the IC title again.

This is a very good release with a very interesting premise that’s very well executed. As a closing chapter to a piece of history, it’s close to perfect.

Also, if you buy the Blu-Ray version, you get the following additional content -: