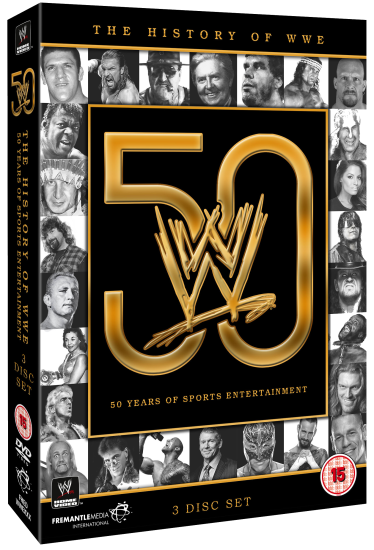 Whichever name it had when you first tuned in and whichever name you call it now, it is an inarguable fact that Vince McMahon’s sports-entertainment empire is the biggest wrestling promotion in the world. This three-disc DVD collection chronicles the history of WWE from the early days of Jess McMahon, through to Vince McMahon, Sr. and Vince McMahon, Jr’s journey to global domination in their chosen field.

Combining archive footage with (mostly) relevant talking-heads, the main documentary goes into detail regarding the sale of the company from father to son and then Vincent Kennedy McMahon’s ambitious plans to set aside the long-standing territorial etiquette of the day all the way through to the company’s hopes and ideas for the future.

Featuring some never-before-seen footage from behind the scenes and some candid comments on the more unsavoury incidents (specifically the early-90s steroid scandal), this is a look at how WWE came to be the pinnacle of professional wrestling; to the point that if you simply say the word “wrestling” to someone, it will be the first thing most people will think of… especially non-fans.

The talking-head sections are very good, but the majority of the documentary is really rather boring. The first issue is with the narrator, who could not be more monotone if he tried. Another negative is that it treads over well known and extensively covered moments in WWE history, so you find yourself tempted to skip to the next segment.

Bright spots are to be found though, with the behind-the-scenes footage of the Mr. T / Hulk Hogan vignettes to hype their match at the first WrestleMania being genuinely interesting. Ditto for the look at the creation of the Piledriver album, the genuine risks involved in putting on the first WrestleMania and what Vince & Linda were doing immediately after the show ended, WrestleMania III, the steroid scandal footage and the touching section on Owen Hart’s death (which is too short, but was nicely executed regardless). It’s also interesting to see that Vince was calling it “sports entertainment” when promoting the first WrestleMania, so it’s a real shot in the eye to those who complain that it’s a recent thing.

In addition, the look at the evolution of the Hall of Fame and the faith the promotion has in WWE Studios is refreshing.

The main problem with this (along with the recent Madison Square Garden retrospective) is that there is far too much footage and, well, history to condense into one release. If this was the first in a series of looks at specific eras, it would have been a much better concept.

This really comes to the fore when you get to the second and third discs. Apart from “Superstar” Billy Graham’s shocking win over Bruno Sammartino, there is nothing before 1987. This automatically eliminates half of the time-frame from when the WWWF came into being and the present day. As this is a look at the history of the promotion, to overlook half of that history is unforgivable.

It also doesn’t help that the majority of the matches and segments are available on countless other releases. This is something WWE were intentionally avoiding with most of the 2013 releases, so to see that slip for this one is a real disappointment.

If WWE had instead released this as History of WWE – 50 Years of Sports Entertainment (Volume 1: 1963 – 1973) and devoted a 2hr documentary plus two discs of matches / promos / segments to that single ten-year period, they would benefit in a number of ways.

First, they would make more money as they would be releasing five sets instead of one. Secondly, they could actually go into greater depth with each decade and provide a richer, more fulfilling history lesson to the fans. Thirdly, nothing would feel rushed and you would have less people having issues with what was omitted.

As it is, I cannot recommend this set as the documentary reveals very little that hasn’t been covered before, not to mention it is the dullest documentary WWE have released since I started reviewing for Wrestling 101.