“Bust out your Austin 3:16 shirt, strike a 5-second pose, heat up a delicious slice of pie and count down to Y2J all over again with The Attitude Era…

Go back to the days of dysfunction, disorder, and defiance. When radical antiheroes ditched “saying their prayers and taking their vitamins” for opening up a can of whoop ass and laying the Smackdown; when rebels ruled the airwaves and PG stood for “puppies and grapefruits.”

This 3-disc (2 Disc Blu-Ray) slobberknocker is packed with all the action that pushed censors to new limits, shattered cable TV ratings and crushed WWE’s competition like a Spanish announcer’s table.” 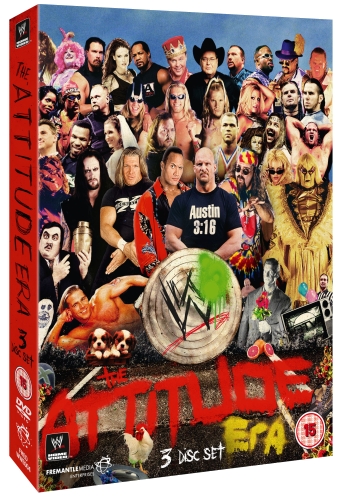 For the majority of wrestling fans over the age of (say) 25, The Attitude Era is the defining period of pro-wrestling at its peak. Mainstream acceptance on a level alien to today’s product, celebrities fighting over themselves to be featured (or even mentioned on WWE programming), fantastic acts on all levels of the card and the fabled Monday Night Wars at the heart of it all, it’s easy to see why us older fans look at the period of 1997-2001 with such affection.

For those younger fans, it’s can be hard to explain exactly why The Attitude Era worked so well or why so much of it was over to the extent it was. Of course, the stature of Austin and Rock are easy to fathom, as is the level of HBK, The Hart Foundation, DX, Kane, Undertaker, Mankind, etc in the level just below those two megastars.

But it’s the depth below that again, the talent that stoked up the lower and midcard ranks, that really encapsulate the difference. Almost everyone had a defining character or personality trait that made them stand out to a degree. From the Holly Cousins being “super-heavyweights”, Too Cool and Rikish dancing their way to the fans hearts, the thrilling three-way tag-team wars between The Dudleys, The Hardys and Edge & Christian (not to mention the rest of the tag division supporting them), to the thrilling Women’s Division spearheaded by Lita and Trish Stratus, the rise of Mr. McMahon and everything inbetween, The Attitude Era had a little something for everyone (with Gangrel’s whole gimmick still being one of my favourite acts from the period).

With all of that in mind, it’s very disappointing that the era only warrants a sub-60min documentary piece that skims over virtually ever aspect of the time period. A lot gets missed (to be fair, there was a lot of trash in the AE as well; something the rose-tinted glasses from the Nostalgia fashion house conveniently allow you to forget) and what is her gets skipped over in quick fashion.

Due to this, the main feature can only be classed as a disappointment considering what could have been.

Things pick up when the second and third discs are viewed as the segments and matches are a great trip down memory lane and a lot of them have held up well in the intervening years.

It’s here where the set becomes value for money and it’s here that those who missed it first time around can appreciate the finer moments (and some not so fine moments… I’m looking at you, Brawl for All) of the era.

Disc 1 has no fewer than twelve extras on here that cover a number of talents and their memorable segments in the latter part of the 90s into the year 2000. Highlights include a kayfabe-shattering interview with Goldust & Marlena, the introduction of the WWF Hardcore Championship, the still awesome “Jug Band” routine and KAZOOS!!!

Disc 3 isn’t so generous, but we do get a nice Hardys v Dudleys bout and Steph v Lita for the Women’s Championship.

The documentary is really good for what little content it has, but the pinnacle of WWE (at least from a money-making, creative and ratings POV) deserves much more than a single hour to relay the impact and legacy of the hottest period in pro-wrestling history.

Some of the talking heads are from previous releases (understandable when some of the talent works for TNA now), but they do their job and get across the importance of what WWE was doing at the time and the stellar rise of Austin and Rock from lower-card workers to THE premier wrestlers stars of their (or any other?) generation.

The matches and segments that make up the rest of the set are where you will be getting your money’s worth, with a lot of them having never been featured on previous releases, including matches most fans will have forgotten ever existed (Y2J v Eddie for the WWF Championship, Tag-Team Buried Alive Match).

Blu-Ray customers also get the following for their extra spendage -: