The Best of WWE at Madison Square Garden DVD Review 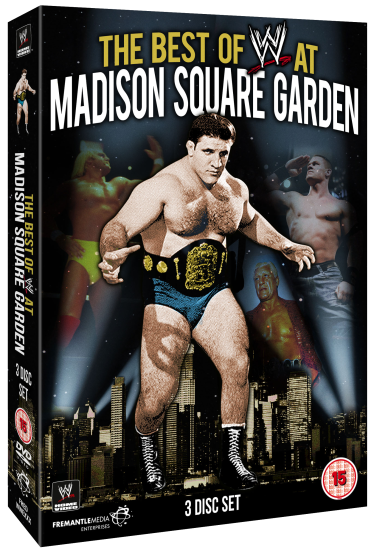 Whether you call it by the initials or the full name, if you are a follower of boxing or wrestling, the name alone evokes memories and expectations in equal measure.

Of course, in wrestling circles, Madison Square Garden is the home of WWE, due to the way the the people operating the venue ran it. Basically, they would only licence one promotion to provide them with wrestling content and this has always been WWE since the company’s creation.

Since 1963, when it was known as the World Wide Wrestling Federation, through its runs as the World Wrestling Federation to the modern-day WWE, “The Garden” always seems to have a special place in the hearts of wrestlers and fans alike. WWE also tend to push the boat out themselves when it comes to events in MSG, with at least one memorable happening taking place per show.

The layout for most WWE shows also helped (at least until the latest renovation) as the entranceway was located directly opposite the hard-cam instead of the usual position of the left side of the screen. This created a unique look and for the 2000 and 2008 Royal Rumbles added an extra dimension to the countdown / appearance of the next entrant.

This set covers from 1971 to 2009 and features a raft of performers making their name as only they know how. This takes the form of title changes, crazy stunts, “you had to be there / see it live on TV” moments, historic debuts and three WrestleManias, two Summerslam, two Royal Rumbles, one Survivor Series and numerous RAWs.

Taking the format of the recent Top 25 Rivalries DVD, the chronological rundown has a single talking-head discuss “The Garden” and then we have a match or a moment relating to that performer. It worked very well before and it works very well here.

There are a fair number of complete matches on here, with some providing the younger fans a great history lesson and the others being a great trip down memory lane for the rest of us… although how far that lane is depends on how old you are.

In addition to the matches, there are some great segments from RAW, including the first ever Stunner on McMahon, Triple H’s absolutely electrifying return in 2002 and the fantastic WWE debut of Cactus Jack (which features one of the greatest and most creative pre-match promos in history).

What an amazing DVD collection. The history lesson is great (albeit slightly revised as WWE are wont to do), the matches and segments are worthy of inclusion and the talking-heads all relay how much Madison Square Garden means to them, how symbolic the venue is and how important to the growth of the company those three letters represent.

However, there are issues. Picture / sound quality on some of the earlier bouts is rather poor, if not unexpectedly so. The original commentators are not present for some of the matches either, meaning Jim Ross fills in where required (and does a good job, for the record).

As the set begins in 1971, there is literally nothing at all of Bruno Sammartino’s record-breaking championship reign and run as box-office king at MSG. We do get a match featuring him against Billy Graham (who is as charismatic as they come in his prime), but this is not the Bruno we should have been seeing. Of course, this may be down to the quality of the footage, but it is still a glaring omission to have.

Also strangely absent is the barnburner of a Street Fight between Cactus Jack and Triple H at Royal Rumble 2000. This is another glaring omission, which can’t be attributed to to the graphic nature of the bout (which would be a no-no in this era), the unprotected chairshots and the fact we had just had a match between the two, as there are matches from the early days with chairs and blood aplenty.

WWE gets a lot of stick and some of it is warranted, but when you realise that they have been going for 50yrs this year it soon becomes apparent that maybe Vince McMahon knows what he’s doing after all. This collection encompasses that perfectly and if you are a fan of WWE, a fan of wrestling or a fan of wrestling history, you need to own this.

The only reason this does not get full-marks is because a lot of the content is repeated from other releases and the wealth of footage WWE must have in their vaults from MSG events mean another set is should be a given. That being said, we’ve all seen the powerbomb from Diesel to Backlund that won him the title, but I believe this is the first time that the entire segment (entrances, match, post-match) has been shown.

It also gets a mark on its own as we finally have Vince McMahon giving a reason for calling it Sports Entertainment rather than pro-wrestling.