By Clarkey
Classic WWF Reviews
This page contains affiliate links. At no additional cost to you, we may earn a commission if you click through and make a purchase. Learn more 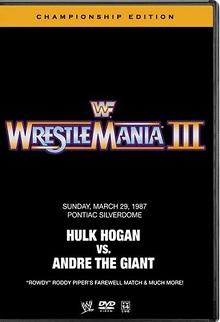 Two matches were the crux of proceedings, but such was their grandeur that this more than compensated for the misgivings of having the likes of Little Beaver rearing their head (unless that is to your fancy). Stipulations helped to set some precedents for the night, that in turn helped to cover for this lack of quality; with the opportunity to see the likes of Junkyard Dog bowing to ‘The King’ Harley Race, and Adrian Adonis loosing his glorious locks of golden hair; but this was a night that was never about the undercard, that for all extent and purposes was tacked on to fill in the gaps while the anticipation was quenched for the dual main event. Savage and Steamboat, the IC title, 90,000 fans screaming on; and ‘The Immortal’ Hulk Hogan, the unbeaten Andre The Giant, again 90,000 fans on the edge of their seats…even on paper you feel the opulence. In what today seems like a passing fancy, but is in fact the defining moment of WWF History, the highlight of Hogan body slamming Andre the Giant to great aplomb from the crowd really tingles the hairs on the back of your neck. It was supposedly the first time they wrestled each other. It wasn’t, but it doesn’t matter. It was supposedly the first time Andre was knocked off his feet. It was supposedly the first time Andre was ever body slammed. It was supposedly the first time Andre lost in his entire career. It was a slow, sometimes boring, horribly atrocious match, but none of it mattered then and in this review of the past glories it does not matter now. It was one of the greatest moments making this arguably the greatest night of wrestling history. Even despite all the matches and events since that have been better, this monumental feeling cannot be taken away and for this alone warranted another release of WM3. When you then couple in the proceedings with afore mentioned Steamboat and Savage, possibly the greatest match in WWE history, you have an event that would grace anyone’s collection if it did not already.

Seeing the spectacle of a filled out Silverdome just adds that extra layer of greatness, a feat that helps to get across just how eagerly anticipated these high aspects of this event were. It is this atmosphere that really adds that pinnacle of achievement to proceedings, the crowning glory of a glorious night. The Silverdome was and still is key in making the event what it was, with both the spectacle of it’s size enabling the obviously large crowd which were hooked from start to finish; but also the open air atmosphere allowed the transition to be seen as early evening progresses into night in a similar vein to the likes of the original Band Aid. It just gives that sense of splendour and adds an extra visual panache to the show on top of the nostalgic value. But it is also the little things that really cement together to make this event so special. The wrestler’s entering upon their little motorised rings being a small facet that reads like it would come across as old 80’s cheese, but in action it just gives across that warm and fuzzy feeling that good nostalgia brings. You would have to be the most stone and po-faced, senseless fool to not get caught up in the passion and aura of WM3, and that alone presents a prime reason as to why it warrants a re-watch today, and frankly many more times in the years to come. So it is fitting that the event has been re-released in the form of its Championship edition, to give those not enlightened the opportunity to become acquainted with the best of the old, and for fans to rediscover why we love the sport in the way we do. Everything about the event just helps to reassure why we love wrestling, and why we will continue to maintain our passion for the years to come, even if just for the cheese.

We are presented here a two-disc affair, with the first disc offering the original event in as close to the originals output as possible. The small matter of things such as the dispute with the World Wildlife Fund and the contractual issues of some of the entrances themes and other tracks means that the experience is not completely authentic, but it is the matter of tiny nuances affecting affairs rather than shoddy workmanship overall. In fact the WWE have offered an excellent package here, and set a new standard for what will now come to be expected of their future revisits to their PPV back catalogue. The second disc in particular offers an interesting alternative that on paper sounds quite faux pas, but in it’s realisation works a treat. Essentially taking the idea utilised on shows such as VH1’s Pop Up Video, the option is presented to watch the whole event with pop-up facts and tidbits offering interesting insights into proceedings and presenting a decent reason to re-watch through if only to reassure some facts that you may not have already discovered from biographies and wikipedia. With commentaries, insights and an introduction from some man named Vincent Kennedy McMahon, it offers the crux of this package, making it more than a worthwhile purchase even if you are one of the many that already purchased the WM Anthology. It is this abundance of extra material that makes this DVD so highly recommended beyond the allure of just the wrestling event offered. The wealth of material offers both the facility to help to fill the gaps for those not enlightened with the build up to the card during their original run but also for those who did get the chance to relive their youth fully and glance at the things as a package that helped to build their childhood loves and hates. The SNME and Challenge footage are particularly welcome, as are the wealth of insightful interviews offering that extra layer of depth.

There is a great deal of interesting extra’s here to enjoy that really can’t come better recommended, and with this the WWE have set a precedent for their future releases of this ilk that only bodes well for us the fans. With their vast video catalogue both WWF/WWE and otherwise, it raises some interesting possibilities and pipe dreams that could become reality. But again, that is because of the success of this package and all that has been comprised here to great effect that allows such thoughts and for this the WWE deserve good kudos. So to sum up matters, the WWE could have lazily re-released another version of WM3 and counted the dollars fly into the coffers on the back of the spectacle of the event itself, but the fact that they have not rested on these laurels and acted to offer so much to the fans with their introduction of the second disc and particularly with the experiment with the pop up facts deserves applaud. This is a DVD that really should be championed if one was to pardon the pun, and does justice to the WWE’s legacy and as afore mentioned sets a new precedent for them to match with their future releases in a similar vein. Snap this up with both hands, it is rare you’ll find a bargain this good.